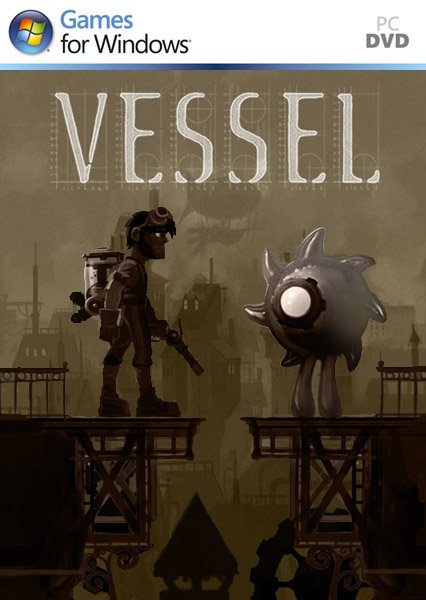 I would recommend Vessel not just to anyone who enjoys a more cerebral gaming but to those that enjoy videogames in general. It’s that good, and that charming.The debut title and personal brainchild of Strange Loop Games’s John Krajewski ,  Vessel is the sort of game that only comes along once a year. It’s a 2D side-scrolling Metroidvania adventure that shows off a complex mixture of tight gameplay, quirky story-telling and is overall, a testament to the rock solid indie development that went into it.

The main quest follows your playable character M. Arkwright as you guide him through a story, which, although interesting, has its highs and lows. What’s not in question is the presentation, which is so delicately and thoughtfully portrayed it helps to keep you invested in the narrative. You’ll feel like every pixel of this game was perfectly planned. The puzzles from the very tutorial of the game are so intuitive and well thought out that it doesn’t even feel like you’re being taught the game.  Sound effects are rudimentary, but hits strong notes in the atmospheric category with convincing and immersive ambient music. The pacing of the introduction to all the different mechanics keeps you just on the edge of feeling too familiar with the puzzles.  As soon as you feel like you’re getting the swing of things – a new mechanic is introduced, to retain the freshness to the experience. Gameplay wise, Vessel is largely a game about the manipulation of liquids. The liquids – the ‘fluros,’ as they’re called – are creatures Arkwright created, which have largely replaced human labour in the factories and foundries where most of the levels take place.  The way that Vessel implements these elements and your interactions with them is so clever, unique, and well-designed that you’ll find it difficult to put down. Controls are initially a bit odd, but after that subtly designed tutorial stage, you’re ready to play Vessel for all it’s worth. The Metroidvania inspired gameplay is standard but very well executed and really shines in the ways you attain your goal. Vessel has some of the most intriguing and difficult puzzles I’ve played in a long time.

It’s not often that a game comes along that shows off creative design, and asks the players to draw from their own creativity. Vessel demands as much from its players with its demanding design as it did from its developers with its unwavering innovation. Vessel is a game that anyone who enjoys quality will find immense value in. The beautiful and organic looking hand drawn 2D backgrounds are stunning to look at, and the gameplay is top notch throughout.

Vessel is a game that anyone who enjoys quality will find immense value in. The beautiful and organic looking hand drawn 2D backgrounds are stunning to look at, and the gameplay is top notch throughout.
REVIEW SCORE
9
File Under: Action, cyberpunk, Indie Game, PC