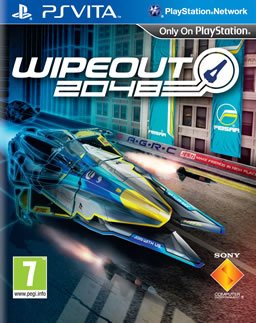 The King Is In Good Shape

Wipeout has been one of the defining titles in Sony’s library of games, being everything from a showcase for their hardware’s graphical capabilities to an ambassador of cool to the public at large. It is a series known for its demanding skill requirements and cutting edge style. Whenever you talk about the future of games, Wipeout always manages to sneak in at least a mention. And now, with Sony’s Vita, one of their flagship titles makes another strong debut.

The Need For Anti-Grav Speed

Sony’s Liverpool studio took a slightly different approach with their latest game, as can be easily seen by the name. Wipeout 2048 takes a look at the Future-Past with a visitation to the period when anti-gravity racing first became widespread and dedicated tracks had yet to be constructed all over the planet. This is not the super sleek, aerodynamically approved future of the previous games. Instead, portions of tracks have been grafted onto everyday streets recognizably our own, and even the Anti-Grav racers themselves have a whirr and whine similar to the engines of today. The overall presentation of the game is a small but noticeable downgrade for those paying attention; after all, the last version, Wipeout HD and its Fury expansion were running on a PS3 at 1080p with a variable frame rate that averaged 60 frames per second. The Vita doesn’t have access to that resolution and horsepower, although it manages to clock in at a very respectable, very solid 30 fps.

Unlike Wipeout HD, this is all pretty much new content. The racing tracks are new, so is the music, and a large array of tweaks have been made to the basic gameplay to give it a fresh feel. 10 tracks are spread across three racing seasons, and players start off with a small selection of ships that are gradually unlocked through leveling up and completing optional races. Small but clever design changes have been implemented into the racing, such as the division of offensive and defensive pads; yellow pads grant missiles, rockets and the like, while green gives shields, leech beams and auto-pilot. It adds a small but significant extra strategic layer to racing as players now have a choice about which kind of enhancement they want to add to their AG racer, whereas before, players simply ran over a red pad and dealt with whatever they got. The campaign has also gotten an unusual tweak to progression that makes the game more accessible to neophytes without compromising on the high level of skill that peak gameplay demands. Players still engage in normal events such as best lap times, normal races—with combat—and specialized races focusing more on kills than finishing placement. The key difference is Wipeout 2048 now awards a “basic” pass and an Elite Pass for advancing through these courses. So normal races might require a player to only finish at a minimum of fifth place—out of eight racers—in order to be considered a “success,” whereas only a first place finish will qualify for an Elite Pass. Anyone can play and finish this game now without requiring a massive time commitment to practice, but only those that put in the practice will get those Elite Passes.

Unfortunately it’s not all wine and roses for Wipeout 2048. The game, as expected, uses the touch screen features, and while it’s fine for menu navigation, the touch and tilt oriented controls are still not as accurate as the traditional controls. The traditional controls themselves are also hampered somewhat by the small size of the analog sticks but this is something that can be overcome with familiarity. There’s also an issue with some tracks being more difficult to “read” than past tracks in the series. The streamlined look of past games made it easy to see where the track was going and how to turn, but the more cluttered and crowded textures of 2048 occasionally make it difficult to see the track layout and requires more aggressive memorization on the part of the player. Finally, although the game does sport both online play and even cross play across the PS3, the online play itself lacks the depth of Wipeout HD, giving players little choice in what kind of matches they find themselves in. You basically just log in, hope for the best and race whatever event you find yourself in, rather than customizing your lobby selection. Lastly, there’s the surprising length of load times, something not expected from a game on a cartridge.

These are relatively minor criticisms of what is undoubtedly one of the strongest launch titles on the Vita yet. Fans of the Wipeout series can buy this game in confidence, and for people who aren’t familiar with the franchise, this is a much more friendly introduction that also shows off what your Vita can do. If you’ve got nothing against racing games, this is currently the best of the Vita’s crop.

Sony’s Liverpool studio took a slightly different approach with their latest game, as can be easily seen by the name.
REVIEW SCORE
9
File Under: