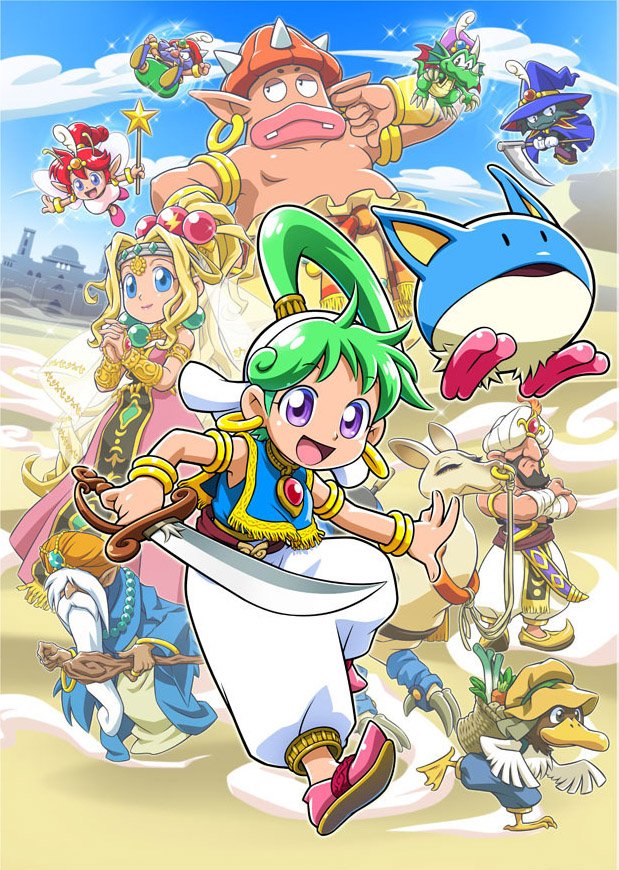 Back in 2017 I remember playing Wonder Boy: The Dragon’s Trap on my Switch and enjoying myself to the point where I decided to go back and eventually try some of the other games in the long-running series. Despite not having played the highly acclaimed Monster Boy and The Cursed Kingdom that released in 2018, I did take the time to play some of the legacy titles such as the original Wonder Boy and of course, Monster World IV.

To the uninitiated, Wonder Boy and later, its spin-off series, Monster Boy were originally Arcade games that eventually found their home on consoles such as the Sega Genesis, which is the case for Monster Boy IV. Both Wonder Boy and Monster Boy titles are side-scrolling platformers with elements of Metroidvania that generally come in the form of a central hub town and large and sprawling dungeons that make up the bulk of the gameplay.

Wonder Boy Asha in Monster World is a faithful remake of the 1994 classic, the aforementioned Monster World IV. Unlike Wonder Boy: The Dragon’s Trap and Monster Boy and The Cursed Kingdom, which both went with a 2D aesthetic that modernized its sprite-based counterparts, Asha in Monster World instead opts for a fully 3D rendered world, for better and for worse. Those interested in playing the original can do so by purchasing the retail boxed copy of the game, available for both the Nintendo Switch and PlayStation 4.

Right off the bat, anyone with experience with the original Monster World IV title may find this remake a bit jarring, even unpleasant at times, of course, ultimately, this all comes down to preference, as the game as a whole feels very much like its original when it comes down to gameplay. Finding the right way to play the remake will likely also contribute to how much you enjoy your time with Asha in Monster World. I initially found the 3D graphics to be somewhat bland and lacking the original charm, but thankfully, most of this was masked when played in portable mode.

In fact, some of the rougher looking areas of the game translated very well onto the smaller screen of the Nintendo Switch, giving it the illusion of 2D cel animation, similar to the game Dragon Ball FighterZ (although not nearly as well-realized). Unfortunately, the move to full 3D models is an uneven one, with certain characters looking great while others, particularly lesser enemies such as the slimes, looking rudimentary and at times amateur.

Although I did not have access to the PlayStation version of the game, one area in which I was disappointed in, even for a Switch game, was with Wonder Boy Asha in Monster World’s performance. For the most part, the game seems to be locked at 30FPS with occasional dips that fortunately never distract from gameplay. However, for a game that uses simple cel-shaded assets, the slower FPS made the game feel uncharacteristically sluggish and, overall, less responsive than the original, which will likely be a deal-breaker for purists.

Ultimately the 3D elements add little to gameplay, aside from lively cutscenes and some mildly amusing transitional sequences that let players explore the foreground and background in ways not possible in the original. Overall, I would have prefered a hand-drawn approach in bringing Asha in Monster World‘s remake to life, mainly if it meant having a higher or more stable FPS. It is likely, the 3D approach was just the more economically safer route, as sadly, Asha in Monster World screams budget, from its uneven level of polish to its 1:1 translation of the Sega Genesis/ MegaDrive script (complete with grammatical errors). Despite this, however, Wonder Boy Asha in Monster World is still a fun game and is just long enough to feel worth its entry price without feeling like it is overstaying its welcome. The game is spread across six stages and a main hub area in which Asha can talk to various NPCs, upgrade her gear and find hidden treasure in addition to ways to proceed further in the main game.

In Asha in Monster World, gameplay can feel deceptively simple, with Asha having a single sword attack, a shield and a pet that allows her to double jump and grab items just out of her reach. In reality, however, the game does an excellent job in utilizing its simplicity by slowly ramping up its difficulty by gradually asking the player to perform more precise movements to proceed, such as saving Asha’s double jump energy efficiently in order not to get hit by hazards. Or having the player jump on a sequence of enemies (Ducktales style) to get rid of them quickly.

At the end of the day wonder boy asha in monster world is a no-frills remake that at times feels a little rough around the edges but ultimately does a well enough job in modernizing the 1994 classic.
REVIEW SCORE
7
Buy On Amazon
File Under: Retro