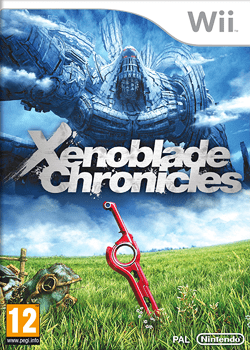 After getting a lot of hype from our neighbors overseas, Xenoblade Chronicles has finally made its way to North American with some considerable expectations. There have been whispers of it being one the of the finest RPGs of its generation and certainly the best on the Wii (which admittedly, doesn’t offer a hell of a lot of competition in the genre). Well, the game is finally here and the good news is, the hype is justified. This is a fantastic RPG with enough twists in the established formula to enliven what is starting to become a somewhat dated genre. It’s not perfect of course, marred by sluggish visuals that undermine the epic scope, some occasionally laughable voice acting, and a plot that at times can be hard to follow or even care about. But despite any of the nitpicking us critic folk like to do, this is a pretty sweet game and an epic experience designed to suck your social life away until you have no friends, but an amazing in-game ranking.

The setting for Xenoblade Chronicles is one of its most entertaining elements. Long ago there were two giant robots engaged in a battle for so long they eventually rusted into place and fossilized over time. In fact, they’ve been stuck in that position for so long that entire eco systems have grown on their backs and humans have started to colonize the place. How’s that for anime awesomeness? The plot is a little more RPG-by-the-numbers. You play an orphan boy who is the only person who can stop his world from an unstoppable force with the help of a mythical weapon (stop me if you’ve heard this one before). In this case, that orphan is one of the humans living in a colony on the giant space robot’s back and unfortunately an evil mechanical race called the Mechons discovered the humans and decided to feast on their fleshy goodness. So it’s up to you and few fellow survivors from Colony 9 to man up, level up, and kick some Mechon butt.

This being an RPG, that story will take a long, loooooooong time to play out. We’re talking dozens of hours here folks, but on the plus side the formula is a little different than usual. Yes, there’s a central quest with massive cut scenes to suck up most of your time, but the game also throws in open world gameplay elements. Between your big ol’ quests, you can explore the grassy terrain and mechanical caves for side quests that will take you to the farthest corners of the map. Completing all the side quests will extend gameplay exponentially for shut-ins. I can’t pretend I did them all for the sake of maintaining a small semblance of a life outside of the game, but you will have to at least do a few. Yes, side quests are theoretically optional, but if you want to level up enough to make it through epic boss battles or collect items to help you out, some of these will be necessary.

The battle system in Xenoblade is possibly it’s greatest strength. It’s an interesting mix of straight fighting action and more strategic RPG-style gameplay. You’ll attack automatically, but have the freedom to move characters around during fights to dodge and unleash special moves at right time or join forces with teammates for big ol’ combined attacks. You’ll have to juggle a lot of things in your head at once to win fights, which can be confusing at first, but once you adjust, the fight system is rather ingenious. Then there’s that special weapon I was alluding to earlier. Your big weapon is called the Monado and it lets you see the future. Mid-fight, you’ll suddenly see an opponent lay out a deadly special move in slow motion. Then things go back to normal, giving you a few moments to anticipate, block (with a magic shield, obviously), and counter. It’s clever and really livens up the big boss battles. As you’d imagine, the whole “ability to see the future” thing also comes up in the story with slightly cheesier results.

So, pick up this game and you get a deep, immersive, epic RPG experience with some nice new twists in the format. Sounds perfect, right? Well, it is a pretty damn solid game, but not perfect. The big problem is that this game is on the Wii. First off, if you don’t own a classic controller, you’re going to find the Wiimote/nunchuck controls very cumbersome. More importantly while this game has some solid graphics by Wii standards, it very much looks like something a title created for outdated hardware. Nintendo franchises like Mario or even Zelda worked fine with the low-horsepower system because they are supposed to look somewhat cartoony. However, with a game trying to convey a scope as massive of Xenoblade, the little white system just can’t keep up. For the sake of graphics alone, this thing probably should have been made for an HD system. However, Wii-lovers have been bemoaning the lack of an epic, hardcore gaming experiences on their little system for years, so at least they get it here. As a result of the technical limitations, the character designs look pretty clunky with generic costumes that at times can make the characters hard to distinguish and certainly makes it almost impossible to empathize with them during the emotional beats of the story. Then there’s the matter of the voice acting, which is about as credible as any game in this genre that forced voice actors to commit to dozens of hours to cranking out dialogue they barely understand. The weird choice is that all the actors are British. At first it’s kind of fun to hear a variety of English accents slipping out of anime characters’ mouths, but when the evil robots start speaking with ridiculous cockney accents, it’s hard not to laugh.

Yep, Xenoblade isn’t a perfect game. It’s filled with problems both inherent to the Wii and the genre. However, all of those issues were kind of a given before cracking the plastic on an RPG made for the Wii and this title definitely excels on its own terms. The fight system is fresh, the world is evocative, and the game just as epic as you’d hope (including boss battles that clock in at over an hour). If you love RPGs and own a Wii, you’ve simply got to pick it up. If you have no particular fondness for the genre, it will be a bit of a slog with a steep learning curve. The experience is so smooth, that’s it’s probably not a terrible title for players looking try an RPG for the first time. However, if you haven’t gotten into RPGs by now, Xenoblade won’t convert you. Games have changed so much over the last few generations and new genres have developed offering just as epic of a gaming experience with simpler mechanics and more action. RPGs aren’t going anywhere, but chances are the audience for those games will become more selective. I can’t say that Xenoblade is an experience that every Wii owner will enjoy, but if you like RPGs, get ready to shut off your life for a few weeks and lose yourself in this wild world.

The setting for Xenoblade Chronicles is one of its most entertaining elements. Long ago there were two giant robots engaged in a battle for so long they eventually rusted into place and fossilized over time.
REVIEW SCORE
8
File Under: Nintendo, RPG, Wii