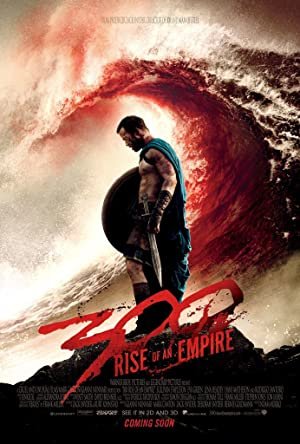 In the ancient days of 2006, the young picture-maker Zack (son of Snyder) did see fit to honor the ancient Spartans’ homoerotic heroism. Armed with the artistically xenophobic and ultra-violent words of the sire Frank Miller, young Snyder did prove to separate the masses from their pouches of silver. An eye-tingling combination of CGI, preposterous beards, greased male bodies, and blood-spattered battle did charm the lords and maidens of the land and a hit was born. T’was thought that the tale was one-and-done, but lo’ the moneymakers at Warner Brothers did see fit to continue the saga and slay the masses with a plague of sequels. Thus, 300: Rise Of An Empire was unleashed upon this humble movie-servant’s eyes. I was pillaged by 3D limb shedding, gratuitous nudity, a wondrously campy performance from the good lady Eva Green, and needlessly grandiose dialogue like the words that flicker before your eye-holes now. The second coming of the Spartans did not prove to cleanse my soul or right my ways, but the R-rated spectacle did raise my pulse and thus I did not hate the sights I cannot unsee.

So yeah, if you saw 300, you can pretty much guess what you’re getting here. Aside from some recycled footage from the first flick, Gerard Butler isn’t back and without Snyder calling the shots, the slo-mo/fast-mo action scenes are toned down considerably. Other than that, it’s more of the same (though he did write the script and it shows in all the worst ways). Our bearded, shirtless, pantless hero this time is Sullivan Stapleton, whose Australian tones fill the mouth of Themistocles Of Athens. With the Persian army still a threat, the Greek armies have united to combine their forces. They are still outnumbered of course, but they growl louder than the bad guys and grease their bodies up like pro-wrestlers, so you gotta’ love em! Sullivan’s task is to lead the Greek naval fleet into battle against the much larger Persian fleet. The evil army is led by Artemesia (Eva Green), a Greek castaway turned warrior Queen who is not only beautiful and a killing machine, but was also secretly responsible for the sexually ambiguous Persian God-king’s rise to power. There’s more plot going on than what was just described, and it’s constantly laid out in needlessly grandiose and confusingly wordy voiceover. Thankfully, it doesn’t matter much. All that matters is that you understand Frank Miller’s racially sensitive message of Greeks = good, Persians = bad and keep track of who’s who as the endless battle scenes unfold.

First off, it has to be noted that 300: Rise Of An Empire pushes its R rating harder than any studio action film in recent memory. Director Noam Murro’s primary goal with the film seems to have been to set the Guinness World Record for most blood flung at a 3D camera. Despite the faux-profound dialogue, Murro essentially shoved any sense of historical drama self-importance aside to make a 70s exploitation movie with a 2014 Hollywood budget. When the movie hits its high points, that seems like it was a noble goal. The trouble is that as everyone who has watched their share of 70s exploitation movies knows, they are generally crap. Sure Murro stages some gorgeously disgusting violence, but the ham-fisted storytelling undercuts the gratuitous pleasures more often than not. All of the heroes are indistinguishable in personality and recognizable only by facial hair. The simple narrative feels needlessly complex thanks to clunky voiceover and needlessly stylized dialogue. Granted, these were problems with the original film as well. But at least there was strong enough narrative through-line and enough charismatic actors to make the material easy to follow/swallow. The only reason to watch this movie is for the hard-R mayhem and sadly the irritating self-serious storytelling makes that almost impossible to enjoy.

Actually, I’m being too harsh. There is one other major pleasure beyond the violence: Eva Green. Though she’s given dialogue just as horrendous as her castmates, Green has served up a deliciously vampy female villain the likes of which is rarely seen in Hollywood and she runs with it. Green’s deliriously unhinged performance breathes life to the digitally manufactured “epic” every time she’s onscreen, and she commits fully to the role in a way that is almost hypnotic (she has one sex scene that’s shot like a fight sequence and has to be seen to be believed). If Green had a hero as compelling as her to bounce off of, 300: Rise Of An Empire might have ended up being at least as good as the original flick. Sadly, that’s not the case. This sequel is pretty mediocre in most ways, but does certainly hit some high notes whenever blood is being shed in ridiculously stylized ways, Green acts up a storm, or both. If you enjoyed 300, the flick is certainly worth a look for its gratuitous highs. However, aside from the 3D, it might be a film best enjoyed at home with a fast-forward button on hand to speed through the many rough patches. Approach with caution and under no circumstance should you consider making the film a family outing. Well, unless you want to give your children a reason to see a psychiatrist in 15 years, of course. In that case, hat’s off to ya’, family man!

First off, it has to be noted that 300: Rise Of An Empire pushes its R rating harder than any studio action film in recent memory.
REVIEW SCORE
5
File Under: Blockbuster, Comic, Comics, Film, Frank Miller, Zack Snyder