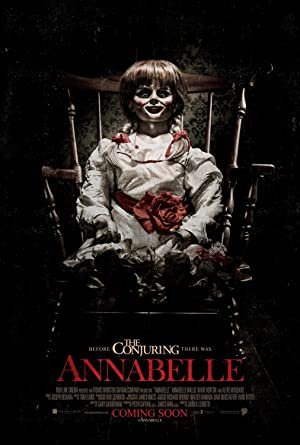 It’s not often that an inanimate object gets a spin off movie, but something about that creepy puppet in The Conjuring just seemed to capture the public’s imagination. Well, there’s that and the fact that The Conjuring pulled in $300 million worldwide to make it one of the most successful horror movies ever made, and Warner Brothers was not going to let that sort of success pass by without a sequel. So, now we are just barely a year after The Conjuring and a prequel that was never intended to happen is here. As you’d expect from a movie with a rushed of a production schedule, the results are mixed at best and completely disposable at worst. Annabelle has its moments, but it’s also directed by the cinematographer of The Conjuring rather than anyone involved in the creation of the original story. It’s also worth noting that the only other movie that John R. Leonetti has directed in the midst of a successful career as a cinematographer is Mortal Kombat Annihilation. Don’t worry, he’s gotten better since then. Just not by that much.

The plot involves an impossibly pretty, perfect, married, and pregnant couple played by Annabelle Wallis and Ward Horton. In the opening scenes, we see them play Ken and Barbie in the late 60s suburban equivalent of the dream house. She also happens to collect dolls, so Horton buys her the massive and already creepy Annabelle doll, which she finds cute for some unexpected reason. Then tragedy strikes when the lost daughter of their neighbors unexpectedly returns with a Charlie Manson cult leader boyfriend. They kill her parents then jump into Ken and Barbie’s house, leaving the pregnant Wallis stabbed, and the Annabelle doll covered in blood in their wake. A few months later, Wallis and Horton are living in a very Rosemary’s Baby-esque apartment with their infant daughter. Even though they tried to throw out the Annabelle doll before moving, it shows up in the new apartment and soon all sorts of supernatural shenanigans a la The Conjuring are going down. At first it seems like the work of ghosts, then demons. Eventually both a crusty priest (Tony Amendola) and a sassy bookshop owner/demon expert (Alfre Woodard) show up to help. Needless to say, things don’t end well.

..the script for Annabelle is essentially just a collection of scenes from other, better horror movies strung together pretending to be something new.

In addition to being a rushed production, the script for Annabelle is essentially just a collection of scenes from other, better horror movies strung together pretending to be something new. The Conjuring is knocked off quite a bit, which goes without saying. But so is Insidious, Rosemary’s Baby, and most embarrassingly Mario Bava’s final film Shock, which Leonetti stole a brilliant scare from wholesale (unsurprisingly, it’s also the scare that got the single biggest reaction in the screening that I attended since it was crafted by an actual master of horror). Obviously, it’s all too common for horror filmmaker to borrow, copy, and steal from the past. However, this is a particularly harsh example, especially since the one scare sequence that wasn’t copied from a horror classic (the cult killings that were merely stolen from the Manson Family murders in an act of horribly bad taste taste) is easily the best part of the movie and works incredibly well. Leonetti actually pulls off a few strong set pieces, the trouble is that almost all of them occur in the first half hour of screen time. As the movie rolls on, it gets increasingly repetitive and dull when it should be kicking into high gear. By the time the sequel-baiting finale arrives, it’s hard not to be completely frustrated by this cynical attempt to manufacture a franchise out of a previous success masquerading as a horror film.

It also doesn’t hurt that after the surprisingly strong cast of The Conjuring, the acting in Annabelle is universally awful. Everyone who appears on screen either mugs melodramatically or sleepwalks through scenes woodenly. There’s not a moment of believable performance here, which makes it all hard to take seriously. Likewise, the plot is lumpy and poorly paced making it a slog to get through. There’s one consistently strong element in the movie as well as one decent performance and both are the puppet Annabelle. Just like in The Conjuring, there’s something inexplicably unsettling about this puppet itself and it doesn’t even have to do anything to elicit chills. It just has to be captured in a decent camera angle with ominous music playing to give viewers the willies. While it would be nice for the franchise to stop here since it’s so clearly a passionless commercial product, the central puppet is strong enough to hinge a solid horror flick around if Warner Brothers were to hire a director with even a competent grasp of storytelling for the job. If there has to be a sequel, hopefully some more talented people come on board. There is probably a good horror movie to be made around this creepy prop, but Annabelle sadly isn’t it.

Annabelle has its moments, but it’s also directed by the cinematographer of The Conjuring rather than anyone involved in the creation of the original story.
REVIEW SCORE
5
File Under: Film, Horror, Prequel