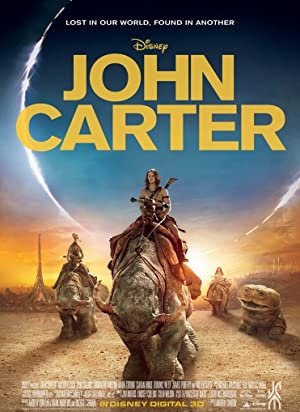 One century ago, author Edgar Rice Burroughs (of Tarzan fame) wrote an epic space fantasy series about a man named John Carter who traveled to Mars and got caught up in all sorts of action-packed adventures in the middle of a complex mythology. The books have become somewhat of a legend in sci-fi geek circles, having served as an open influence on everything from Flash Gordon to Star Wars and Avatar. For years the stories were deemed to vast and technically demanding to be brought to the big screen, but now Disney has decided the time has come for the classic to play on massive IMAX screens in 3D via multi-Oscar-winning Pixar director Andrew Stanton (Finding Nemo, Wall-E). In theory, this should be the geektacular blockbuster we’ve all been waiting for, the movie that all our favorite franchises only dreamed of being. So is John Carter a new classic destined to shift action figures and T-shirts to parents-basement dwelling Comic-Con attendees everywhere? Well…no, but at least it’s not from lack of effort.

gravitational pull, he can now leap long distances in a single bound and has super strength. He needs it too because he’s quickly kidnapped by Mars’ restless natives, 8-foot tall, four-armed, green dudes known as the Tharks. However, he soon discovers their tribal culture doesn’t rule the planet. No, two humanoid races known as the Zodangas and the Heliums battle to rule the planet with their strings pulled by the invisible super powered beings known as the Holy Therns (led buy bad guy specialist character actor Mark Strong), who delight in creating conflict and watching alien worlds destroy themselves. John Carter discovers this through a feisty kidnapped princess (Lynn Collins) who is at first repelled by, then irresistibly attracted to his roguish ways (sound familiar?). They fall in love and John Carter becomes a hero by battling through the many races and flying around on fancy ships.

As you probably noticed, there’s a whole lotta mythology in there for a movie that squeaks past the two hour mark and cramming all that backstory in while still creating a rip-roaring adventure is Andrew Stanton’s greatest challenge. Through his years at Pixar, Stanton developed a knack for succinct storytelling and glossy CGI set pieces and puts all of that experience to work on John Carter (which was apparently a passion project he’s been nursing along for years and dreaming of since childhood). Unfortunately the story is just too unwieldy for even a filmmaker with as much wit and skill as Stanton. There’s a commonly held belief that it was the seemingly insurmountable technical challenges associated with Burroughs’ stories that kept them from the big screen until now, but having seen the results I’d guess the real stumbling block was that the story was simply too vast for a single film. I’m sure that when reading the books the complex mythology is a joy to slowly sift through and explore. But much like the ill fated Dune movie proved, that stuff all turns into exposition on the big screen and it’s far less interesting to watch actors struggle to spit out pages of backstory then it is to read it and imagine.

It certainly doesn’t help that both Kitsch and Collins are walking voids of personality and a deeply boring central pairing. Mark Strong is better as the villain, but he’s doing an act we’ve all scene before and is barely present in the running time. The most interesting characters are actually the 8-foot green Tharks, masterfully created by a team of CGI wizards and motion-capture performances from the likes of Willem Dafoe, Thomas Haden Church, and Samantha Morton. Unfortunately, those creatures are mostly relegated to B-stories while the human characters waste chunks of time trying to spoon feed the complex plot to the audience. Between the bland performances and the hastily condensed writing, there aren’t many compelling characters for the audience to latch onto, leaving the film to live and die on the strength of the spectacle.

With a mammoth budget in the neighborhood of $250 million and a technical genius calling the shots, the film is at least filled with impressively detailed worlds and long pulse-raising action set pieces. They zip in and out of the story in regular intervals and deserve to been seen on the biggest possible screen. Unfortunately there’s a major problem here as well. You see, it wasn’t just the ideas and mythology of Burroughs’ tales that have been pillaged by other filmmakers over the years. The alien worlds feel like a combination of images from Star Wars, Avatar, and Dune and even if it was those works ripping off John Carter, they came first so it doesn’t feel that way. Even the major set pieces feel overly familiar, with Lucas having stolen Return Of The Jedi’s speeder bike chase and the giant beastie Coliseum battle from Attack Of The Clones wholesale from Burroughs’ work. Stanton still whips up some stellar showpiece sequences, but there’s a prevailing sense that we’ve seen it all before and in a fantasy film that strives to transport audiences to new magical worlds, that’s a pretty major problem.

Now I don’t want it to sound like John Carter is an unimaginative disaster. That’s unfair. This is a perfectly fine sci-fi fantasy blockbuster executed with skill, style, and no expense spared. I’m certain that the target audience of 12-year-old boys will have one hell of a time at the theater. However, Andrew Stanton clearly wanted John Carter to be more than a decent blockbuster of the week and the source material deserves more than that. Sadly, this project may have spent just a little too long in development and ultimately it doesn’t work as well as the rip-offs produced by the likes of George Lucas and James Cameron. The fact that this movie is coming out in early March tells you everything you need to know. If Disney truly believed they’d created the first chapter in the next big franchise, they would have debuted it in the summer blockbuster season to take some swings with the big boys. But, someone wisely figured out that wasn’t the case and decided to put it out with no competition to bring in as much cash as possible. It was a sound business decision, but one that proves John Carter ain’t going to be the new marquee fantasy franchise to take the reigns from Harry Potter. I’d imagine this will be the last time with see Burrough’s iconic character in a movie, unless the franchise is quickly relegated to Disney’s endless slate of direct-to-DVD sequels.

Now I donâ€™t want it to sound like John Carter is an unimaginative disaster. Thatâ€™s unfair. This is a perfectly fine sci-fi fantasy blockbuster executed with skill, style, and no expense spared.
REVIEW SCORE
6
File Under: