Oscar-winning director Danny Boyle got a lot of praise for helming the opening ceremonies in London last year and it was the moment when he officially became a national treasure in the UK (expect a knighthood shortly).

Fair enough, he’s a major talent and deserves it. The trouble is that those of us who have been with Boyle from the beginning remember him more as an underground cult figure who shove a big middle finger towards the Merchant Ivory British filmmaking establishment with the bleakly comedic one-two punch of Shallow Grave and Trainspotting (not to mention the fact that he arguably kicked off the zombie renaissance of the 2000s with 28 Days Later). Well, the good news for all us filthy film fans is that while Boyle was making Britannia magical for the Olympics, he was also taking days off to shoot Trance around the streets of London to satisfy every one of his filmmaking inclinations that were not allowed in the sweet n’ optimistic Olympic gig. It’s a nasty, violent, cynical, sexy, delirious work of dirty entertainment that reminds audiences what subversive little soul that filmmaker can still be when given the chance.

So, the story. That’s where things get tricky. This is one of those movies with a narrative that shifts gears and confounds expectations every few seconds, nimbly combining genres and toying with conventions like it ain’t no thang. I’ll try to keep things vague. James McAvoy stars as an art dealer who has fallen on hard times and decides/is forced into being the inside man on an art heist. The heistable painting in question is Goya’s “Witches In The Air,” which is worth about $25 million. So, McAvoy partners up with the great Vincent Cassel and a gang of thieves to pull off the big score. Unfortunately something goes wrong (as always tends to happen in heists) and Cassel smacks McAvoy on the head with a shotgun. That bump ends up being rather troublesome when McAvoy awakes and can’t remember where he put that pesky painting. Fortunately (or perhaps unfortunately) Cassel gets the smartypants idea of signing McAvoy up for hypnotherapy with the always beautiful Rosario Dawson. The hope is that she’ll be able to dig out McAvoy’s repressed memories, but of course hypnosis has a way of digging up more than intended, plus you know…mind control. 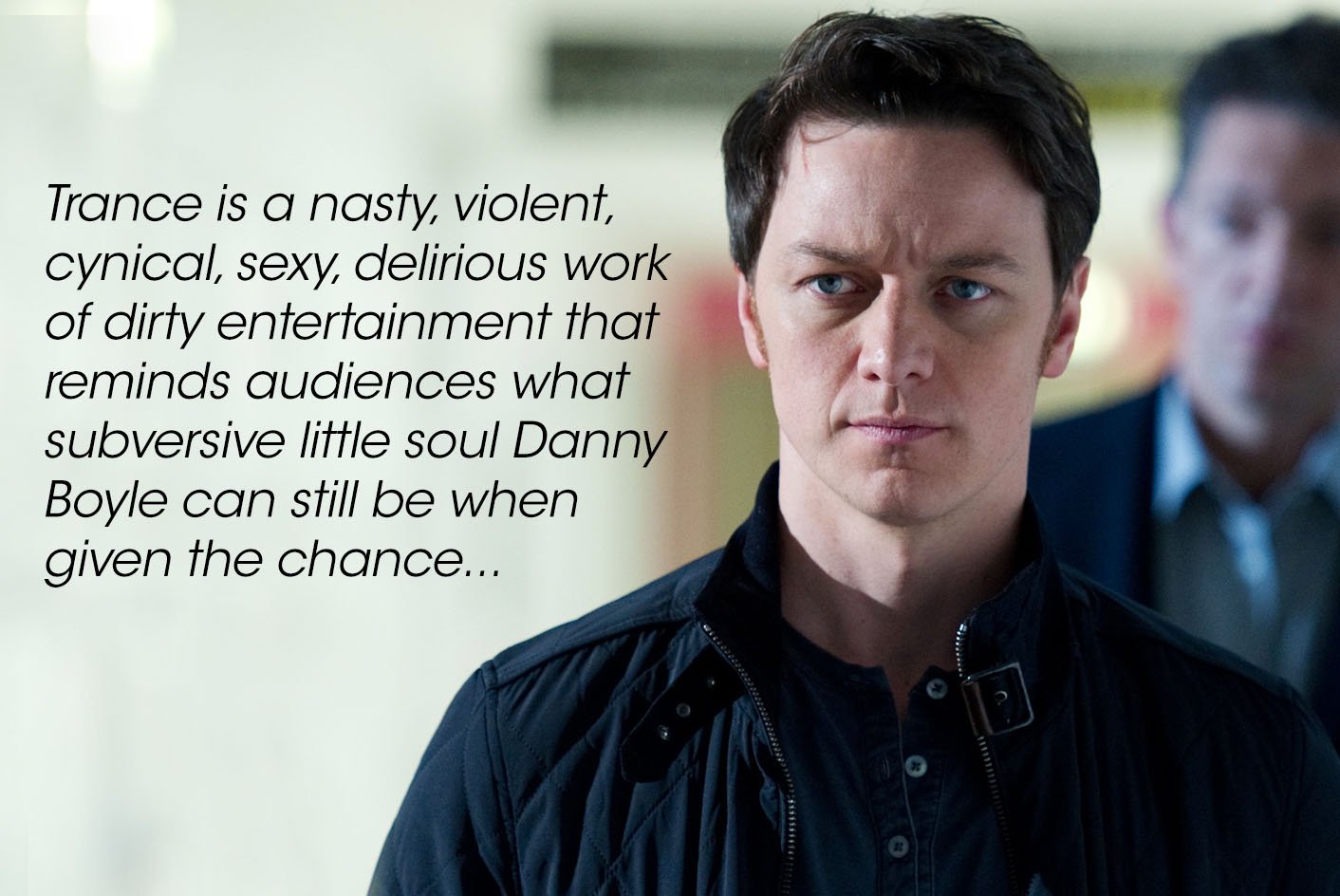 That’s where things start to get mighty strange in Trance and considering it only takes about 15-20 minutes to get to that point in the story, it means audiences are in for a wild ride. Boyle’s film is a headtrip that mixes trippy visuals with film noir/classic thriller conceits. It’s like Inception with hypnosis instead of dreams and with Boyle at the helm instead of Christopher Nolan, it’s also far more colorful, dirty, and delightfully R-rated. In Trance, Boyle has crafted loopy goofball fun for grownups and thank god for that. The film reunites the director with screenwriter John Hodge who cranked out the scripts for Boyle’s first films Shallow Grave, Trainspotting, and A Life Less Ordinary. The former doctor Hodge has a gallows sense of dark humor and a cynical worldview that combines rather brilliantly with Boyle’s relentless energy and exuberance. Hodge writes a-holes who the audience should hate, while Boyle creates fast paced colorful films easy to love. Together they creates a strange combination: cynical crowd pleasers. Trance feels very much like their early collaborations. It’s a strange pulpy thriller packed with violence and action, yet with just viewed by someone possessing a twisted sense of humor it’s also perversely hilarious. As the twists and turns pile up the movie becomes as insane as it’s protagonists and goes completely off the rails. However, it goes off the rails in such a wonderfully absurd way that you just have to sit back and smile at the weird world Boyle and Hodge created. It certainly doesn’t hurt that Boyle’s superstar directing stature brought in three perfect actors working in a silly B-movie that should be below their pay grade. McAvoy is an endearingly charming not-so-innocent victim, Rosario Dawson pulls together what appears to be an ice cold femme fatale before transforming into something else, while Cassel turns what could have been a one-note villain into an endeering sleazeball.

I know I’m being vague with all this, but that’s just because merely describing the lunatic plot would have me writing in confused circles and Trance is really the type of movie that should be experienced blindly so that each ridiculous twist can play out unexpectedly with your jaw repeatedly hitting the floor accordingly. It’s a film that Boyle clearly made to amuse himself by executing all of his silliest and darkest impulses as a mental break from the nationalistic optimism of the Olympics. The movie frequently goes too far in it’s hyper-kinetic style, dark comedy, overt sexuality, and violence in a way that will alienate many viewers. However, if you’re a genre fan on Boyle’s particular wavelength, it’s those excesses that are the film’s pleasures. Trance is definitely a minor move for the director and everyone else involved for that matter. Thankfully the joy they took from being bad translates to the audiences and if you’ve missed the nasty side in Boyle in his recent award-winning flicks, it’s a chance to see it all those lost qualities explode onto the screen like a cherry bomb dropped into a septic tank. This is genre sleaze with A-level talent and production values and that special combination doesn’t come along every day anymore. A silly little trifle to be cherished.

Thankfully the joy they took from being bad translates to the audiences and if you’ve missed the nasty side in Boyle in his recent award-winning flicks, it’s a chance to see it all those lost qualities explode onto the screen like a cherry bomb dropped into a septic tank. This is genre sleaze with A-level talent and production values and that special combination doesn’t come along every day anymore. A silly little trifle to be cherished.
REVIEW SCORE
7
File Under: Action, Comedy, Film, Thriller, Violence