A Mind-Bending Message of Hope 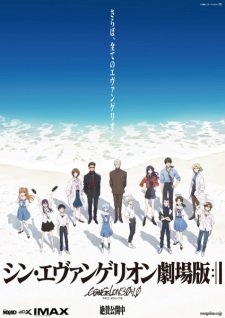 Over the years, Evangelion has managed to capture the hearts and minds of countless people across the globe. It has timeless characters, mind-boggling concepts and some of the best giant robot fights ever captured in the anime medium. The Rebuild of Evangelion film series tried to retell the series in a new way, and with four films. After almost fourteen years, it has come to an end and Evangelion: 3.0+1.0 gives the series the complex and hopeful sendoff the franchise deserves.

For anyone not in the know of the lore of Evangelion, the franchise follows Shinji Ikari, a teenager who faces a string of childhood trauma, including his mother dying in a mysterious way. His father, Gendo, manages to be the anime equivalent of the worst dad in history, calling on his son only when he is needed. This is where the series picks up—when Shinji finds himself tasked with piloting a giant robot to fight and kill angels that threaten the very existence of humanity.

If this sounds complex—it is—and series creator Anno Hideaki does not stop there. What starts off as a deep dive into the minds of traumatized children with the weight of the world on their shoulders only gets more convoluted. Rich in lore as details about humanity, reality and the soul all get drawn on in ever increasingly complex and interesting ways.

“Evangelion: 3.0+1.0 is the longest and at times the most lore-filled of the entire Rebuild saga.”

This being the fourth, and final film in the series, Evangelion: 3.0+1.0 is the longest and at times the most lore-filled of the entire Rebuild saga. It answers countless questions fans have had over the course of both the original series and these new films. It gives send-offs to characters who have long been lost to the crushing grips of the harsh world our heroes find themselves in, and it finally gives a proper ending which has felt missing for much of the franchise’s history.

Evangelion: 3.0+1.0 picks up where the last film left off, the world is in ruin, and Shinji—along with all the rest of the ragtag group of characters we have met over the course of the previous three movies—are ready to face their final battle. What follows is a mix of action and an odd day-to-day slice of life, as the film is set into two major segments; the first giving the audience a taste of how the last reminisce of humanity are struggling to survive and build a future, with the second half acting as the battle to make this hope-filled future a reality.

All the major characters from the franchise make an appearance and are given moments that show how they have grown. Each has finally found a version of peace, from Rei Ayanami, Misato Katsuragi, Gendo Ikari, Asuka Langley Shikinami, and even the series hero Shinji Ikari. They find this only after combat involving battleship surfing, headless naked bodies wandering the countryside, and, of course, bombastic giant robot battles. The movie does not spare the action and insanity as we rush headfirst into its final moments.

Giving a solid mix of complex character development and action fans have come to love in the series, Evangelion: 3.0+1.0 feels like the perfect send off to a beloved old friend. This is a film series that Anno Hideaki has put countless hours into crafting, and the end result is stunning, confusing and mesmerizing. If you have been waiting to give the Rebuild of Evangelion series a watch, now is your chance. Evangelion: 3.0+1.0 is a wild ride, but one not to be missed.

Anno Hideaki finally concludes the Rebuild of Evangelion film series in an ambitious and exciting exploration of suffering, struggle and trauma that finally puts an end to this beloved series.
REVIEW SCORE
9
File Under: Anime