A Redefinition of Religious Horror
SCORE: 8/10 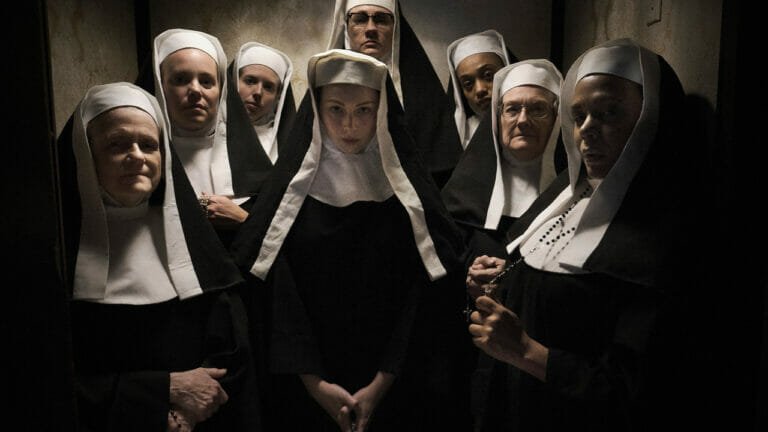 Religious horror, or horror about demons and exorcisms, comes in many shapes and forms. More often, stories lean on The Exorcist, tales of demon infested people creating horror for the ordained who try to rip them out. It’s been extrapolated upon through franchises like The Conjuring and twisted in movies like The Vigil. Mickey Reece, the creator whose name fluttered around genre circles after his last feature, Climate of the Hunter, does something completely different with Agnes. What starts as a playful take on the exorcism movie blossoms into a grounded tale about a woman abandoned by her own faith. This horror comedy sneaks up on you will crackling wit laid atop horrific scenes in a convent, then slaps you with some reality once your guard is down.

The women of the Saint Theresa convent live an otherwise quiet existence. They’re isolated, living a life of chastity and solitude, strung together by the rules of their Mother Superior (Mary Buss). When sister Agnes (Hayley McFarland, herself of The Conjuring) falls ill, it’s assumed she must be possessed by a demon, so the sisters look to the church for help. Father Donaghue (Ben Hall) doesn’t have the best reputation, slated to be dumped overseas for accusations of indiscretions. When the diocese comes knocking, he’ll take his young protégé, Benjamin (Jake Horowitz) to visit the convent and evoke the rite of the exorcist. To Donaghue, demons aren’t real, but he believes exorcisms to be healing as he acknowledges a person’s faith as a way to heal. The pair visits the convent and has their belief in demons tested, and they end up testing the faith of the sisters themselves, mostly sister Mary (Molly C. Quinn). Mary has a special relationship with Agnes, and her illness convinces Mary that maybe the convent isn’t where she wants to live through her end of days.

There are a few layers to this delicious cake of a feature, each worthy of attention. First, its overall sensibilities are a riot. The dry wit and casual speech not usually associated with members of the clergy in horror features gives the first half a distinct Armando Iannucci (Veep, The Death of Stalin) vibe. It’s riotous and had me gasping at a nun replying, “oh stop!” to a thin compliment. Buried within the silly and sparkly first half are conversations about faith and what it means now, like the grounded reality of the effectiveness of exorcisms. All that laid atop spooky uses of the word “WHORE,” and a pretty stripped-down scene of the rite being performed.

But if you had fun in the first half, you’ll be smacked by the second, which abruptly changes tone and focus to tell a tale of Mary who leaves the convent. Now, with no external support, the woman of faith navigates life alone with no money and a magnetic pull to Agnes’ pre-convent-life. She chases the man Agnes lost while trying to stay afloat as a cashier in a ruthless town that would sooner chew her up than welcome her, and would sooner objectify her former-nun status than revere her. Everything matters in this element of the film, and it’s held up by the subtle acting of the supporting cast like Sean Gunn and Chris Sullivan. Every character is portrayed as a varying level of a threat to Mary. It’s hard to call a comedy about exorcism filled with blood and cursing “restrained,” but Reece is restrained in what he dumps Mary into. It’s not so much what happens to her as what might happen to her, which is all we need to engage with Mary stumbling across her path.

“Agnes is a hilarious spin on the religious horror genre that had me grabbing my chest laughing, then glancing side to side wondering if I was allowed to laugh.”

There are a couple of clunky moments like how the father’s “accusations” are brushed off and treated with levity. The middle is a bit of a slog that stops the flick in its tracks just briefly, but it pays off for the themes that had been hiding until that point. For every argument that its imperfect in its execution, you could reply that those elements are what make it a successful twist on the familiar.

Reece’s visual and physical style are really fun, each tableau playing with blocking to evoke laughter in scenes that might otherwise evoke fear. The feature is a blend of mismatched tones that somehow come together in a gorgeous shade of red.

Agnes is a hilarious spin on the religious horror genre that had me grabbing my chest laughing, then glancing side to side wondering if I was allowed to laugh. Then it surprised me by morphing into a subtle tale about a woman left on her own that has well crafted sensibilities that never feel frustrating. That’s what Agnes is: surprising. I didn’t expect to call a romp about horned up nuns and a leather suit clad exorcist “beautiful” but here we are.

Mickey Reece’s version of religious horror isn’t anything familiar. It sneaks up on you with crackling wit then flips itself to a subtle tale about womanhood, faith, and isolation. 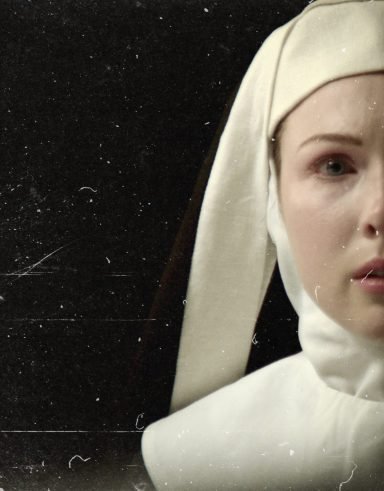