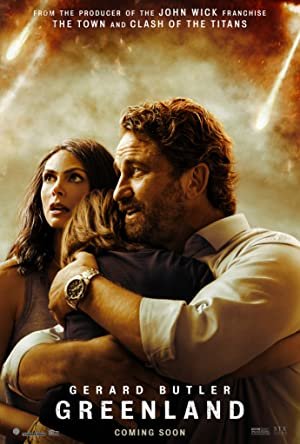 Greenland imagines a world facing down a hell storm from outer space. Then, it stuffs in one of the warmest and most reliable action stars and a positive view on humanity. What comes out the other end is a paint-by-numbers disaster film with strong enough performances and action to do the job it set out to, but nothing more and nothing less.

John (Gerard Butler) has just been welcomed back home by his wife, Allison (Morena Baccarin) and son, Nathan (Roger Dayle Floyd). While planning a sort of “welcome back” barbeque with the neighbours, John receives a mysterious phone call from the Department of Homeland Security. The call lets him know he’s been selected for survival, as a comet, Clarke, comes crashing towards the earth. Realizing this means the comet they’d all been told was meant to be a non-threatening spectacle is actually going to create an “extinction level event,” the family takes to the road to find the shelter promised to them. Not knowing the rules of the shelter plan, they accidentally expose Nathan’s disqualifying trait, his diabetes. This sets off a string of events where the family is split up in their desperate attempts to find safety as the world crumbles into a panic.

Director Ric Roman Waugh is paired back up with Butler with whom he worked on Angles Has Fallen. It’s interesting to see the two take on the “B” disaster movies shortly after taking on the similarly styled ‘protect the president’ feature. It’s a tall order to make these films as the world exists now, and Waugh’s features do well to sidestep reality to deliver escapism. Waugh’s reverence for servicepeople and the government are on display with the members of the military and rescue teams portrayed as selfless and heroic in the face of their certain demise.

It’s a bit difficult to ignore the fact that this movie showcases the end of the known world at a time where society is barely hanging on to normalcy during a pandemic. There are moments where John, who has Butler’s real life Scottish accent, is questioned about his entitlement to American protection as an immigrant. There is the massive moment where Nathan is disqualified from the shelter due to his pre-existing condition. While there’s temptation to engage with these incidences, it’s easier to approach this with an air of “it’s not that deep.” Sure, you could quip that the government was not at all prepared to the pandemic we’re all currently suffering through, let alone a world ending event, but you’d be best off suspending your disbelief and enjoying the character driven twist on the disaster movie.

It’s character driven either by design or by necessity. Working with a small budget, Greenland had to make a massive feature with not very much spectacle. It successfully peppers in just enough action that the budget doesn’t feel spread super thinly and each action sequence is stunning. In what is either a remedy to the lack of action, or an intentional change, is that time is spent with each character. With John and Allison getting split up, equal time is spent with each of them as they try to manage the planet being set ablaze and hoping to be reunited. There’s enough time for both of them to meet all of the disaster movie cliches without it feeling tired since we get to witness their different approaches to the situations.

Greenland isn’t going to do anything to make you want to call your friends to analyze it, but that’s the point. By-the-book action movies are meant to be escapism, and not every one of them needs to rely on large budget portrayals of natural disasters to make the audience care about families reuniting before the world ends. Greenland knows this and strips down films like The Day After Tomorrow and War of the Worlds to give us a new, whether or not its fresh, popcorn flick that begs you to turn your brain off.

There’s not much to this otherwise paint-by-numbers disaster movie, and that’s why it works. It utilizes the budget and stars creatively to create a new take, one that isn’t necessarily fresh. It’s best approached through the simple lens of escapism, imagining a world only under vulnerable to fireball from space.
REVIEW SCORE
7
File Under: