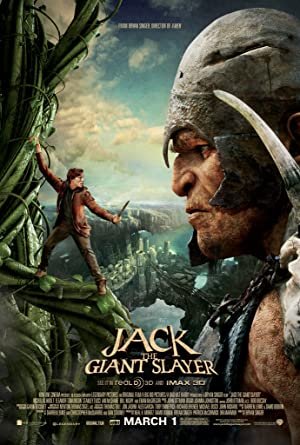 Remember when you were a kid and first heard the story of Jack And The Beanstalk?

Didn’t it instantly make you wish that you could see a version of the story with a massive CGI battle and a pointless conspiracy plot? No? Oh, that’s too bad because Bryan Singer and a team of screenwriters talked Warner Brothers into dropping a few hundred million dollars into making that dream a reality. Whoops! Why we’ve been treated to no less than three separate souped up fantasy versions of fairy tales in less than a year is a mystery to me. My guess is that someone decided it would be an easy way of tapping into that Lord Of The Rings audience while also attracting small children who don’t know any better. Then several studios got into a battle to see who could make their version first. Now Jack The Giant Slayer, Snow White And The Huntsman, and Hansel & Gretel: Witch Hunters all exist and audiences are worse off for it. This latest steaming pile of magic beans just might be the worst of the lot and that’s really saying something. Hopefully it will be a bomb and end the trend as quickly as it started. That sure would be nice anyways. Otherwise, we might have to sit through a movie with Arnold Schwarzenegger as a cigar-chomping, machine gun blasting Humpty Dumpty soon. Actually now that I think about it, that one wouldn’t be all that bad. Jack The Giant Slayer sure is that bad though…sigh.

The film opens with a mythological prologue with CGI about on par with an early PS2 cut scene, if that. It doesn’t make much sense, but essentially sets ups a backstory revealing that a world of giants lives above the clouds that was once connected with the human world. There were many wars, but now the worlds are separate and mercifully at peace. For some reason, magic beans are involved and end up in the hands of the peasant boy Jack (Nicholas Hoult) following a medieval monk heist (nope, not joking). He soon meets the kingdom’s princess (Eleanor Tomlinson) who likes the adventure-craving boy, but their rainy courtship is interrupted once Jack spills his beans and a giant beanstalk carries the girl up to the land of the giants along with his house. Soon the frightened king (Ian McShane) dispatches his best men (Ewan McGregor and Eddie Marsan) and Jack to climb the beanstalk and save her. The only catch is that the king’s advisor (Stanley Tucci) goes along with him and that jerk is not only aware of the giant world but plans to use an ancient crown to take control of the giants and take over the world. Cue a massive giants vs. human battle and an evil plot that might have worked if it weren’t for that pesky kid.

Hopefully Jack The Giant Slayer will be a bomb and end the fairy tale blockbuster trend as quickly as it startedFirst the good news, large chunks of the film are surprisingly watchable. Unlike the previous fairy tale blockbusters, this project actually landed in the hands of a decent director in Bryan Singer (The Usual Suspects, X-Men 1 and 2) and while this is faaaaaaaar from his best work, his involvement did at least attract a decent cast to the project. If you’re going to cast a wide-eyed innocent these days it may as well be Nicholas Hoult who just gave zombies a heart in Warm Bodies and his chemistry with Tomlinson sells their ridiculous love story. However, the real talents are around the edges. Tucci can chew scenery with the best of them and clearly has a ball being a figure of gap-toothed evil with his equally entertaining sidekick Ewen Bremner (aka Spud from Trainspotting). On the good guy side, McShane brings his usual wit to the role of a hilariously overdressed king while McGregor and Marsan play their knightly superheroes with their tongues delightfully planted in their cheeks. Yep, the performances are fairly fun across the board. It’s just a shame that this type of movie isn’t exactly dependent on characters to thrive. After all, these guys still have to spit out pages of mythological gobbledygook to advance the narrative and even actors of this caliber can look stupid when forced to say and do stupid things.

Of course, the biggest reason for the film’s failure are the giants themselves. There’s not a moment when the giants (either the leaders or battle drones) look like anything other than big dumb cartoons. Now, I suppose that will help sell the movie to the kiddies out there, but it also guarantees the film is devoid of any sense of threat or danger. Considering the fact the movie has “giant slayer” right in the title, that’s a bit of a problem. Singer knows his way around crafting action scenes entirely on a computer, so he gets the scale right and creates scenes that should in theory be exciting. The trouble is that the giants are never frightening or memorable, so by the time the climatic battle comes it just ends up feeling like a whole lot of smoke and noise without much actual visceral impact. As is becoming increasingly clear, these types of stories just weren’t meant to be stretched out and adapted into epic action movies. They are simple children’s fables and all the added scale and violence serves to do is suck out all the innocent fun and replace it with brooding drama that’s completely out of place. I suppose the movie might work for kids because they do enjoy monsters, but for someone who watches and enjoys classic fantasy movies the only possible reaction is disappointment.

Back when folks like Ray Harryhausen (Jason And The Argonauts) were in charge of the genre, the movies may have been cheap and cheesy, but at least they had charm, character, and memorable monsters. Now that B-movies have become A-movies, all those secret ingredients have been pushed aside in favor of casting bigger stars and buying more special effects. It might make the movies glossier, but it sure isn’t making them any better. There’s no imaginative charm to a movie like Jack The Giant Slayer, it’s just a big expensive factory product with no reason to exist other than to pad the pockets of everyone involved. Let’s hope that this one isn’t successful and discourages the cynical folks who sucked the fun out of Jack And The Beanstalk from spoiling any more bedtime stories.

Hopefully Jack The Giant Slayer will be a bomb and end the fairy tale blockbuster trend as quickly as it startedFirst the good news, large chunks of the film are surprisingly watchable.
REVIEW SCORE
4
File Under: Blockbuster, fairy tale