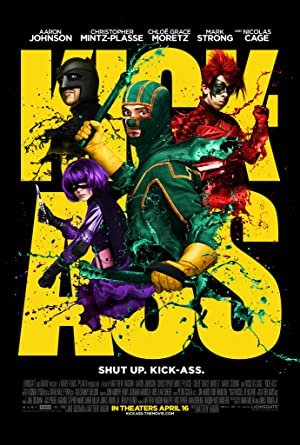 Kick Ass might not be the most notable comic book-turned-action movie of the past few years, but it just might be the most irrepressible quiet guy-turned-superhero movie to ever splatter itself against the silver screen.

Arriving in theaters with very relatively little fanfare, outside of the mouth-breathing geek community, Kick Ass delivers on its prescient title. For filmgoers who have a fondness for fast-paced fisticuffs that laugh their way towards lovingly ludicrous conclusions, then this movie promises not to disappoint. After all, it’s not every day that a movie features a preteen girl who drops the c-bomb before graphically dismembering a room full of drug dealers.

Based on the cult comic by Mark Millar, the film provides a twist on the traditional superhero mythology. We’re introduced to a lonely high school loser, Dave Lizewski (Aaron Johnson), who spends the opening minutes wondering why no one has ever tried to be a costumed vigilante in real life.

He soon learns a valuable life lesson—the simple act of wearing spandex and carrying a stick does not stop a gang of thugs from hospitalizing you.

Some metal plated bones, and a couple of damaged nerve endings later, Dave emerges from his painful road to recovery with a virtually limitless pain threshold. So Dave does what any self-respecting self-destructive teenager would do—he adopts a pseudonym and drops himself in the middle of the action.

Alright, so he can’t fight any better than before. But what he can do is take a beating. His entire plan is to essentially let his opponent punch themselves in submission. This goes on for a little while until some bystander uploads cell phone video of one of Dave’s “victories”, and he becomes an internet sensation. Soon his image is spun off into comic books and his reputation is spun on by eager reporters.

All of a sudden, Kick-Ass becomes a notable name.

But as all famous costumed vigilantes do, Kick-Ass eventually finds himself targeted by a local crime boss who believes that heroes are bad for business. Fortunately, Kick-Ass is not alone in the crime-fighting department. Other heroes begin to emerge on the scene. Take for instance the scorned policeman who dresses up as Big Daddy (Nicholas Cage) and his assassin-slash-preteen daughter, Hit Girl (Chloë Grace Moretz).

With a cast of characters in place, Kick-Ass shifts into overdrive, delivering thrills to top most superhero fare, while mocking the genre with a collection of would-be heroes driven to fight crime through a combination of sheer insanity and hilarious delusion.

Far from his brooding Young Lennon role in the forthcoming biopic Nowhere Boy, Johnson scores big laughs, bigger thrills, and confirms his status as one of the most promising actors around. Meanwhile, Cage, who is fresh off a string of regrettable movies, delivers an oddly touching performance as the protective paternal figure of Big Daddy. But truth be told, the film is stolen by Moretz and her potty-mouthed portrayal of a pint-sized assassin. It’s an instantly iconic role that is sure to inspire sequels, if the film is successful.

By the way, the film is going to be successful.

Truth be told, the film is stolen by Moretz and her potty-mouthed portrayal of a pint-sized assassin. It’s an instantly iconic role that is sure to inspire sequels, if the film is successful.
REVIEW SCORE
8
File Under: