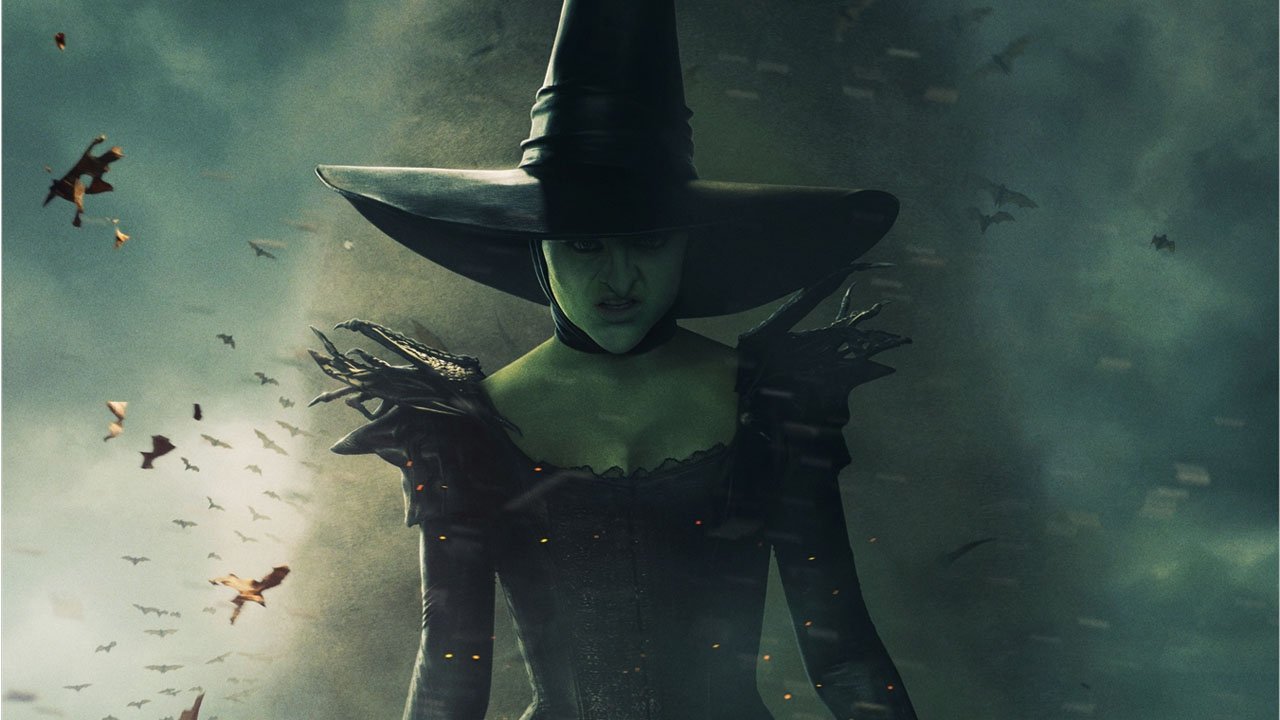 It had to happen one day. As sacrosanct as The Wizard Of Oz is to children and movie lovers everywhere, we live in the era of the blockbuster franchise.

The Oz brand is simply too big to be ignored and someone was going to crack it. On paper, it at least sounded like Oz The Great And Powerful might be treated with respect. The cast featured stars like James Franco, Michelle Williams, and Rachel Weisz, while directing duties were assigned to Sam Raimi who has proven to have a way with special effects and relentless lighthearted entertainment for decades (including helming the Evil Dead series and the first round of Spider-man movies for those keeping score at home). Everyone involved clearly wanted to honor Oz and with plenty of untapped L. Frank Baum books still left to adapt, it seemed like a blockbuster franchise kickstarter that might actually honor the source material. Sigh…this is what believing in something irrationally will get you. Oz The Great And Powerful isn’t a complete disaster, it’s just the dry n’ dull commercial product that we all should have expected. It’s got nothing on the iconic original and can’t even live up to the weirdo charms of Disney’s culty 1985 semi-sequel Return To Oz. Kids will probably enjoy it for the bubblegum fun, but we all should have been able to expect more than that from a return to such an iconic world.

So, a dazed James Franco (is there any other kind of James Franco?) stars as conman/magician Oscar Diggs. He opens the film touring Kansas with a cheap magic show in a traveling circus under the name Oz. We see him abuse his assistant (Zach Braff) and lose his girl (Michelle Williams) before a tornado comes along to sweep him off to the land of Oz. Once there, he’s greeted by a witch nemed Theodora (Mila Kunis) who mistakes him for a great wizard prophesized by a former king to fall from the sky and save the land of Oz. She takes him to the Emerald City to meet her sister Evanora (Rachael Weisz) who further explains that all the riches of the kingdom could be his if he kills an evil witch. They then send him off to take out this “evil” witch named Glinda (Williams, again). Now, if you remember the original movie or books enough to know the witches’ names, you can probably guess there’s some trickery going on. Regardless, Franco sets out on his quest and befriends a kindly flying monkey (Braff, again) as well as a living China doll girl (Joey King) along the way. The charlatan ends up inadvertently in a battle to save the land of Oz culminating in a surprise wicked witch, flying baboon battles, and of course a giant floating head of the wizard himself. Yep, it’s the action fantasy version of The Wizard Of Oz. The version no one ever wanted.

What’s most remarkable about the movie is that despite constant references and allusions to the 1939 classic, this new flick completely misses the tone and sense of warm, wild fantasy storytelling of the original. When the movie opens in black and white and square framed for Kansas sequence, you’ll smile gently remembering “hey, that’s how the old movie started!” However, aside from the luscious production design that recaptures old Hollywood magic, it feels nothing like The Wizard Of Oz. From the first moments on, there’s no depth or magic to the characters, no drive to the story, and very little in the way of humor that works. The script goes through the usual “hero’s journal” and “road trip adventure” story beats simply because that’s the easiest way to structure a fantasy movie. The messy plot is cobbled together from bits and pieces of Baum’s original novels, which is nice but they never really connect. You’ll guess who the wicked witch is instantly and only be disappointed when the classic green face villain arrives. You’ll notice jokes, but never laugh. You’ll see familiar settings, but never feel like you’re actually in an Oz movie. You’ll appreciate how expensive all the CGI must have been without ever actually being impressed by the cartoon effects. And most of all, you’ll marvel at how disinterested James Franco seems at all times. Sometimes when movies are made entirely in green screen fantasy zones, actors seem visibly lost (let’s call it “The Phantom Menace Effect”) and that’s true of everyone here. Kunis could not be more miscast and is visibly uncomfortable at all times. Williams can’t muster her acting talent to do anything with a one-note boringly beautiful princess role. James Franco seems as wooden and lost as he did hosting the Oscars. Zach Braff seems to forget what a joke even is. Only Rachel Weisz offers a decent screen presence, but even she’s wasted on a screenplay overstuffed with characters and events that lacks cohesion and ideas. 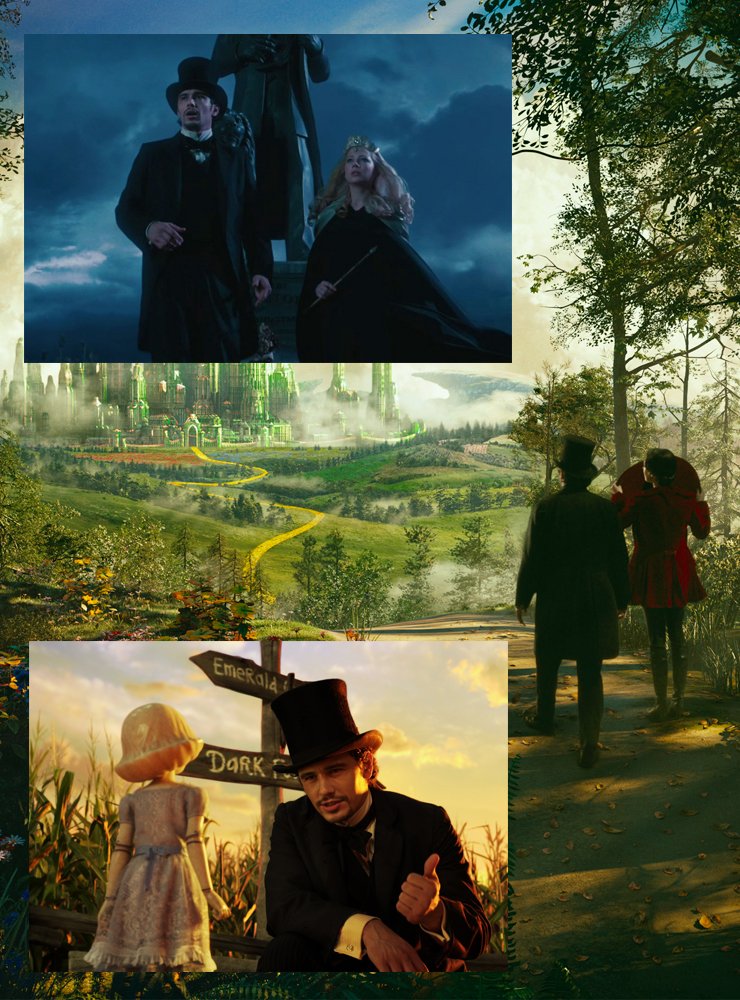 It’s hard to blame anyone in particular for the movie’s failure. It’s clear while watching it that the script was constructed on the fly from the flimsiest of prequel conceits and never gels. I suppose Sam Raimi should have been in charge of pulling the mess together, but much like his mangled Spider-man 3, it’s clear he didn’t have much control over the runaway production and simply tried his best to meet his deadlines. He provides some of his usual visual flair in a few key sequences like the tornado journey to Oz or the wicked witch origin scene. He also provides some spectacular 3D as his deliberately and gimmicky “more-is-more” visual aesthetic is suited to thrusting objects in the audiences’ face. He even has adds few funny in-jokes (like Franco stopping the munchkins mid-verse when they try to turn the movie into a musical) and smacks old buddy Bruce Campbell around in a cameo. However, the movie never feels like Sam Raimi’s. Aside from a few flourishes, it’s about as impersonal as big blockbusters get. Clearly Raimi’s childhood love of Spider-man and his deep understanding of that comic book world allowed him to smuggle personality onto his first two behemoth Spidey blockbusters. Here, he’s clearly running damage control trying to hold a leaky script together with little room for iconic Raimi touches. It’s a real shame because the glorious cheese of Drag Me To Hell proved that the director could still deliver the goods. That was a small production with minimal studio interference though. Clearly the notorious nice guy Raimi isn’t suited to battle studio executives for control over tentpole productions. Hopefully he’ll lick his wounds and return to small offbeat projects in the future.

In the end, you can’t get too worked up about the failure of Oz The Great And Powerful. The movie is exactly what Disney wants it to be: big, glossy, warmhearted, derivative of their massive 3D hit Alice In Wonderland, and filled with bling-bling merchandising opportunities.” Kids will certainly have fun because the 3D spectacle functions more like a 2-hour amusement park ride than a work of storytelling. The trouble is that with material this iconic as well as a cast and director this talented, there was an opportunity to make a creative blockbuster Oz update that did things studios couldn’t pull off with 1939 technology while paying homage/respect to the original for all the grownups in the audience. That was expecting too much. The folks behind this production clearly saw it as a cashcow and not an opportunity to revive Hollywood history. Inevitably, the flick will make all the money Disney craves and then quickly disappear into obscurity aside from the occasional lunchbox or kiddie Halloween costume (just like Burton’s woefully disappointing Alice In Wonderland, the obvious model for this flick). You can only be disappointed in yourself for expecting more. For the type of commercial money-grabber it is, I suppose Oz The Great And Powerful works just fine. It just should have been much more than perfunctory. Ah well, let’s just hope Sam Raimi realizes it’s time to abandon blockbusters after the whitewashing of Oz and the disastrous tampering of Spider-man 3. He’s still got a few movies left to make in his career and it would be a tragedy for movie geeks and Evil Dead-heads everywhere if he wasted them on more dull blockbusters that any director with half of his talent could have made just as well.

The Oz brand is simply too big to be ignored and someone was going to crack it. On paper, it at least sounded like Oz The Great And Powerful might be treated with respect. 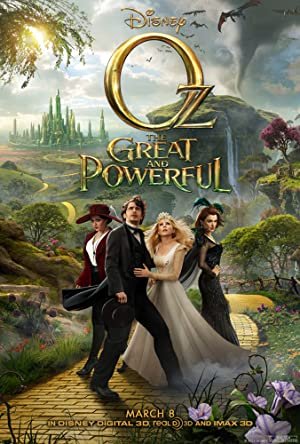