So Many Good Pups 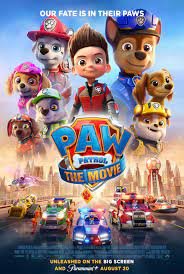 Children’s movies come in all kinds; there are the big budget Disney features, some that head straight to streaming, and even the ones that feel like a glorified 90-minute advertisement. Paw Patrol: The Movie can compete with the best of them.

I’ve been subjected to countless hours of Paw Patrol on TV, and there is always a feel-good story in every episode. This movie is no different, with the pups teaming up to stop the evil Mayor Humdinger (Ron Pardo), a cat lover, from ruining Adventure City. All our kids’ favourite characters are still there, and some big names have joined the cast like Dax Shepard, Jimmy Kimmel, and yes, even Kim Kardashian.

As a 30-something year-old woman, and a mother of two, I fully expected to sit down to this review from a “family” perspective. That is usually my go-to with franchises geared toward small children. As a parent, you’re stuck watching things that you’d rather not, for the sake of the kids. In this case, I can say wholeheartedly that I genuinely enjoyed the movie.

“Paw Patrol did something I didn’t expect with this movie.”

What Paw Patrol: The Movie added to the usual kid movie mix, however, was action-packed animation. Buildings came down, people were trapped, explosions took place. It managed to keep my two and six-year-olds engaged and that is no small feat. On top of that, the script wasn’t filled with your basic, cheesy, parent-approved lines. Though the movie is completely family-friendly, even for the littlest ones, the characters occasionally invoked emotion from the adults in the room, even getting a chuckle or two from my partner.

Paw Patrol did something I didn’t expect with this movie. They introduced a brand-new character, Liberty (Marsai Martin)! Usually when new members of the cast are introduced in a movie, I’d expect them to jump in just for the film and disappear after. In Liberty’s case, she was made a full-fledged member of the Paw Patrol Squad, so I’m very curious to see if that carries on throughout the show too.

This animated feature took me by surprise with just how much they improved the design. Ryder looks like a whole new person and even the pups have seen a huge upgrade. The Paw Patrol pups don’t look like they were just thrown together like some other brands geared toward children. It was nice to see the effort behind the film. Even the soundtrack was something that parents could get behind while still staying family-friendly. It wasn’t childish, and the vocals were done by Maroon 5’s Adam Levine, leaving something for the parents to recognize and enjoy.

Paw Patrol: The Movie managed to keep up with some of the better animated films, especially when being marketed toward small children. I rarely see my kids sit still, but watching all their favourite pups with improved graphics and real action had them both glued to the screen. The film brings something to the table for everyone in the family, and not just “for a kids’ movie”.

Paw Patrol: The Movie isn’t your average just-for-the-kids movie. It brings humour, action and heart to the table for everyone in the family to enjoy.
REVIEW SCORE
8
File Under: