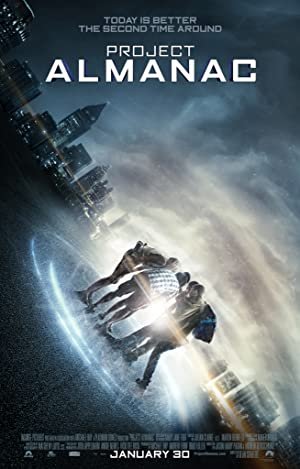 Oh time travel, you are a fickle beast aren’t you? Whether it’s Homer Simpson with a toaster, Marty McFly with a rad skateboard, the Loopers with their looping, or whatever the hell was supposed to be happening in Primer, things never quite go as planned now do they? You see there are paradoxes and temporal displacement and many other problems that just tend to be out of your average time traveler’s grasp. It always seems like a good idea at the time though doesn’t it? Especially if you’re a bunch of rowdy teens hoping for good time. Oh hey! Look, it’s Project Almanac. A movie about a bunch of teens who discover time travel while filming their adventures on camcorders. Yep, it’s the inevitable time travel found footage movie that we all should have guessed was coming. It’s ok too. Not great. Not horrible. Just ok.

The film stars Jonny Weston as one of those teens who only exist in movies that seems to be a social reject from their entire high school community purely because they wear glasses. Weston plays a science wiz who creates impressive inventions in the hopes of landing a MIT scholarship. He gets one, but not it’s not enough for his out-of-work mother to afford. So he does what any teen genius would do in this scenario and hunts around in his former super-scientist father’s abandoned attic hoping to find a new invention. Instead he and his sister (Ginny Gardner, always filming everything for the sake of the found footage conceit) find an old video camera with a tape of one of Weston’s childhood birthdays. While combing through the tape, Weston finds footage of his teenage self in the background. He’s confused, but obsessed. Eventually he and his wise-cracking genius friends (Allen Evangelista and Sam Lerner) stop obsessing over the prettiest girl in school girl (Sofia Black-D’Elia, whose character is limited to being pretty and appealing) long enough to dig around in Weston’s basement and find hidden plans and parts for a time machine that Weston’s father was designing before he died. So they do what anyone would do in that situation, finish the time machine with car batteries and Xbox parts and go on an adventure. Nothing could possibly go wrong, right?

Project Almanac was clearly conceived around the one sentence pitch, “Chronicle, but with time travel.” That’s exactly what the movie is and exactly how it plays. Granted, Chronicle was a pretty great and creative flick, so it was inevitable that knock offs would follow. The trouble is that the found footage shtick has grown past a trend and into a genre now, so this movie feels very generic. We all know the routine. A bunch of teens have semi-realistic bonding through jump cut footage for a while. Then they discover a supernatural element belonging to a specific style of genre movie. Then they talk about filming it for a while and then whatever clichés of the chosen genre take over from the found footage clichés. It’s how low-budget Hollywood B-movies are apparently required to be made these days. Even if the concept of characters filming every single one of their actions is feeling more and more realistic all the time, the movies are getting tedious.

Admittedly, Project Almanac is far from all bad. First time director Dean Israelite shows considerable promise as a filmmaker. He’s got a knack with low-fi spectacle and working with actors. The three guys at the center all give naturalistic performances with impressive chemistry, just enough to make you buy into the world. The homespun inventions are amusingly conceived and just credible enough to get away with the silly pseudo-science. Then once all the rambling set up is finally in place, the film offers a hefty amount of fun for a while. Playing off of teenage wish fulfillment fantasies and Groundhog Day “repetition makes perfect” comedy, the second act of the movie is a bit of a riot. It’s a spin of teen comedy tropes with just enough gentle science fiction to work as genre as well. The effects are charmingly low-fi and the tonal gearshifts keep things unpredictable. For a while, you’ll start to think that Israelite and the gang might pull this thing off and then the wheels come off.

Inevitably, Project Almanac turns into one of those butterfly effect tales of the perils of time travel. It’s clear that’s where things are heading from the moment that the protagonist pops up on his old birthday video. For a while it works, sliding the movie gently from goof off fun into suspenseful fun. Then it all falls apart while speeding towards the finish line. Plot holes and logic gaps pile on top of each other at a feverish pace and the last 10-15 minutes has to be the least believably filmed section in any found footage movie ever made. It’s really a shame because Israelite and co. build up quite a bit of good will and charm dragging their Chronicle time-travel along for two hours before they lose the thread. Ah well, all things considered, it’s not a bad movie. At least a studio gave young and inexperienced filmmakers a chance to make something creatively conventional. That’s something. Now the next step is for Paramount to keep their Paranormal Activity-inspired micro-budget blockbuster wing alive without forcing every project into a found footage conceit that it doesn’t need. Project Almanac automatically would have been a better movie without being saddled with that baggage and hopefully someone at the studio noticed.