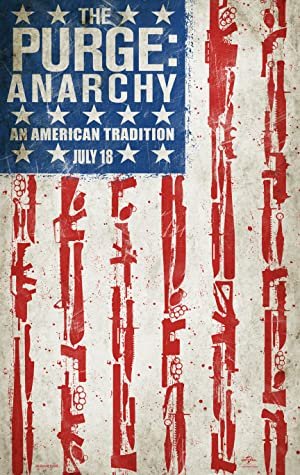 The Purge was a surprise hit last summer thanks to a pretty ingenious (in a gloriously stupid way) central concept. Unfortunately, the movie failed to actually show the promised night of anarchy known as the purge, instead merely delivering a mediocre home invasion movie anchored by Ethan Hawke being Ethan Hawke. This rushed-to-release sequel rights the original film’s most egregious wrong by at least actually setting a story within the purge, but then manages to get absolutely everything that the first film got right completely wrong. Sure, the setting is terrifying, but the characters a little more than one-note potential corpses, so it’s impossible to care one way or another if they die. Ironically, this film that preaches an anti-violence message ad nauseam serves up heaping doses of violence as its only pleasure. It’s a mess, but you get to finally see the purge this time… so I guess that’s something.

For anyone who missed the first movie or the trailers for either movie, the purge is a night of government sanctioned anarchy in the US in which no laws apply. Somehow, letting the country cut loose for a 12 hours of glorious violence once a year has managed to lower crime and unemployment rates substantially, so it’s become a beloved institution. This movie obviously takes place on purge night, following a boring couple (Zach Gilford and Kiele Sanchez) and an equally boring mother/daughter duo (Carmen Ejogo and Zoe Soul) who end up trapped in the middle of the purge for reasons too stupid to mention here. Thankfully, they both end up protected by a kindly killing machine played by Frank Grillo. He dresses like the Punisher, acts like the Punisher, has a similar backstory to the Punisher, shares the Punisher’s perverse sense of justice, and drives Mad Max’s car. Grillo’s Marvel lawsuit baiting semi-Punisher is out for revenge on purge night, but sets that aside to save the four characters who are the protagonists for some reason. Plus Michael K. White appears in a few scenes as an anti-purge leader of a militant revolutionary group and it appears as though government agents kill citizens on purge night as well. Why, you ask? Well, to set up the next sequel silly! This is a franchise, don’t ya know!

So good news first: the purge is finally depicted in its bloodsoaked glory and delivers a handful of insane set pieces (especially those depicting how the wealthy celebrate the purge). The bad news is that everything else in the movie is either mediocre or garbage. None of the characters have much personality or reason for being and as a result none of the performances are particularly memorable. It’s impossible to care whether or not anyone lives, so you watch the movie secretly hoping they’ll all die. Then the movie makes you feel guilty for that bloodlust by preaching an anti-violence message that feels pretty antithetical to the violence-shilling movie that contains it. The script also boasts some of the worst dialogue of a mainstream film in recent memory. Yet it’s not even quotably bad, just dull and per functionary. The only thing the movie has to offer is its anarchistic violence and even that is nearly impossible to see through all the mindless shakycam cinematography and rapid-fire editing. In other words, the whole thing is a big stinky mess. It’s a shame that the concept wasn’t used for a videogame instead, because that seems like a medium more suited to depicting/critiquing the concept of The Purge. But that didn’t happen. It’s a movie franchise now and an increasingly crap one too.

More than anything else, the film feels rushed. No one expected The Purge to win it’s opening weekend last summer, so this sequel was shot-gunned into production to hit screens barely 13 months after the original. Writer/director James DeMonaco clearly had to scramble to make that happen, so all of the wafer-thin characters and tin-eared dialogue were probably first draft placeholders that he never got a chance to develop. That doesn’t excuse a movie this sloppy getting a prime summer opening weekend, but at least explains it. I suppose if you’re desperate to see the purge in action then the movie offers a certain level of satisfaction. However, if you’re looking for any of the other qualities that one traditionally associates with a good movie, it’s probably best to skip this flick entirely. There’s nothing here but empty violence and tedious rhetoric.

No one expected The Purge to win it’s opening weekend last summer, so this sequel was shot-gunned into production to hit screens barely 13 months after the original.
REVIEW SCORE
4
File Under: Michael Bay