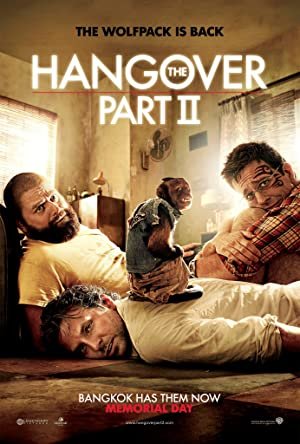 The Hangover Part II offers exactly what the title promises. It’s more of the same raunchy n’ dark comedy from the first movie and unfortunately that’s both a good and a bad thing. While director Todd Phillips (Road Trip, Old School) and his writers have taken advantage of the success of the original to push the boundaries of what’s acceptable in an R-rated comedy and create some of the most fucked up imagery ever scene in a movie released by a major studio, they are also slaves to the formula they created in the first movie. If you saw The Hangover you know the exact plot of The Hangover Part II and can probably work out the film’s mysteries before the painfully hungover protagonists. It takes the element of surprise away that made the first movie such a success and can definitely be irritating.  Fortunately there are still enough talented people involved for the movie to reach a laugh count that will satisfy anyone who buys a ticket, but there’s no danger of it becoming an instant comedy classic like the original.

The film opens with essentially a recap of the opening scene from the first movie. Bradley Cooper makes a phone call mere hours before a wedding is supposed to start to say that they’ve “done it again.” It’s the same scene from the first movie set in Thailand and that sets the tone for the rest of the movie. This time it’s Ed Helms’ dentist with a dark side who is marrying a beautiful woman (though not Heather Graham from the first movie, who’s barely mentioned). The wedding takes place in Thailand to appease the bride’s parents. They are uptight Asian stereotypes with an over-achieving 16-year-old son who disrespect Helms for being a dentist. He agrees to let his future broth-in-law join in on a quiet bachelor party, which ends up being not so quiet and the whole gang ends up awakening in a sleazy Thailand hotel the next day. The teen is missing, but they find his finger. Helms has a tattoo on his face rather than a missing tooth, the group find a monkey instead of a baby, and Galifianakis has his head shaved because it looks kind of funny. From there the remake continues with Ken Jeong’s psychotic naked gangster making a return and variations on scenes from the first movie playing out with increased shock value taking the place for new ideas or a fresh spin on the story.

It really is a shame how slavishly the writers followed the structure from the first Hangover (even to the extent that the missing groom from the last movie is inexplicably absent from the day after shinangins this time around, simply to keep the identical team in tact). I’m sure Warner Brothers’ mantra for the movie was “if it ain’t broke, don’t fix it.” I understand that philosophy, but the problem with comedy is that you can’t tell the same joke twice and have it be as funny. The first movie was such a widespread hit in part because it didn’t follow the cookie cutter comedy storytelling formula we’ve come to expect from studio comedies (it followed a cookie cutter detective story formula instead, which was just enough of a twist). This time everyone knows how the story is going to play out except for the characters and that’s a bit of a shame. The Thailand setting is different enough from Las Vegas to provide new set pieces, but it also leads to awkward stereotyping and can’t stop the inevitability of the plot.

Now, the predictable plotting might prevent The Hangover Part II from reaching the classic status of the first outing, but fortunately the movie is both funny and shocking enough to be a worthwhile experience. Phillips exploits the new setting for jokes about all the illicit vices that Bangkok is famous for (yes, even rather graphically depicting the ladyboys). It’s amazing the film didn’t get an NC-17 and good for the filmmakers for taking advantage of their success to push the limits of the MPAA. Thanks to this movie, Borat/Bruno, and the Jackass franchise, there’s barely a scene from John Waters’ infamous underground shock comedy Pink Flamingos that hasn’t now played in a studio comedy and I don’t think even Waters would have predicted that. The cast also recaptures the same chemistry and even if they don’t have much new to do, Galifianakis, Helms, Cooper, and Jeong are still an incredible comedy team and score some big belly-laughs that will make your bowels hurt. New cast members like Paul Giamatti can feel wasted at times, but with a core group of four performers that strong, you don’t really need anyone else. It also has to be said that Todd Phillips is one of the few comedy directors who actually has a sense of visual style. He’s not flashy enough for it to be distracting, but thanks to an increased budget there are some set pieces in the movie that actually feel like a summer blockbuster. That’s no easy feat in a character-driven comedy and something that Phillips rarely gets respect for.

So, is The Hangover Part II funny? Absolutely, it’s just also repetitive and the only reason I haven’t described any of the new jokes is because I don’t want to spoil the film’s few surprises. Thankfully, this isn’t Caddyshack II, it’s more like Ghostbusters II. Like that ghost-bustin’ sequel/remake it provides enough of what worked in the first movie to be satisfying without doing enough differently to really stand on its own. I guess that’s really all that could be expected given that the first movie didn’t exactly leave doors open for a sequel and this movie exists purely as a moneymaking property. It will get a shit-kicking from the critical community, but that’s mostly because the first movie was over-praised and critics will enter the theater for the sequel hungry for blood (critics who hated the first one will hit it extra hard to feel vindicated, same with the critics who felt guilty about jumping on the bandwagon last time when it got inexplicably popular). Audiences should be satisfied if mildly disappointed, but this is a sequel and that’s the common reaction. At least the movie is genuinely subversive and funnier than any other comedy in theaters at the moment, with the possible exception of Bridesmaids. The Hangover brought in $500 million at the box office to become the highest grossing R-rated comedy of all time and also went on to be the highest selling comedy DVD ever, reaping untold profits. Based on brand loyalty alone the sequel will be a hit. Let’s just hope they put a little more effort into writing the next one. Perhaps Phillips and Galifianakis should have focused on this movie rather than running off to make Due Date between their Hangovers. Due Date was better than The Hangover Part II and I don’t think anyone saw that coming until the credits rolled on this new flick.

So, is The Hangover Part II funny? Absolutely, itâ€™s just also repetitive and the only reason I havenâ€™t described any of the new jokes is because I donâ€™t want to spoil the filmâ€™s few surprises.
REVIEW SCORE
5
File Under: