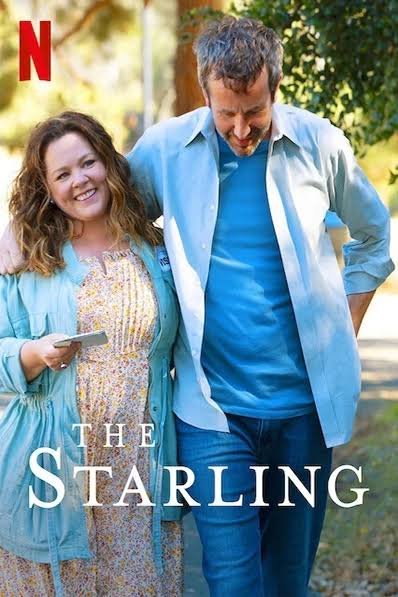 Heading into viewing The Starling, I had to mentally prepare myself. I knew the subject matter would be heavy and full of personal triggers. I also knew that the comedic side of things would likely lighten the mood right before it ripped my heart out, or directly after. I am a sucker for a good dramedy, but I can usually distinguish whether it’s my affinity for the genre swaying my opinion, or if the production itself hit all the right marks. The Starling leaves me unsure, which doesn’t necessarily work in its favour.

The film follows the Maynard’s (Melissa McCarthy and Chris O’Dowd) after the loss of their infant daughter, Katie, due to SIDS. Lilly is left just going through the motions day to day, while Jack is institutionalized after what we assume is the loss of Katie. The couple struggles to reconnect after the tragedy, and we follow along on their journey to cope with the brutal loss. Meanwhile, a stubborn starling takes up residence near Lilly’s garden, acting as a mirror for herself for the remainder of the film.

Any parent would agree that the loss this couple suffered is the worst thing that could possibly happen in any family. The loss of a child is wrong, unfair, unjustified, cruel—you name it, they felt it. But before heading into the film, director, Theodore Melfi, said The Starling asks the question, “How do we get back to hope after a loss?” I kept that in mind during my viewing, and could see it at every turn in both McCarthy and O’Dowd’s characters, though both in completely different ways.

Writer, Matt Harris, managed to look at grief and growth from two completely different perspectives. Many people who are coping with loss, trauma, and depression deal with it completely differently from the next. Harris did an excellent job showing us both sides of the coin, with Lilly using humour to cope while burying her real pain and Jack shutting down, unable to really identify how to move forward.

I thought I was heading into a “Melissa McCarthy movie”. I knew The Starling was a drama, but expected the usual one-liners and physical comedy McCarthy is known for.  Her character had plenty of quips, but unfortunately, I didn’t connect with her the way I thought I would have, especially as a woman and a mother. Her performance was good, but some cheesy CGI and in-your-face metaphors took me out of many of the moments that we were meant to see Lilly grow.

It wasn’t until she hit the anger stage of grief that I really took notice of her pain. It was something that I could identify with. Plenty of moments throughout the film told us, rather blatantly, how she was feeling, but constantly pushing the emotions down didn’t let viewers in deeper. Though we knew there was more under the surface, I wish I would have felt it, whether that was the performance, writing, or directing, I’m not sure.

What did surprise me, however, was the connection I felt to Jack. Watching O’Dowd throughout his journey began slowly, watching him distance himself from Lilly. As we get deeper into the story, we see that he isn’t taking his meds, and talks a lot about just needing time to figure out what comes next, playing off that he isn’t depressed, he just needs time.

Eventually, we come to the realization that he wasn’t just coping with the loss of his daughter, but that he had wanted, and attempted, to die by suicide. Not only that, but those feelings never passed. We see O’Dowd intensely portray Jack at his lowest, sitting in front of a pile of pills that we now know he was saving because he still intended to end his life. What saves him is the pile of unopened care packages from Lilly. One small gesture brings back exactly what Melfi wanted us to see, hope.

“The Starling takes on issues that, to parents, could feel like a horror movie.”

The film touches on triggers often—a room full of Katie’s things, a tiny sock, a child’s coat hook and kids playing in the yard. These things all seem small, but they can bring on a wave of emotions that anyone that has dealt with loss or trauma knows feels insurmountable at that moment. McCarthy and O’Dowd’s characters both react to these triggers in different ways, showing just how different two reactions can be to the same traumatic event. They also explore the resentment that can come from the two different coping methods, when Jack says, “I hate her so much for that, and I love her for it at the same time,” when talking about how Lilly can get through each day.

The Starling takes on issues that, to parents, could feel like a horror movie. We see the characters say things we have all felt, blaming themselves, thinking they could have prevented Katie’s death. The bird in the film is a direct representation of Lilly, being brash, rough and independent, but eventually needing care and compassion before it can move on to be something beautiful. It is a very blunt metaphor, and not the best CGI I’ve ever seen, but it makes its point.

Some of the story does require you to just accept it and move on, like someone recommending Lilly to a vet who once was a psychiatrist. The situations that bring Lilly and Larry (Kevin Kline) together are forced, but McCarthy and Kline have a sort of chemistry that I couldn’t help but fall for. Kline was funny and charming, even though he was blunt and harsh at times. His no-nonsense attitude came through perfectly, and given the material, he did the best that could have been done.

This movie struck me on a personal level. I have experienced great loss, I’ve been left behind after suicide, I’m a mother that couldn’t fathom losing one of my children. Perhaps that is why I was able to look past some of the story’s flaws. Exploring loss, trauma, depression and suicide are always going to be a challenge, but this film really displays how those feelings are not one-size-fits-all, and how important it is to find hope on the other side. The Starling may not be for everyone, but for some people, it’s going to be perfect.

Oh, and Timothy Olyphant was there too, for some reason.

The Starling managed to make me forget about all of its flaws through it’s compelling characters and heartbreaking story. Showing two very different sides of grief, the movie will connect with the people who need it the most.
REVIEW SCORE
7
File Under: TIFF 2021