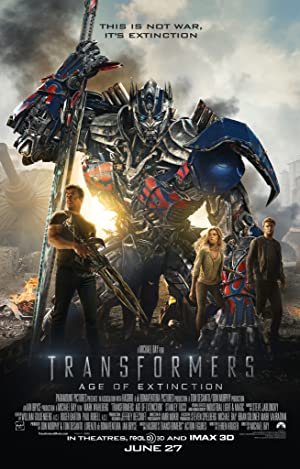 Transformers: Age Of Extinction isn’t a movie, it’s an endurance test. You could argue that Michael Bay’s entire career has been a never ending quest to discover “how much is too much,” but this one really takes the cake. You know all those jokes made about how Bad Boys 2 ended and then tossed in a trip to Cuba for overkill? Well, Transformers 4 pushes that style of blockbuster excess even further. The movie builds up to a 40-minute robot brawl climax, delivers it, and then tosses in a 50-minute trip to China with even more action for no apparent reason. Though that sequence in and of itself is not without its dumbbell Michael Bay charms, sitting through Age Of Extinction is like seeing the latest Transformers movie and then its sequel. That’s just too much to ask and even the most forgiving fan of this four-movies-and-counting precursor to the inevitable Gobots franchise has to admit that it’s just too much. This is a sequel too far that’s an hour too long with too many characters, too many Transformers, too many settings, too many action scenes, and just much too much in every conceivable way. I suppose that’s just the Michael Bay way, but even that guy needs cut back eventually. We’re in a recession, people!

So, the movie opens with Mark Wahlberg driving a pick-up truck through Texas while listening to country music. There isn’t a title card that says “AMERICA!!!!!” but that point is made and then underlined by including American flags in the background of almost every shot for the next hour of screen time (sometimes there are multiple American flags just in case you didn’t notice the first one). So, with Bay’s usual sledgehammer approach to subtlety, we’re introduced to Mark Wahlberg, American. He’s just your usual American guy who likes drinking American beer on an American farm while bringing up an American daughter (Nicola Peltz) in the American way and trying to live the American dream as an inventor/entrepreneur. Of course, he’s not very good at inventing. He just makes crappy robots and does repairs for neighbors while barely getting by. He does have a goofy assistant played by TJ Miller though (who is somehow a surfer in farmland, Texas) and they often buy goofy things like a giant truck hidden in an old movie theater. Shocker! Turns out that truck is Optimus Prime, who has been damaged in battle. So Wahlberg decides to fix him up like any good American, because as I said, he is an American.

“Possibly the most tediously excessive action movie that Michael Bay has ever made and given that he specializes in that particular brand of expensively fast-paced tedium, that’s really saying something”

Now, his daughter and comic relief assistant aren’t too thrilled with that idea because people are supposed to report any Transformer sighting to the government these days for a cash reward. Under the guiding eye of Kelsey Grammer (the film’s villain, no joke), the US government has been rounding up and destroying Transformers following the Chicago-stomping battle from the last movie. So, just as Wahlberg gets Optimus Prime working again and becomes his buddy, a group of evil government types (dressed in black, so you know they’re evil) show up to try and take the OG O.P. away. That leads to a big shoot out and chase with Wahlberg, Peltz, and her secret Irish boyfriend (honestly, who cares who plays him?) barely escaping with Optimus Prime. They discover that the Grammer has been partnering with a new and super evil Transformer to round up all the old transformers and give them to Stanley Tucci’s tech billionaire.

You see, Tucci has secretly been analyzing Transformers to figure out to make his own Transformers out of the special alien metal that they are made from (it’s called and I swear to god I’m not joking: Transformium). So Tucci’s got his own secret army of new Transformers with updated tech and wouldn’t you know it? One of them is Megatron. Oh no! So, Wahlberg and his new Transformer buddies attack Tucci’s techno palace for another massive Transformer battle in the middle of Chicago. Sounds like that’s the climax of the movie, right? Wrong, what I’ve just described is actually two hours of set up for an even bigger Transformer battle in China that involves some sort of Transformer bomb that Grammer and Tucci got from that super evil new Transformer. Plus the Dinobots show up in the last 20 minutes to make the movie even longer. Why? Who cares? The important thing is that Bay got to make even more things go boom and Paramount got to film publicity-courting sequences in the massive Chinese movie-going republic.

Now, criticizing a Transformers movie for being loud, stupid, meaningless, and gratingly commercial is pointless. Of course it is. That’s the franchise. Expecting anything else is the mistake. The movie is filled with idiotic dialogue, padded plotting, endless explosions, and confusingly staged action scenes amongst the indistinguishable Transformers (Bay even tosses in duplicates of the hero Transformers this time just to make it even harder to tell the difference between the good guys and the bad). All the same problems that you had with previous Transformers movies are here again, only this time there’s more. But all the good qualities of the Transformers movies are here too. There’s some genuinely funny comedic relief from actors like Tucci, Miller, and Thomas Lennon. Many of the action sequences are thrilling and undeniably impressive (especially an intense sequence in which Wahlberg and some bad guy chase each other down the side of massive and ungainly apartment complex in China). And there’s also no denying that Mark Wahlberg is a better action lead than Shia Labeof or that Bay’s filmmaking is often screamingly unintentionally funny. In fact, if this movie were an hour shorter, it might even qualify as a campy guilty pleasure.

However, Transformers: Age Of Extinction is not an hour shorter. Nope, it’s possibly the most tediously excessive action movie that Michael Bay has ever made and given that he specializes in that particular brand of expensively fast-paced tedium, that’s really saying something. It’s as if Michael Bay read the reviews of the last Transformers movie said, “Pffffft! They think that movie is too much?! I’ll show them too much!” and then went out of his way to do more of everything that bothered critics last time. It would be nice to live in a world where audiences could walk out of Transformers:  Age Of Extinction so confused and exhausted that they’d convince everyone they know not to see it and this blockbuster could bomb, ending the franchise. Unfortunately, that’s never going to happen. The movie will make a bazillion dollars worldwide based on the brand name alone and there will be another one of these stupid movies in three stupid years. Ah well, at least this turkey is still better than Transformers 2 and has robot dinosaurs. That’s something, right? Sigh…what a waste of time.

Now, criticizing a Transformers movie for being loud, stupid, meaningless, and gratingly commercial is pointless. Of course it is. That’s the franchise.
REVIEW SCORE
5
File Under: Blockbuster, Film, Mark Wahlberg, Michael Bay, Transformers