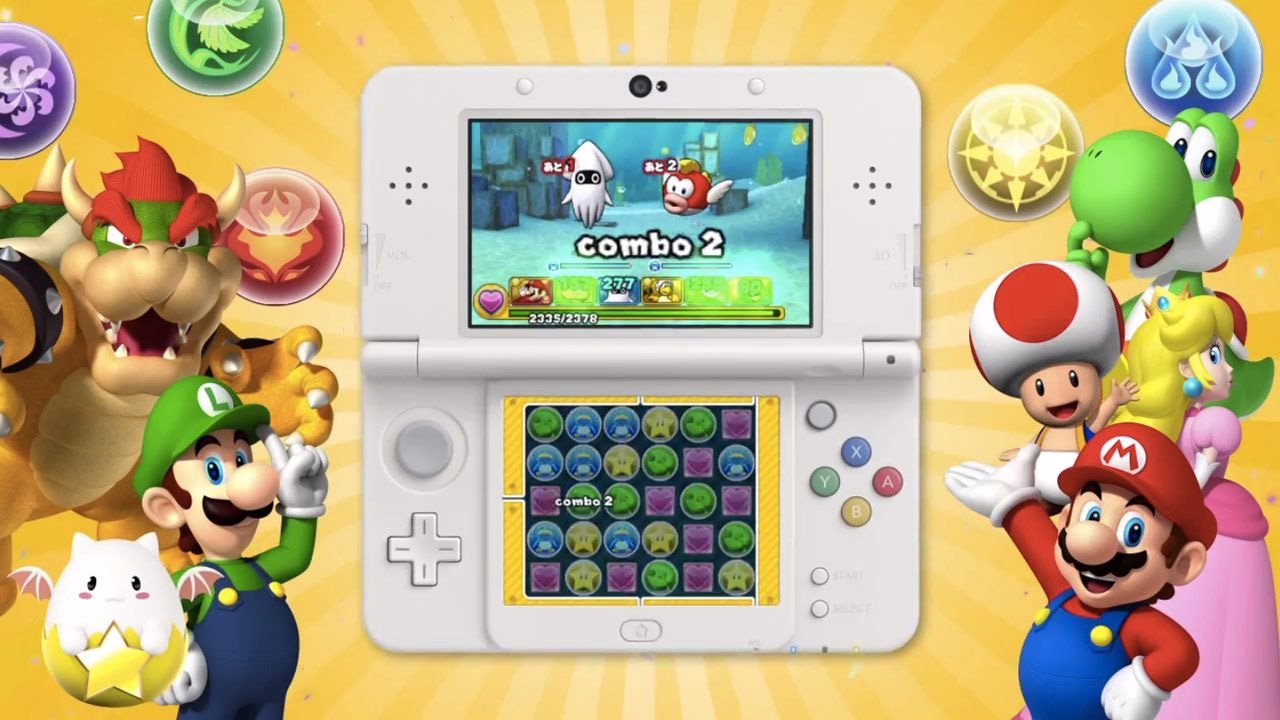 The people who invented Bubble Bobble must be kicking themselves over the fact that it was impossible to patent the match-three puzzle game design. Look over anyone’s shoulder while they’re killing time on their smart phone during a commute and you’re pretty well guaranteed to see some derivation of the design. It dominates casual gaming more than superheroes dominate blockbusters, and something about the satisfying simplicity inherent in that design seems to appeal to everyone. With match-three games as prevalent as they are, you might ask yourself how GungHo and Nintendo could possibly expect players to pay full price for this style of game on their 3DS? Well, the answer is threefold: a) you get two games for the price of one, b) there’s surprising depth and c) in an act of mercy there are no micro-transactions nor are there any ads. Oddly enough, the cartridge is actually worth the price of admission.
So, there are two versions of Puzzle & Dragons available to you once the plastic is cracked on this brand-spanking new 3DS title. The first is an updated version of Puzzle & Dragons Z, a free-to-play title that did well on the cell phones of children and bored housewives. The second is essentially a clone with Mario Bros. mascots added and as any self-respecting Nintendo Nerd will tell you, that’s good stuff. Though the game ultimately hinges on that classic design of matching up three colored balls, there are some surprising complications to make the game feel a little bigger. This is actually also a dungeon game in which the puzzles are broken down into battles. You creep along through a top-view dungeon and once an enemy is found the duel screen 3DS dedicates the top screen to a health bar battle and the bottom screen to a bubble puzzle that you’ll frantically solve to beat up the baddies. Each deleted row causes an attack and prolonged failure to delete a row of bubbles deals damage.
It might sound as though that’s little more than a gimmick complicate a simple n’ successful puzzle formula, but it’s surprising how well the battle system works on its own terms. For one thing, you have to select a team of characters for each dungeon map, all of whom have unique powers that help on the quest. Some characters increase your attack power, others can change bubble colors to get you out of a jam. It adds an extra layer of strategy and, along with a level up system, transforms Puzzle & Dragons into some sort of unholy alliance between puzzle games and RPGs. That sounds like an impossible combination, shoving together the most disposable of all casual gameplay styles with the most demanding and time consuming genre for hardcore gamers. And yet, somehow against the odds it works. The game offers instant gratification and rewards long-haul play and strategy. At first, you might toss off games and rely on luck, but as the dozens of dungeons gradually reveal themselves and the hours of play add up, it’s amazing how much thought and strategy you’ll actually put into this late generation bubble puzzle title.
The differences between the Puzzle & Dragons Z and Super Mario Bros. editions in this package are minor, but certainly add to the experience. Z leans more on the RPG elements requiring a build up of skill points for special tasks, while Mario. Bros. is a bit more streamlined and assigns specific skills to specific special characters. Then of course there are the variety of cosmetic differences. Z puts dragons, monsters, and other D&D clichés at the center of the action and even serves up a convoluted narrative of sorts. The Mario version on the other hand is streamlined, cartoony, and comfortingly familiar in all the ways that Nintendo has coasted on for decades (see also: Disney). Which one will appeal to you more is really just a matter of taste. Ultimately, both titles are the same game in either a Mario or fantasy package designed to tickle your nostalgia centers while serving up yet another match three bubble puzzler.
Whether or not the game is worth the handhold console investment is a reasonable question. Sure you get two full versions of this game, but it’ll also set you back $30. I suppose it comes down to how much you like these sorts of games. The way micro-transactions work, it would be easy to find yourself dropping $30 over time on just one of these titles if you plan on really getting into the experience. So, it’s probably worth the money. However, if all you’re looking for in a match three bubble puzzler is a quick fix between bus stops, then there are plenty of free options. This is a game for people who plan on really investing some time, effort, and brain power into their puzzle games. To those people I say, “Buy this thing immediately and kiss your free time goodbye.”

Final Thoughts
So, there are two versions of Puzzle & Dragons available to you once the plastic is cracked on this brand-spanking new 3DS title.
More From CGMagazine