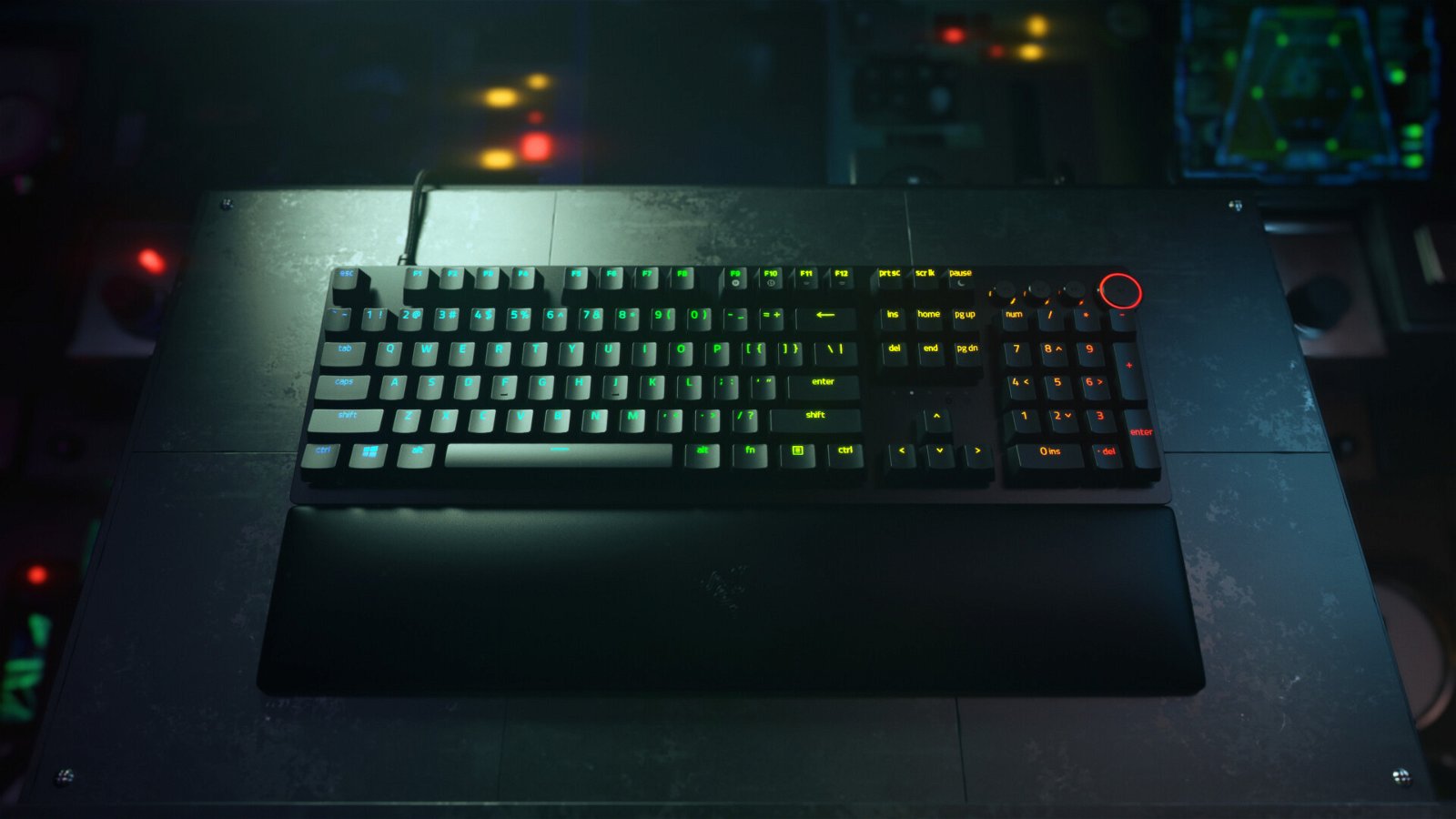 Razer is back with the latest iteration of the Huntsman, their optical switch based keyboard. Bringing with it much of what they have learned in past iterations, the new Razer Huntsman V2 is a refined experience. It takes the best features from past keyboards and brings with it great additions that make the gaming experience better. From a new wrist rest to the new Sound Dampening Foam, the Razer Huntsman V2 is the new keyboard to beat if you demand only the best.

For anyone who does not know, the Huntsman line differs from the standard mechanical lineup by offering optical switches. Using light to detect keystrokes, the switches are faster, more precise and, overall, a better experience. This is true if you are a writer, office junky or a pro gamer. The Huntsman range will offer an experience few other keyboards can compare to. The optical switches are more precise, offer less latency, and feel more responsive all around.

This speed is further enhanced by the addition of Razer HyperPolling. Using a microcontroller, the tech will allow supported peripherals to poll at a much faster rate, allowing up to 8000Hz compared to the industry standard of 1000. The 8K polling reduces the latency of keystrokes to 0.2ms compared to the standard 2.0 – 2.4ms for mechanical switches. With HyperPolling, the Huntsman V2’s switches even outperform other optical switches that are around 1ms, giving a much faster feeling keyboard, especially when in clutch moments where delays are not acceptable.

“The construction on the Huntsman V2 is some of the best I have seen from Razer.”

Razer is known for their double shot PBT keycaps, and the Huntsman V2 is no exception. All keyboard keys often look the same, but it means you won’t be worrying about the keyboard fading, losing characters, or just getting dingy over time. I have used many keyboards that do get shiny, fade, or just look gross after a year. Thankfully, that is not a concern with the PBT key caps.

The construction on the Huntsman V2 is some of the best I have seen from Razer. It feels solid to use. There is no flex thanks to the aluminum construction, making the keyboard easy to use for long periods of time without it ever feeling like it will break, even under heavy use. The keyboard looks good and feels good. I have found countless keyboards that look fantastic but can’t take the abuse. This is not one of them.

Even with this solid frame, Razer has made some improvements that make it quieter, a great thing when in an office setting. The Huntsman V2 now features Sound Dampening Foam, and surprisingly, it works very well. I have used the keyboard while on numerous TIFF and marketing calls. While it may not be silent (I would not want it to be), the foam reduces the overall noise, making it possible to type while using a microphone without being the most annoying person in the room.

I was testing the linear switch model, so this will be a bit less true if you opted for the clicky option, but even when compared to other linear switch keyboards, it is noticeably quieter while still giving a satisfying switch based feel.

“The Razer Huntsman V2 is a fantastic offering from an already amazing keyboard range.”

With Huntsman V2 taking over for the Huntsman Elite, Razer has made some changes to hit a more competitive price point while, for the most part, offering more performance for your gaming dollars. First, the not so amazing changes, the Huntsman V2 no longer features underglow lighting, so less RGB lights for your setup. Beyond that, everything is an addition, delivering a very similar looking keyboard experience, now with improved features, a new standard bottom row, and the better switches now with 8K polling. The price remains the same on the linear, with the clicky now only costing 189.99 USD compared to 199.99 with the Elite.

Running through our standard assortment of testing, including daily use for over a week, the Razer Huntsman V2 exceeded my expectations. I loved the past Huntsman, with the Elite being my go-to keyboard for the past while. But, overall, the speed and performance felt better. Playing games like Doom Eternal, Fortnite, and CS: GO, all felt more responsive. Since the Huntsman Elite was already a very fast keyboard, that is saying something.

While I don’t think anyone who just bought one of Razer’s latest keyboards needs to throw that away to get this, the Razer Huntsman V2 is a fantastic offering from an already amazing keyboard range. Razer has improved in the areas they need to, while delivering a striking, well positioned gaming keyboard that should exceed most people’s expectations. If you are in the market for a new keyboard, and demand only the best, get the Huntsman V2, you won’t be disappointed.

Razer has made a name for themselves with their keyboards, and the Razer Huntsman V2 is one of the best offerings so far.