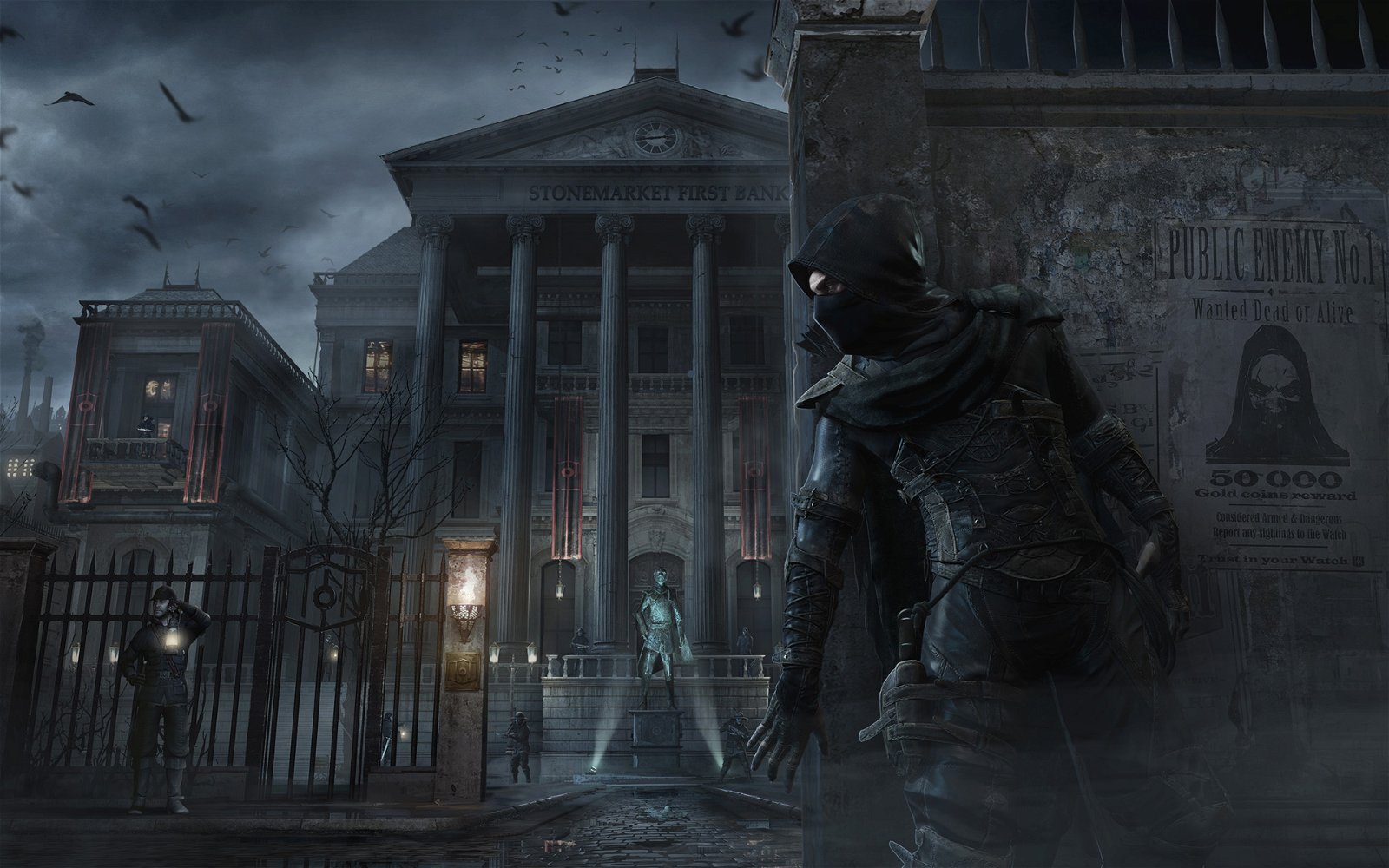 Breaking & Entering In The Eight Generation

It’s been a decade since Garret last snuck his way onto PCs and Xbox consoles with Thief: Deadly Shadows and the landscape of gaming has changed a lot since then. Two console generations later, he’s back, under a new developer with many other changes. The publisher is now Japanese (Square-Enix) and instead of using a modified version of the Unreal engine with the team that made Deus Ex: Invisible War, the new version uses a vanilla version of the latest Unreal engine courtesy of the team that made Deus Ex: Human Revolution. Fortunately, for gamers, the new game is a worthy successor to the Thief legacy.

Thief, which is thankfully no longer known as “Thi4f,” is a reboot of the series, so new players don’t need to worry about getting lost in some elaborate, ongoing saga. Garret, the protagonist, is out on the job with his female sidekick/rival, a protégé named Erin. A heist goes wrong, Erin is thrown into the nexus of a magic ceremony, and the game proper takes up one year later, with Garret trying to understand the changes to his city in the span of time that he’s somehow blinked through with no recollection.

There’s a decent, workman-like story at play here, penned by Rhianna Pratchett, although it’s not her best work. Garret is not as strong a character as her last effort, Lara Croft in Tomb Raider, and the plot of the game feels like it was forced to work with the constraints imposed by the design team for the levels they had in mind. There’s nothing terrible here, which is good since the plots of games can go horribly awry, but there’s nothing that leaps out as special or memorable either. Some competent dialog is interspersed with some functional turns of the plot, but nothing will shock or amaze. Players hoping for the emotional journey of The Walking Dead or the stunning twist of Bioshock won’t get that here. They WILL get some decent character motivation and just enough intriguing plot to want to keep playing to find out how it all ends, even if none of it is especially surprising. It’s not The Last of Us, but neither is it “Jill Sandwich” levels of Resident Evil.

Sound is probably where the biggest blunders occur. Hopefully there’s an incoming patch, but the game frequently tends to mix too many sounds at once, such as ambient dialog from nearby conversations interfering with mission briefings and cutscenes. Nothing kills the mood of exploration faster than an S&M routine moaning through the middle of some important cutscene dialog. But, as with the visual and text errors, there’s nothing here that breaks the game, merely takes some of the shine off. The most important thing is the gameplay, and Thief delivers in that department.

Thief takes after its predecessor Deadly Shadows and benefits from the experience of its new studio, Eidos Montreal, creators of Deus Ex: Human Revolution. This is not the same Thief that players of old experienced, and for purists that’s going to be an issue. For everyone else, the gist of the game is a first person action/adventure that’s more Splinter Cell than it is Call of Duty. Stealth, gadgets—and above all, theft—is the prime focus here, and if you go in knowing that, there’s a substantial, highly customizable experience that manages to blend quite a few different mechanics from different games here. The fusion is successful, but not innovatively so.

From Thief’s predecessor, as well Eidos Montreal’s own Deus Ex comes the core concept of a large, more open hub environment that connects to story/campaign levels. Garret’s home—known simply as “The City”—is a Victorian era pseudo-London filled with torches, gas lamps, guards with bright, dangling wallets, and many homes with rickety windows and locked doors that will open to a man with the right tools. It’s actually quite surprising how much extra content there is outside of the main missions. I did every side-quest on top of the main campaign and clocked in at just a little over 20 hours when I finished. There are at least two characters with involved “side-story” missions that Garret can take, his Fence, Basso regularly offers smaller side-jobs to pursue, and the theft ranges from simple breaking and entering to disarming traps and even stealing paintings.

Thief manages to offer a variety of missions that will be familiar to stealth fans of both the Metal Gear and Splinter Cell  variety. Players will avoid guards while navigating the environment, and the game encourages different playstyles, such as total stealth with no casualties and no detections, or more of a hidden predator-style; killing enemies unseen and taking advantage of survivor paranoia to maneuver victims into better killing spots. Rewards at the end of each level are given based on the playstyle, so there’s a lot of room for experimentation.

This carries over into the design of the levels as well, which, like Deus Ex, invite different methods of play. Some players might simply knock out guards and take the most direct route while others may diligently explore to find hidden vents, or out of the way climbing access to let them take the high road, unseen. No one particular playstyle dominates, although some levels—as with Deus Ex—will occasionally make certain playstyles much harder to execute, such as being surrounded by guards on high alert which will tempt some to simply break out the arrow and black jack for head shots and skull busting.

Thief is, ultimately, a game about stealth and theft that takes many elements from existing games, and successfully mixes them into a Victorian environment with an occasional supernatural bent. The game smoothly moves from levels that cover straight, conventional infiltration to moody, surprisingly spooky levels reminiscent of the infamous hotel level from Vampire-The Masquerade: Bloodlines. It doesn’t innovate mechanically or conceptually, but it provides a solid, first person stealth game which is a rare thing in today’s Call of Duty, set-piece action market. Just don’t expect the sheer variety of alternative methods offered by Deus Ex, the game’s stealth focus and Victorian setting don’t stretch that far.

This is a game that requires a certain mindset to enjoy. People that want slam-bang shooting need to stay far, far away. Thief is a more measured, deliberate experience, but it rewards exploration and experimentation. If you’re looking for a solid stealth option—with a truly intimidating set of customizations for difficulty—then Thief is a solid buy during this current drought in the new console generation. It’s not a high-octane action game, but it’s a slower-paced, fun and substantial experience for stealth fans.

*To read the full review, pick up the print or digital edition of CGMagazine Available in store and digital download

Thief, which is thankfully no longer known as “Thi4f,” is a reboot of the series, so new players don’t need to worry about getting lost in some elaborate, ongoing saga.