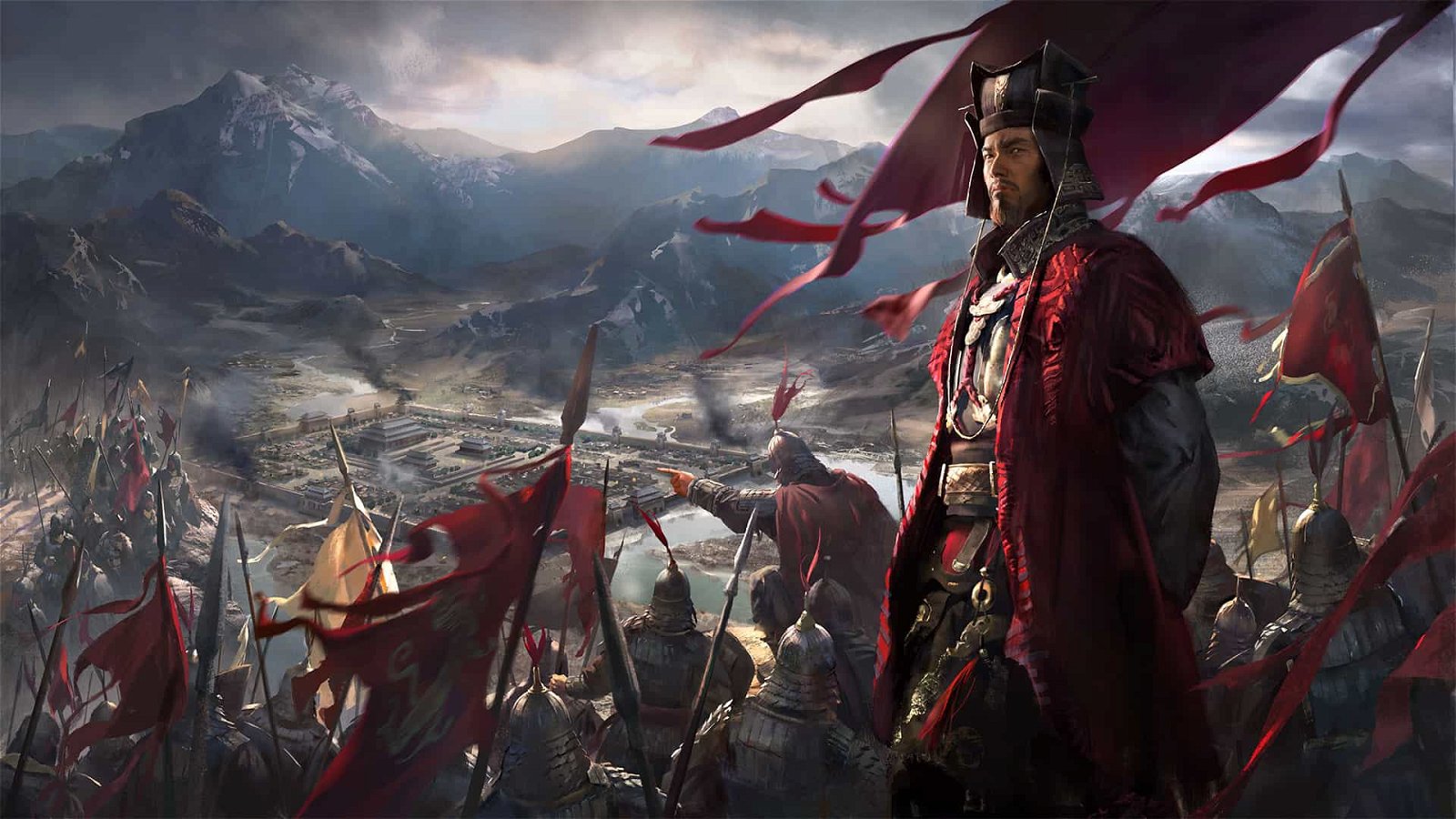 Total War: Three Kingdoms is a union between the two paths the franchise has taken in recent years. It is rooted in history and the fantastic, where great generals fought duels across China and thousands of soldiers collided on the battlefield. Fortunately, Three Kingdoms successfully translates an era known for betrayals, coalitions, and large scale warfare by revamping the campaign, particularly diplomacy, while retaining the epic scale of battle that has been a hallmark of the franchise for years. Put simply, Creative Assembly has turned one of the most famous periods of Chinese history into yet another excellent strategy game.

Three Kingdoms is set in 3rd century China during the titular period where the states of Wei, Shu, and Wu fought for dominance of the country for decades. While it is based on actual historical events, it equally takes inspiration from the historical novel Romance of the Three Kingdoms. The novel dramatizes the period itself, depicting its leaders and generals as larger than life figures who are both unstoppable on the battlefield and far more cunning than one could imagine. This leads to a quandary: How does one balance historical record against an extremely popular and memorable piece of fiction that has altered how the world at large thinks of that period of history?

Rather than combine the two together, Creative Assembly wisely separates the two from each other in two different game modes. Romance, the default option, is more in line with the fictionalized account of the period, with overpowered generals, quicker and more dramatic battles, and unique events based off of the novel. The other is Record, where generals are instead slightly above average units in the vein of past historical Total War games, and where battles take longer and require more thought out tactics to successfully win. It’s a smart move, because it both echoes the franchise’s legacy while still retaining the fantastical elements that made the Warhammer duology so popular. I spent most of my time playing in Romance, but Record was still engaging to play, even if my tastes aligned more with the default mode.

Regardless of which option you choose, the basic setup for each campaign remains the same. Choosing one of a dozen characters (Without DLC), you must navigate the fall of the Han Dynasty before carving a path through war and diplomacy to become the Emperor of a unified China. Each leader has different attributes, unique units, starting locations, and most importantly, allies and abilities that ensure that even though they won’t have unique playstyles in battle, from a strategic perspective they couldn’t be further apart.

Take Cao Cao as an example. Famous for his pragmatism when it comes to diplomacy and alliances, he can change another one faction’s opinion of another, to the point that they can form coalitions or even start proxy wars amongst themselves. In one memorable instance playing as Cao Cao, I was at war with a faction who was separated from me by a parcel of land that was occupied by a semi-neutral party. I manipulated the neutral party to start a war with my opponent, waited a few turns to let them fight, before forming an alliance with the formerly passive neighbor to swiftly conquer my enemy.

These types of strategic moves aren’t limited to Cao Cao either; for example, Liu Bei can swiftly become the lord of former Han Dynasty holdings through integration, but in his case, Liu Bei’s reputation in Romance makes him much more likable and popular than Cao Cao, allowing him to start forming alliances sooner and with far less treachery. The unique attributes of leaders are fine by themselves, but it’s how they interact with the bigger picture that they become truly useful and exciting.

If there’s any part of Three Kingdoms that is dramatically improved over previous Total War titles, it’s diplomacy. Having long struggled to be anything but an overly simplistic option in past games, here it is expanded upon to allow for a multitude of ways in which you can interact with the AI. Represented by numbers, you can now negotiate and haggle with other factions to achieve your goals. That can range from simple methods such as negotiating a trade agreement through the gift of food, to exchanging territories to bring about peace, to trading artifacts and specialists in order to secure passage through a mountain pass. In order to secure one powerful neighbor’s entry into a coalition I gave away my daughter’s hand in marriage to create a short lived but extremely beneficial partnership. There’s nuance to diplomacy now and it’s an extremely powerful and deep tool that the campaign makes great use of.

Even compared to past Total War games, the number of systems active at any given moment in the campaign is impressive. So much so, that it’s frequently overwhelming and it took some time for me to get the hang of it despite my familiarity with the series. Apart from diplomacy, you’ll have to manage the growth of your lands, espionage, the appointment of leaders to key government positions, an ever-growing and changing family tree, and the relationships between characters from across faction lines. Apart from your leader, each general and lord you recruit needs to be placated, whether that be through bribery, appointments to special positions, or battle. What’s more, those characters develop relationships with each other depending on your actions in game. Characters that work well together become friends, celebrating victories and crying over losses, while those that don’t are liable to fight and/or betray you for personal slights.

That might not seem like much, but having to keep track of character’s needs and relationships creates another layer of strategy. A civil administrator I had appointed to a low ranking role ended up leaving my service and joining a rival because I had both neglected to reward him and made him work alongside a bitter rival. I recruited a wandering commander because I had previously worked alongside him as part of a separate war, which caused him to become friends with a member of my retinue. I once even accidentally appointed a general who had seemingly defected from a neighboring state to a high position in my court, only to discover he was a spy.

This focus on character is one of my favorite elements in Three Kingdoms. It keeps the campaign fresh, no matter how many times I play it, and it’s filled with details that are both compelling to study and exploit, and interesting in and of themselves. From understanding how each of the five character classes work in battle, to learning the ins and outs of the personality traits, to equipping new gear and servants to commanders, to upgrading a skill tree; there’s a lot to do with just this one system, and it’s emblematic of Three Kingdoms as a whole.

The technology system has also been changed, primarily for the better. Now called reforms, which you acquire at a reasonable pace, they provide a bevy of useful upgrades such as new buildings, units, and policies that change the way you approach a game. What’s better is that they’re easy to understand, as each reform is color coded, prerequisites highlighted, and benefits explained concisely. However, most of the game’s factions share the same reform tree, and while you’ll pick different reforms depending on how you play, it would have been far more interesting to see different kinds of reform trees depending on who you play as.

In contrast to the campaign, the battle system underwent few changes. You still control troops in real-time, positioning them before each fight and ordering them with a few simple commands. Spearmen, swordsmen, archers, artillery, cavalry— they all make their return, and while there’s less of a focus on direct counters to units, by and large they operate similarly to earlier incarnations. It’s a style that has long worked for the series, and is just as solid here. Duels are one of the more interesting additions, with named characters slinging insults at each other as they go toe-to-toe in front of their armies, and are uniformly pretty to look at.

The biggest difference, however, is that your armies are less independent units led by a general, and more a collection of characters with their own individual retinues that serve them. Each character has a class, such as Strategist or Commander, that has their own unique skill tree as well as unique units that only they can recruit. You can’t swap units between generals, which is understandable due to the concept of a retinue of soldiers only serving their lord, but is a hassle to deal with regardless because it lacks flexibility. Each class has their own strengths and weaknesses, which makes coming up with diverse and powerful army compositions enjoyable.

It’s also fortunate that Three Kingdoms is gorgeous to look at, popping with colour in both battle and in the campaign map. Though based on history, the towering mountains, vast deserts, and choked forests feel mythical in nature. Soldiers, particularly named generals, look similarly excellent on the battlefield. Out of the entire game however, nothing quite stands up to the grandeur of a siege, as cities are detailed and battles take on an epic quality that does justice to both the time period and its fictional counterpart.

That, in the bigger picture, distills what I like so much about Creative Assembly’s latest. Three Kingdoms, to me, represents the best of both the historical and fantasy sides of the franchise. It creates stories that are compelling to play through and watch, using a vast number of systems working in harmony to achieve it. It creates the highest of highs, and the lowest of lows, and it does it all while still improving upon the Total War formula. Three Kingdoms an early contender for being the best strategy game of the year, and I feel like I’ll be playing it again and again for a long time to come.