A Great Mix of Science Fiction and Wonder 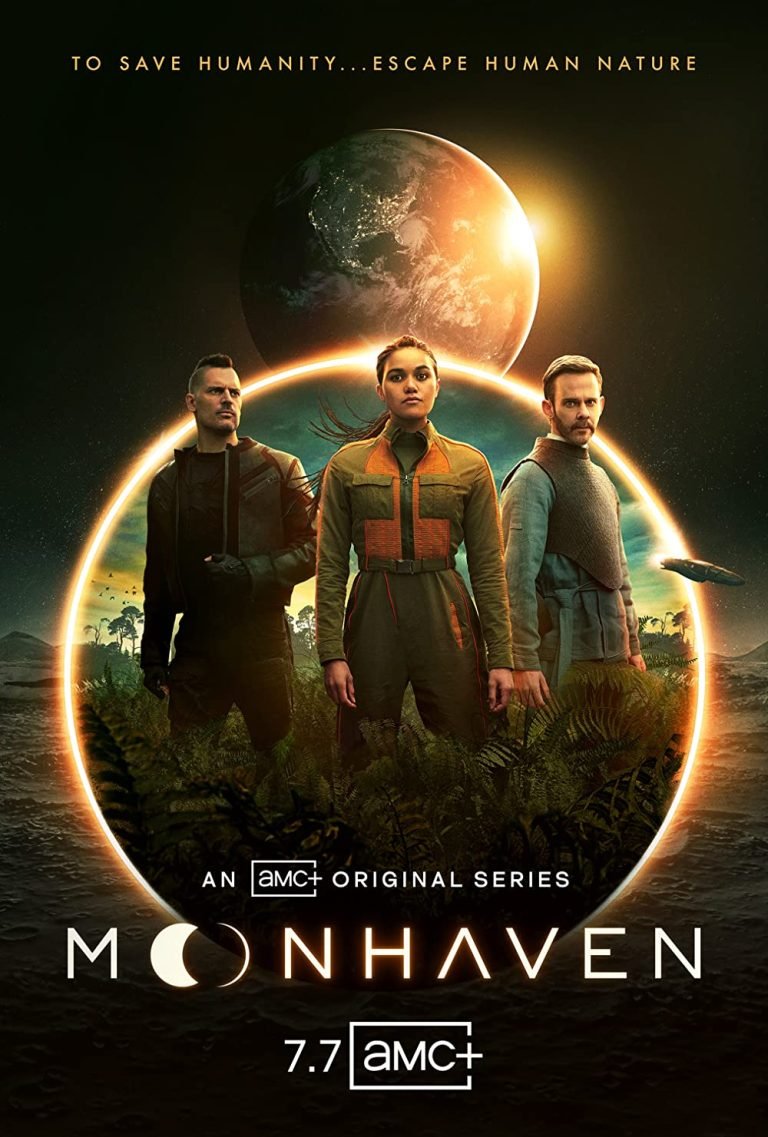 AMC Studios’ new futuristic sci-fi drama, Moonhaven, is a series that far exceeded my expectations. Boasting a fantastic cast including such actors as Dominic Monaghan, Emma McDonald, and Joe Magnaniello, the series brings a range of elements into a complex drama that explores everything from what it means to be human to whether people really have free will. While all the special effects and concepts may not hit as strongly as what Netflix or HBO are bringing to their streaming platforms, Moonhaven is a solid entry into the new AMC+ streaming platforms‘ portfolio.

As the Earth is slowly torn apart by disease, famine, war and overpopulation, a group works to find a new future for humanity. Building a colony on the moon, known as Moonhaven, this new initiative is made to be humanity’s last chance at survival. With the guidance of an all-knowing AI, the colony is tasked with finding solutions to the problems of humanity, with the generations grown on the moon imbued with a sense of peace and intellect to bring a new wave of prosperity to the people of earth.

“Moonhaven is a solid entry into the new AMC+ streaming platforms‘ portfolio.”

But while Moonhaven might be a beacon of hope for the people of earth, not everything is as it seems in the colony. Starting the series off showing the events around the murder of Chill Spen (Nina-Barker Francis), it is quickly made clear that there is something much larger going on under the surface. The idyllic moon colony is hiding a dark secret that will slowly be revealed as the series goes on. But for now, we are only given a glimpse of reality, and we must sit back and watch as the story slowly catches up to the information that we got a hint of in the early moments of the show.

Moonhaven takes notes from past mystery series’ and blends them with the near-future science fiction setting. We the audience have an idea of conspiracy and cult like activities, but the show never shows its hand too quickly. Information is slowly drip fed over the episodes as we get to know the characters, the world they live within, and the past they are all suffering from.

Opening proper with the buddy cop like dynamic of Arlo (Kadeem Hardison) and Paul (Dominic Monaghan), they uncover and try to solve the murder. It is through their actions that we get a sense of what the colony on the moon is like, how people interact, and how it is vastly different from what we understand in the current world. With an AI at the centre of everything, there are few secrets, and everyone is tracked, understood, and trusted, at least that is what we are led to believe.

It is not until Earther and lunar cargo pilot Bella Sway (Emma McDonald), along with terrestrial politician Indira Mare (Amara Karan) and her bodyguard Tomm (Joe Manganiello) make their way to the moon that the series starts getting the story underway in earnest. Bella sees something she shouldn’t have, exposing secrets on Moonhaven. The curtain of idealistic life slowly starts to slip away, leading to intrigue, backstabbing, and the questioning of what really is going on within this AI controlled colony.

There is a lot going on in Moonhaven, but showrunner Peter Ockoand his team have done a fantastic job blending the many story beats, utopian concepts with some good old fashion pulp fiction to make something incredibly interesting. While the show deals with complex and often hard to tackle ideas, there is a sense of fun and energy that makes everything work far better than it should.

Now, this is a series that while it can be fun, does take its lingo and world seriously, so you will have to accept there will be people talking for full scenes in almost entirely made-up buzzwords. There will also be plenty of bad CGI that we are meant to take seriously, even though it looks like something out of a B-movie from the early 2000s.

While the dialog may feel silly at times, and the Midsommar like setting can feel a bit hamfisted, the core of Moonhaven is incredibly compelling. The mystery and world lying just below the surface, is something that keeps getting more interesting as the series progresses, slowly building a complex tapestry that needs to be experienced to fully get the impact.

It is hard to say if the series will result in unforgettable characters that people talk about around the water cooler about like Game of Thrones, but there is real depth in the show that makes it strangely compelling. It draws on the right notes from science fiction and mystery, and we quickly come to connect with the characters and their strange but genuine world view. Series stars Monaghan and McDonald, build a solid bond that gives a sense of the Earth mentality, while getting a taste of why the Mooners have their beliefs and why they are so hard to challenge. A partnership built on their differences, that grows out of true compassion and want to see things better

Part allegory, part detective fiction, Moonhaven is the pulp science fiction I did not know I needed in my life. The world is rich with life and character, and the story is engaging, making for a win for AMC+. While not everything is polished, and the concept can feel clunky at times, the core of Moonhaven is must-watch TV delivering a campy hour-long drama steeped in mystery and nonsense technology that is waiting to be uncovered. While it won’t appeal to everyone, there is enough in Moonhaven to make it a great entry in AMC’s new streaming lineup.

Moonhaven is a great blend of science fiction and mystery that will keep audiences watching.
REVIEW SCORE
7.5
File Under: AMC+, Streaming