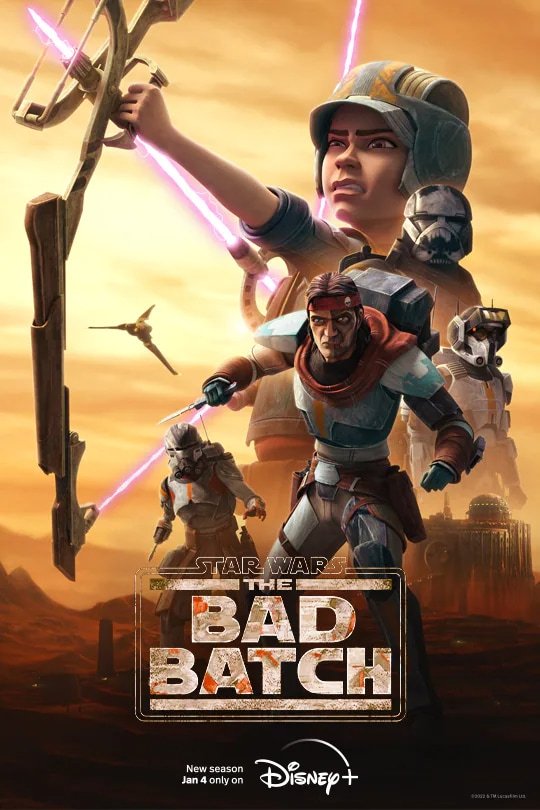 Back in May 2021, Lucasfilm caught me off-guard with season 1 of Star Wars: The Bad Batch. This band of unusual Clone troopers hadn’t wowed me with their backdoor spinoff pilot in the final season of The Clone Wars, but my low expectations for their starring role turned into fascination.

Happily, season 2 continues the same trends set in the first season by Clone Force 99—Hunter, Wrecker, Tech, Echo, and, by extension, their estranged brother-in-arms Crosshair. More than anything, The Bad Batch continues to prove itself as the true successor of The Clone Wars, moreso than Disney’s other animated Star Wars shows, Rebels and Resistance. This means the same pacing that’s always struck me as a little unbalanced, juxtaposed with some brilliant character moments.

Luckily, the over-the-top (and dare I say, Poochie-esque) attitudes the heroes exhibited in The Clone Wars season 7 and early in The Bad Batch season 1 continue to be tempered. Dee Bradley Baker continues his Herculean effort of voicing any Clone characters and other miscellaneous folk—so, roughly 75% of the cast.

Joining him as the unaltered clone Omega is Michelle Ang, rounding out the Batch’s personalities and giving them a humanizing influence. Omega’s training is a background focus for the season, as the clones do their best to raise her between missions and fights for survival. She remains The Bad Batch’s anchor both in the fiction and without, a counterbalance that the crew needed.

Rounding out the cast are various Imperials and Rebels, including familiar faces from the previous season and the larger Star Wars canon. I didn’t know I wanted to hear Wanda Sykes in this universe, but she’s a perfect fit—as is Steven Stanton with his rendition of A New Hope’s nefarious Grand Moff Tarkin.

I said of the first season that The Bad Batch caught me off guard with its depiction of the Star Wars galaxy immediately after the Clone Wars (the in-universe event and real world show) alike and Revenge of the Sith—something we’ve glimpsed through Marvel’s Darth Vader (2017) comics, but never from a more grounded or intimate perspective. Likewise, Order 66 and the death of the Jedi has been depicted in myriad flashbacks, but only from the perspective of surviving Jedi.

That infamous moment looms large over The Bad Batch even in its second season. It both informs the series’ stakes and motivates our motley band of heroes. Seeing the Clones continue to grapple with its reality as a collective adds a fresh layer of pathos to what should have been a cookie cutter class of monotonous soldiers. We see the Empire through another contemptible lens as it slowly replaces the Clone Troopers that secured its victory, planting seeds for the authoritarian nightmare we see later in Andor.

But, as I mentioned earlier, I still find The Bad Batch’s action sequences too prolonged. They’re well done, to be sure, but a distraction from the meatier main course of the series. I want more time for the characters to unfurl and the stakes to rise, and the commando intrigue starts to feel a little samey after a while. It’s the same pacing that leads me to be selective when revisiting The Clone Wars, skipping certain mini-arcs or jumping to the end of a skirmish. Rebels could stagnate this way at times too, but it also benefitted from a broader scope of perspectives to rejuvenate the narrative.

All told, The Bad Batch holds its position as nigh-required watching for The Clone Wars buffs and fans of the era between the Prequel and Original Trilogies. It continues to impress with its overall narrative growth, skipping a sophomore slump thanks to clever plotlines, perspectives, and performances. If anything, I almost wish it wasn’t aimed for a TV-PG audience; Omega is a minor grounding point for younger fans, but there isn’t as much of Star Wars’ usual antics to keep them engaged between the blaster fire and Wrecker’s slapstick cravings for destruction.

The Bad Batch stays the course in its second season, treading in The Clone Wars’ footsteps while further enriching both its unconventional heroes and the larger Star Wars canon.
REVIEW SCORE
8
File Under: Star Wars, The Bad Batch