One of the cutest games ever
SCORE: 6/10 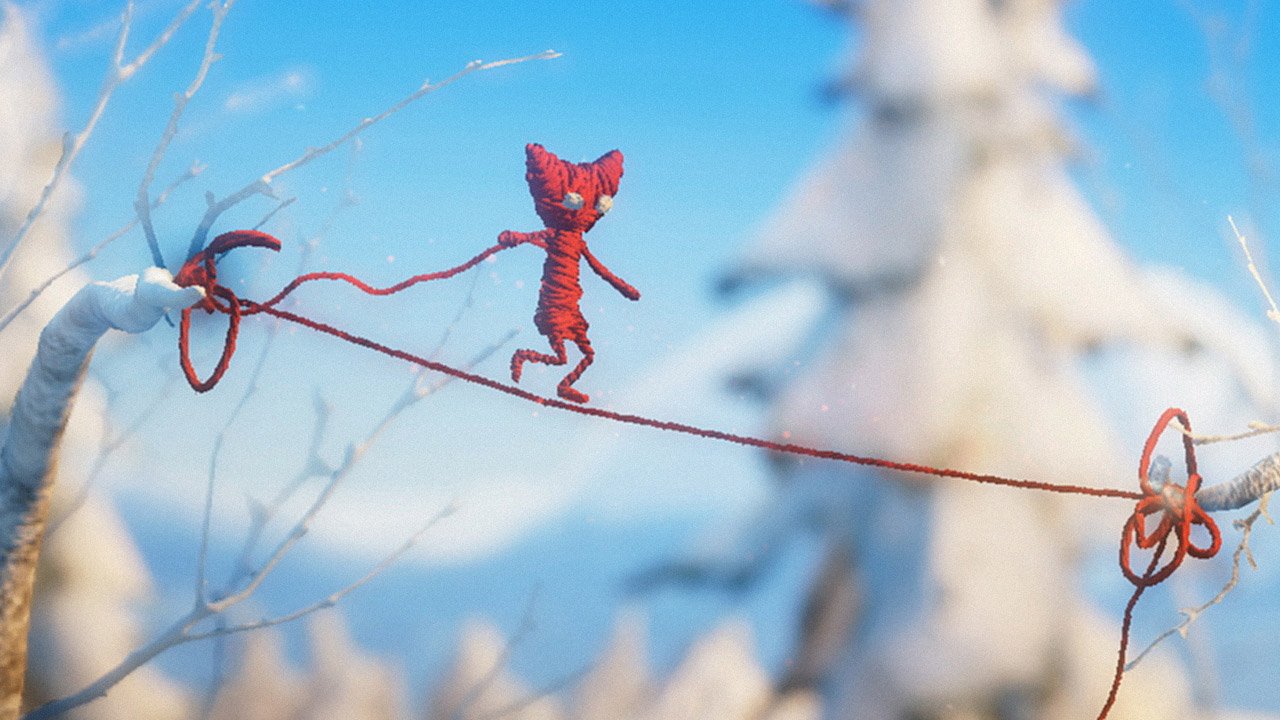 An old lady sits at a table looking through old photographs before grabbing her yarn basket and walking up the stairs to bed. On her way up the stairs, an unnoticed ball of red yarn falls out of her basket and down the stairs, eventually forming Yarnie, the protagonist of Unravel.

This intro sets the tone for a beautifully made game created by a small development team with a lot of love. Unfortunately for the developers, cuteness can only carry a game so far.

Yarnie enters levels by looking at framed photos around the house that take him through what I can only assume are the memories of the old lady from the intro. Each level contains glowing set pieces that show a memory, which Yarnie collects as photographs in a photo album to view after completing each level. There isn’t a strong narrative to be found here, instead just hints about the family life of the aging woman. Some levels don’t seem to relate to the others, at least in an obvious way. One revolves around two girls carving their initials into a tree with a heart around it; another is about dumping toxic waste. It wasn’t clear how these levels were related to the others.

Gameplay in these levels mostly consists of basic platforming that uses a lasso or whip mechanic, allowing Yarnie to latch diagonally onto pieces of yarn and swing across levels. While traversing levels, Yarnie slowly loses his yarn as it leaves a trail behind him, a feature that encourages intelligent use of his yarn resources. However, there are constantly stashes of yarn that serve as checkpoints throughout each area that replenish his supply, thus making resource management a moot point.

“While the gameplay isn’t exactly amazing, the graphics and charm of Unravel may be enough to have some players overlook its other shortcomings.”

The main issue with Unravel is that after playing two levels, you’ve already seen and mastered what is essentially everything the game has to offer. In the first level, you learn how to swing from your yarn lasso, how to wrap your yarn around points that are close to each other to make yarn trampolines and bridges, and how to push items to complete simple puzzles. The whole journey doesn’t take very long, just a few hours, but the repetitiveness makes it feel dull all too quickly.

Each level is laid out with the same mechanics and puzzles put to use over and over again, and becomes more of a chore than a charm to complete. You’ll find items next to areas that obviously require a rope bridge to be made so you can slide the item over it in nearly every level; as well as bouncing on rope trampolines. Not until the last level in the game is the formula ever switched up or advanced, and by that time, it’s too little, too late. The only challenge ever really on offer comes from areas where you can drown from falling or be picked off by crows swooping in to carry you off to your doom with one hit; artificial difficulty.

While the gameplay isn’t exactly amazing, the graphics and charm of Unravel may be enough to have some players overlook its other shortcomings. Each level is beautifully crafted to look like different places in the wilderness, with realistic wildlife in the back and foregrounds that Yarnie reacts to. The music that plays over each level is equally beautiful and matches the melancholic tone of the game perfectly. Easily the cutest and the most heartfelt game I’ve played in some time and one that was obviously crafted with a lot of love from the developers.

Unravel may be one of the cutest games ever to be released, but that doesn’t excuse its shallow gameplay that never really advances past the first couple of levels. If you can overlook the lack of substance for graphics and charm alone you might fall in love with Yarnie and his world. I, on the other hand, was hoping for a bit more.

Unravel may be one of the cutest games ever to be released, but that doesn't excuse its shallow gameplay that never really advances past the first couple of levels.