Dust: An Elysian Tail hearkens back to a simpler time in the action-RPG genre, where the plot advancement, character development, and exploration factor depended on you. These are all common traits of games released with the PlayStation 2 era, and it’s coincidental, as Dust is reminiscent of the cult Vanillaware hit Odin Sphere. Just without all the pesky chugging while knee-deep in combat. Dust is, in fact, a slicker, leaner incarnation of that excellent hack and slash gem, even if completely unintentional.

The whimsical tale begins with Dust, an anthropomorphic fox-like fellow who seems to have lost his memories. The only clue to unlocking them seems to lie in a mysterious blade he apparently summoned — that, and a spunky guardian creature known as Fidget. Together the trio set off to uncover the secrets of Dust’s previous life, and the truth behind the summoning. 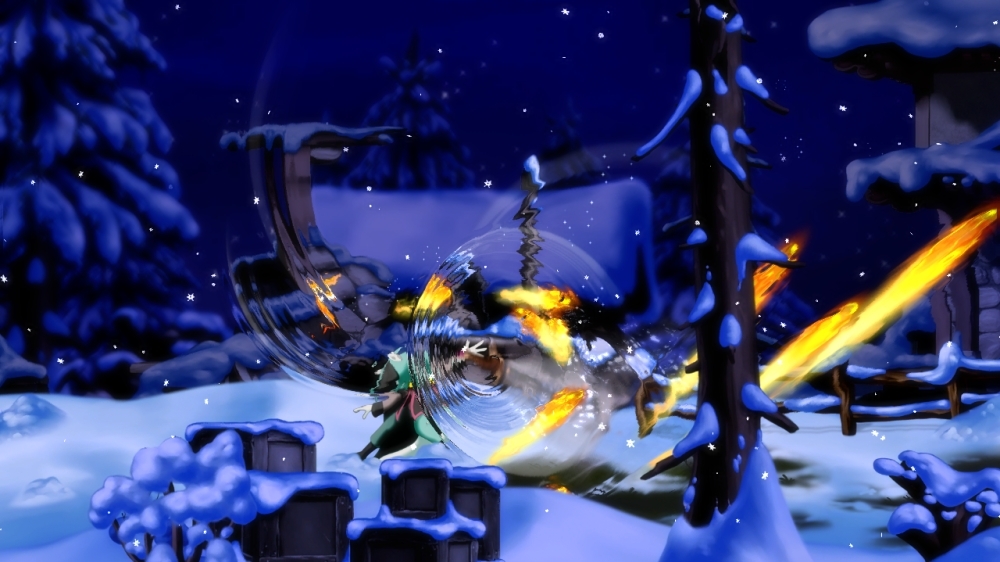 Gameplay consists of exploration via side-scrolling segments, separated on the on-screen map into smaller quadrants. As Dust you traipse through different areas fighting off multiple enemies who spawn in, discover treasure chests, and the keys required to open them, and unravel an engaging story that’s well-paced and exciting. Residents located throughout the world can be approached to give various quests, most of which involve scuttling back and forth between areas available on the world map, collecting items, or recovering lost characters. Occasionally you’ll be faced with some larger-than-life boss encounters and snippets of plot advancement (more often than not preceded by the running of majestic, adorable deer) but for the most part your journey through this Elysian Tail is comprised of hacking and slashing your way to the next level.

In no way is that a demerit against this beautifully crafted adventure however, it’s very much a breath of fresh air in a stagnant market .The bright colors, fun dialogue, and main cast go a long way to set a lighthearted mood that is still appropriately mischievous and mysterious when necessary. It’s ingenious in ways we haven’t truly seen since the character interactions of Lunar: Silver Star Story.

Slinging around your blade is immensely satisfying in addition to the multiple combos and special attacks between Dust and Fidget. Cutting through the hordes of advancing monsters is buttery smooth and fluid, eschewing the slowdown from games like Odin Sphere and similar games for a clean and slick combo system where movements are lightning fast and a 1000+ hit chain is realistically conceivable. The higher your chain, the better your reward comes in XP, eventually resulting in another level gained. While the grind may feel like an insufferable chore as far as so many other RPGs are concerned, it never feels as such with Dust. It’s so fast-paced andsilky you nearly look forward to encountering throngs of baddies, which is high praise indeed, even if the enemy types do tend to get a bit repetitive.

But it’s not just core mechanics in Dust where it draws so much of its delectable goodness — it’s just genuinely likeable. Whether it’s outspoken Fidget’s thinly-veiled Resident Evil 4 references or Dust’s tendency to blurt out awkward one-liners in the midst of a serious moment, you can’t help but smile at the silliness or let in the warmth you feel exuded from these familiar characters. That’s what keeps you coming back, in addition to the addictive looting, slashing, and storytelling.

Crisp visuals, a fantastic soundtrack, and an impressive campaign make Dust: An Elysian Tail easily the best Summer of Arcade release thus far, clearly ending the promotion with a bang. If you’re looking for an RPG with old-school sensibilities to spend a weekend or two on, Dust must not be missed. In fact, forget the rest of the XBLA Summer of Arcade games — Dust is where it’s at.

If you’re looking for an RPG with old-school sensibilities to spend a weekend or two on, Dust must not be missed.