The lovable little 3DS has been given grey cartridges containing games of nearly every conceivable genre in its short lifespan, with the notable exception of RPGs and first person shooters. Well, we shouldn’t hold our breath on a portable shoot em’ up coming out on the 3DS anytime soon (a shame because it would look glorious in 3D), however Square Enix just dropped a title onto the 3DS, so guess what genre just made it’s way onto the system? Yep, Heroes Of Ruin brings the lovable lifesuck of RPG to the 3DS in a hack n’ slash action form and given the company’s prestigious background with the genre (ahem, have you heard of Final Fantasy, sir?), the hardcore gaming set should be thrilled to have an epic quest to plunk in their pockets. Well…not so fast little RPG buddy. Unfortunately Heroes Of Ruin is obviously a pretty rushed job with cheap looking graphics and very little challenge. It’s not a disaster, so if you’ve been desperate to get this style of gameplay on your 3DS, it will at least temporarily scratch an itch. Just don’t expect much. You’ll get very little back.

As with all games of this genre, a confusing epic fantasy tale must be at the center, and Heroes Of Ruin is no exception. The game takes place in the magical world of Nexus where you must cure a cursed enemy named Ataraxis, ruler of the land. Of course, this being a land ruled by a royal family, you can expect there to be plenty of double-faced characters and betrayal that you’ll navigate through while striving to fulfill your epic quest. Confused? Don’t worry, it’s not that important. Despite all of the hard to pronounce names and bellowing voice acting, this game can be boiled down to a very simple repeating formula. You start off in the generic Nexus hub city, where you can accept missions and trade items with merchants. Approach someone who isn’t a merchant  or mission-launcher and you’ll get a generic “hello, goodbye” response, so don’t worry your little head about getting lost in an immersive world. Accept a mission and you either hack n’ slash your way to a boss fight, rescue mission, or item hunt. That’s really it, about as simple as kind of game gets. I suppose it’s satisfying if you’re a fan of the format, but the thing is undeniably repetitive. 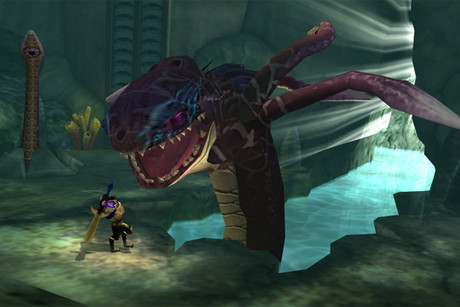 You can choose between four types of players for your quest to build up through a ranking system and customize to your heart’s content. There’s a sword swinging warrior with healing abilities called a Vindicator, a Gunslinger (go on, try to guess what he does), an elven Alchitect with average melee skills and powerful range attacks, and a Savage who beats up things real good. Yep, four character clichés of the genre, but you know what? They all work damn it, and are fun to play around with. Pick a character and you can follow him through the story mode that’ll take you about 7-9 hours to complete. Not that long, but the game is clearly designed for you to play through as each character once, so if you’re a completist you’ll have plenty of weeks to waste away with this thing. The controls are fairly simple, using the circle pad to move, buttons to attack and/or wield magic abilities, shoulder buttons for dodging and interacting, and the touch screen for all your menu, map, n’ item needs. I personally enjoy the touchscreen as a menu function in games like Ocarina Of Time or Resident Evil, it’s much better than pausing and having to navigate an in game menu. However, sometimes the various commands and menu screens can be tough to navigate in Heroes Of Ruin, leaving your character standing around aimlessly while you struggle to execute a simple command. I suppose in single player mode it’s not too distracting, but in online multiplayer you’ll find yourself powerfully irritated as a member of your team struggles to load up an item or prepare for battle.

What’s that? Did I just say online multiplayer in a Nintendo game? That’s right folks, this game is designed to be played with online compatriots joining in on quests. The game’s graphics are pretty pedestrian (I’d go as far as to say they are at PS1 levels) purely to facilitate that online function. This is a pretty ugly game from a design standpoint. The top down 3D is a nice effect that helps the visuals, but there’s no denying this thing looks like it’s from another era of gaming and not a new release. However, when you’ve got a collection of teammates, the silky smooth gameplay makes up for that. The team play dynamic does unfortunately bring up another issue though. Perhaps Square designed this game to be an Action/RPG-lite intro to the genre for new games, but whoo boy is it ever easy. There are so many items kicking around and health refreshers that dying isn’t much of a concern. Throw in a team of human helpers and boss fights aren’t even that difficult with most easily defeated simply by rushing towards the boss as a team and collectively tapping attack buttons until the poor guy is crushed. I suppose this low difficulty level reduces frustration for inexperienced RPGers, but this genre isn’t supposed to be about breezy play. There are platformers, shooters, and beat em’ ups for that. Beating an RPG (even of the more streamlined action variety) should feel like a hearty accomplishment, not just a race to the finish line. While it’s wonderful to see a 3DS title that embraces online gameplay, I’m worried this one will be rather fruitless for fans of internet based multiplayin’. Aside from the lack of challenge I just mentioned, there’s also the issue of whether or not you will even be able to find people to play with. Heroes Of Ruins shipped into stores in small numbers with virtually no promotion and is on a system that is hardly known as an online hub. Within a few months this game will be a baron wasteland populated only by souls so lonely, they don’t even like to socialize in online multiplayer games. Square has promised daily and weekly special items with unique abilities that will in theory keep players coming back, but I just don’t see that happening.

Ultimately, Heroes Of Ruin isn’t a disaster, just a missed opportunity. It’s nice to see this type of online action/RPG can exist on the 3DS, but a bummer about the crappy visuals, lack of challenge, and the inevitably miniscule online community. Enough works that it can be recommended to die hards of the genre, simply to give them something to play in the baron summer videogame months. Yet, even then experienced RPG nuts will waltz through this thing quickly. However, I wouldn’t completely write off this title for one thing. Regardless of how flawed it is, Square Enix proved this style of gaming can be done on the 3DS, so hopefully they’ll come back with something better in the future. My hope is that this is just a Beta dry run for something bigger and worth getting excited about. If that’s the case, then one ho-hum game is worth it for a worthy title down the road. On the other hand, enough of Heroes Of Ruin feels like a rushed write off that perhaps the folks Square Enix got bored with the limitations of the 3DS half way through production and spat this through the machine quickly to be done with it and move on. I choose to be an optimist and hope the company has something brewing to blow us all away in the future. That’s no way their only addition to the system will be a game this mediocre, right? Right?

As with all games of this genre, a confusing epic fantasy tale must be at the center, and Heroes Of Ruin is no exception.