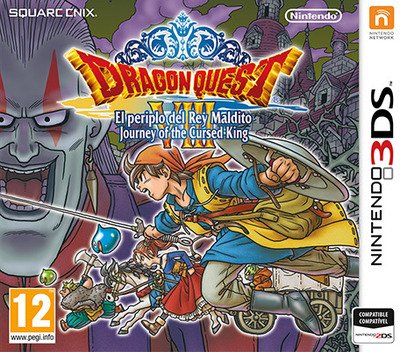 The once peaceful kingdom of Trodain has been left in ruin, with both its walls and citizens transformed into a dark forest of thorns by a malicious magician’s powerful curse. With only an uncursed hero and a transfigured royal family left alive to lift the magic, players must find a way to restore what has been lost in the latest RPG remaster for Nintendo 3DS, Dragon Quest VIII: Journey of the Cursed King.

It has been over 11 years since Dragon Quest VIII originally arrived in North America as one of the many memorable swan song RPGs the PlayStation 2 had left to offer. I remember investing over 100 hours into the original title in an attempt to finish every quest and I couldn’t be happier to experience one of my favourite childhood games again on a portable platform. That doesn’t mean this game is just a pure nostalgia trip however, as new gameplay tweaks and story events have been added to make this release the definitive experience of Journey of the Cursed King.

The most notable change to Dragon Quest VIII is the inclusion of two new party members: the mischievous Red and comical beast-tamer Morrie Mozzarella, who originally served exclusively as side characters. Their inclusion brings the total number of playable party members to six, adding some much needed gameplay variety over the 70+hour journey. I’m a little disappointed they don’t have the breadth of unique skills the original party members had, but their new weapon types are likely where a majority of players are going to invest their skill points .

Other changes affect monster encounters and leveling up. Originally, Dragon Quest VIII’s 3D open world suffered from an annoying random encounter system, where it would take only a couple steps after a fight before a new one would occur. This kind of system made it so that the largest threat with which the game pummeled the player wasn’t the intimidating bosses, but the horde of mobs that range from 1 to 7 enemies per encounter. This issue has been properly fixed with the ability to see the monsters live in the open world, allowing the player to assess what kind of battle they wish to engage in. Lastly, once the party of heroes level up, players no longer have to decide immediately what tech trees they want to invest their skill points in, and can instead bank them for later when they purchase new equipment.

Dragon Quest has always been a beginner friendly RPG series. The beauty of Journey of the Cursed King is in its simplicity, offering an easily understood but tight story that any kind of player can approach with ease and play at their leisure. The game offers a wealth of depth through its alchemy pot crafting system for those players who like trying to break equipment progression and the risky but rewarding hi-tension mechanic always makes boss battles feel more intense. Akira Toriyama’s art shines throughout the experience, despite being limited by the 3DS’s low-resolution screen, and the score warmed my heart with the classic music featured across the franchise.

However, current RPG junkies may feel the game is too dated for this modern era of action intense battles and award-winning vocal performances. The charm of Dragon Quest VIII for me has always been how it feels like a child’s fairy tale, crafted with the mediocre English impressions and memorable adventures that our parents used to read to us when we were young. While the writing can be cheesy at times, and the gameplay may appear barebones in comparison to newer titles, I actually enjoy that kind of campiness from a series like Dragon Quest and it never detracted from my personal experience.