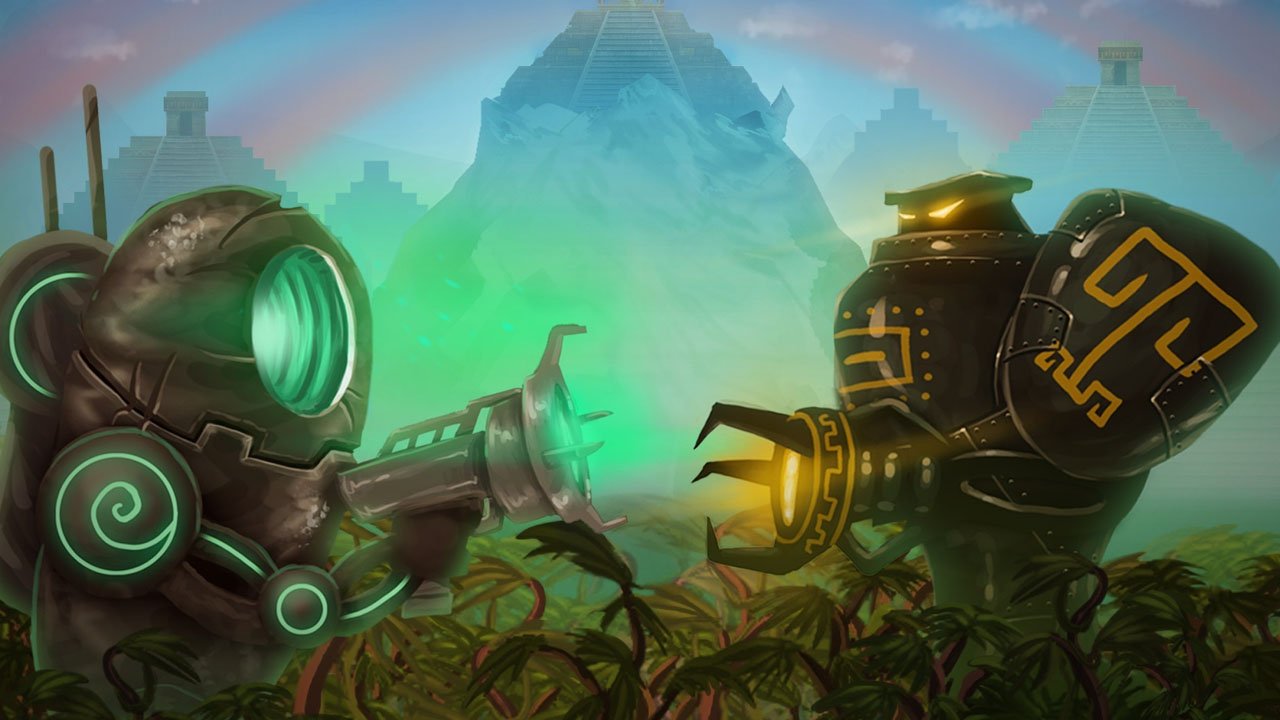 Mayan Death Robots. Sometimes you only need a name to hook people. Mayan Death Robots isn’t necessarily a good name, just one that, like Goat Simulator or Mega Shark Vs. Giant Octopus, positions itself perfectly for memetic transmission. You instantly know it’s something light, silly and easy to pick-up and share.

Mayan Death Robots is a multiplayer artillery game. There’s an online mode, but there’s no doubt in my mind that it’s best played locally where you can see tears and taste salt. The set-up is simple: two giant robots are placed on opposing sides of a 2D arena – all part of an intergalactic entertainment show! The aim of the game is to destroy the enemy’s power core. You play simultaneously (so you’ll need two controllers), lining up your shots and letting loose at the end of the turn timer.

It’s a mixture of Tank Wars and Worms. Each robot is themed after a Mayan god and has a unique set of abilities – some twist on a bomb, grenade or missile. There are machine gods that fire lightning bolts from the sky, drop flares to signal nukes and fire projectiles which either push or pull nearby objects. The two most powerful bots seemed to be the metallic monkey Hun-Batz, who chucks bananas and hurls boulders, and the unlockable tin-can Itzamna, whose projectiles drill through terrain. Of course, there may well be counters to both. For example, Robo-man Xbalanque can clear out swathes of land and then use his pull-missile to drag the enemy power core out of the arena for a quick, if cheap, victory. Akna fires spider drones which move about the map and dig through things. Both characters have interesting abilities that can catch an all too offensive monkey/drill-man off guard.

On top of the offensive abilities, all of the robots can place down Tetris-shaped terrain blocks to defend their core. You can also jump. Jumping is your only real form of mobility, and it’s often necessary to get a better vantage point, particularly after the ground beneath you is obliterated. Defending your core is a tribe of tiny Mayans, who’ve mistaken your robot for a literal god, and who will attack your opponent if they get too close. This mechanic ensures there’s always some distance between you and the enemy, and tracing your trajectory will always take a bit of skill. Each time you kill one of the miniature Mayans, your explosive power increases. The maps are filled with these sorts of side targets, things like enemy-built catapults, totems and eggs, all of which increase your blast radius. Together they work to incentivise you to aim for things other than the enemy’s power core.

Mayan Death Robots also includes bosses. One level sees Kukulkan – a momentous snake deity – turn up and flatten the landscape, forcing the robot pretenders to temporarily set aside their feud in order to deal with him. The colossal Cabrakan also makes an appearance and shakes things up. The robot who slays the god is rewarded with a massive increase in blast radius, yet amidst the spectacle, there are also cheeky opportunities to alter your trajectory last-second and land a cheap shot against an all-too focussed opponent.

Death Robots doesn’t ever reach beyond the suggestion inherent in its name – it’s a quick bit of fun between friends; an explosive, occasionally comedic display, not something that’s likely to last long like the Mayans. It’s got the meme-potential, but will that be enough?