Addictive with plenty of bullet holes to fill 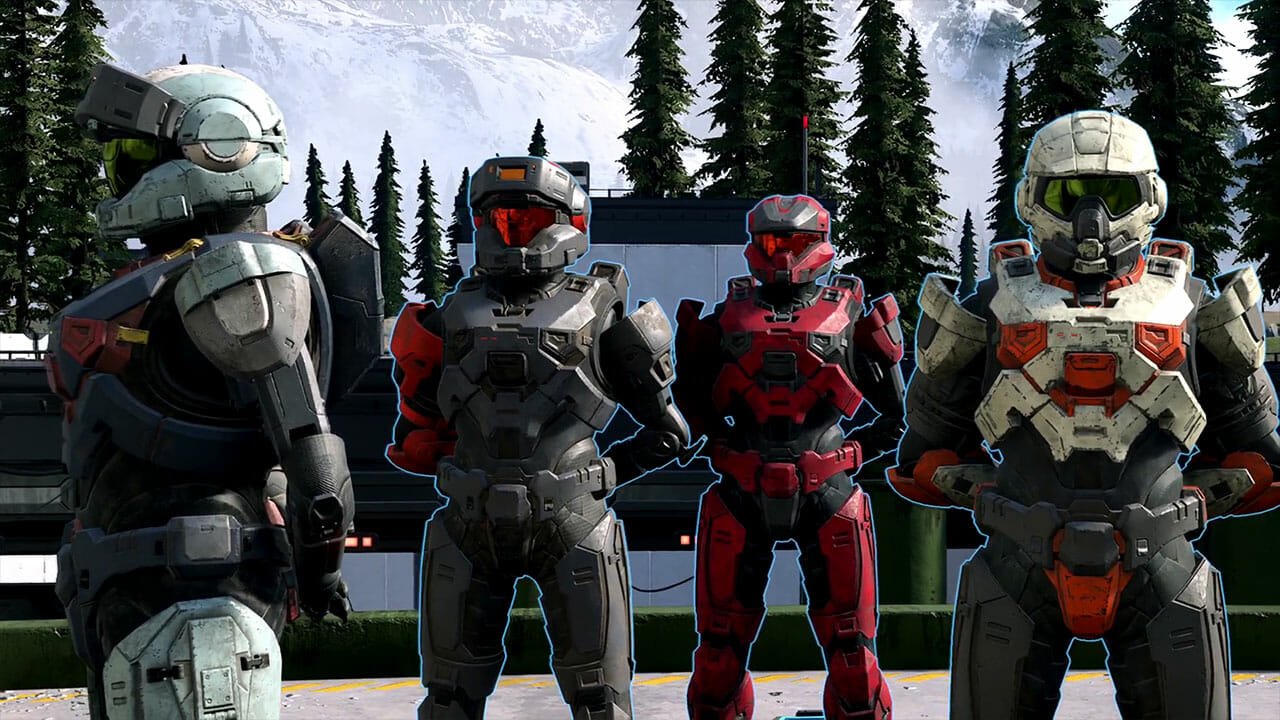 Halo Infinite is shaping up to be a decent return to PC. Ahead of time, its early tech preview let insiders finally play a bit of 2021’s hotly anticipated shooter. But there was also much transparency for 343 Industries. Showing off the unfinished Multiplayer portion of Halo Infinite would be a large step for PC players, left considerably in the dark after delays. This improved with a transparent roadmap, including that early preview made available in July 2021.

The three day preview left a bittersweet taste. For one, it was filled with plenty of game breaking bugs which soured Halo Infinite’s flow. Two: I had an addictive time playing Slayer for hours on end. Three: I hate waiting for release dates, but understood more behind 343’s reasons to delay the game.

PC players would be waiting as long as Xbox Series X owners. This would be the first mainline Halo title to launch simultaneously on both console and computers. It’s no simple task bringing Master Chief into the next generation scene for Series X. 343 would also split their effort optimizing Halo Infinite for as many rigs as possible. These efforts ultimately led to a firm, but necessary decision to delay the game until later 2021.

Thank the Forerunners this happened. July 2021’s preview showed players just how far 343 has come. More importantly, how much further the finish line is for PC players. As previously outlined from 343’s PC plans, its dedicated team has made a dent.

Halo Infinite feels more optimized to run on as many PCs as possible. This stems from the game now offering a range of standard PC settings. Adjustments to textures, volumetric lighting, shaders and minimum frames all make a difference. PC players can tailor Halo Infinite to keep up with its fast-paced firefights. All the while playing with the most personalized controls.

When The Master Chief Collection finally reached PC, 343 also made plenty of lifelong dreams come true. Developers went to pizza heaven. PC players could enjoy their favourite Halo titles with a mouse and keyboard. Laptop gamers could finish the fight after class.

But this proved to be a challenge without all the games at launch.  Its suite of games would be taking a U-turn from consoles. 343 would give players a full range of custom control options. Graphics would be limited to a few enhancements, since the mostly 360-era of Halo ran like butter on every rig. Halo Infinite brings the series into a modern PC scene properly.

Enough history. Come to think of it, Halo Infinite is the firstgame that isn’t a PC port.

“Halo Infinite’s preview on PC feels like a dedicated experience. There’s absolutely no baggage from its Xbox Series X counterpart”

This is important to note, as Halo Infinite’s preview on PC feels like a dedicated experience. There’s absolutely no baggage from its Xbox Series X counterpart. Closer to polishing. Crispier for the shiniest PC builds with 3080s.

Halo Infinite’s preview on PC felt kinetic and chaotic. Its running and gunning combat feel refined from years of past Halo games. Mouse and Keyboard controls work with less clunk than it did with The Master Chief Collection. It still arguably feels better than an Xbox controller, thanks to the dexterity of every finger on a key. Every action feels faster. Aiming on a mouse feels incredibly deadly, while shots register according to my reactions. Even against the preview’s bots, kills felt possible. Much easier. Halo Infinite definitely fits the PC standard of a sprinting and shooting experience. Though it eerily feels like Call of Duty, players can weave and parkour through maps with ease. All the while tracking enemies with their mice and clicking until they die. In other words, Halo Infinite’s multiplayer experience already felt like a fluid evolution over past games.

Key bindings are a PC perk. Players can map out their own reachable actions. I couldn’t resist starting my Halo Infinite preview by seeing the options. The possibilities were endless in making spartan abilities easy to reach. Putting my grenade throws to my mouse thumb. Executing melees as fast as my index could touch F (and not to pay respects). The PC experience just puts the tactile back in tactical. Unlike the Series X controller, I wasn’t restricted with thumbsticks. Turning was lighting fast on high mouse sensitivity. Plenty of enemies failed to get me from behind, thanks to instant 180-degree snaps and returning fire.

As mentioned, the preview build is incredibly well optimized. This is measured just by how well the game uses your PC hardware. Does it take full advantage of the CPU and GPU without choking up the frames? Absolutely. There’s promise in seeing Halo Infinite stay above 60 frames per second, which becomes a minimum for modern presentation.

343’s extensive graphics settings didn’t feel tacked-on as they did in The Master Chief Collection. I felt a real effort to help me gain the most frames and beauty.

There’s a clear love for players able to output at 4K with high frames. Premium PC setups get the most out of Halo Infinite’s resolutions. To stay at 60 frames, the preview gave players a minimum framerate. This setting is near essential for older gaming rigs that barely make the minimum requirements. Minimum framerate is a spin on dynamic resolution and naturally changes the graphics for smoother performance. Players might notice Halo Infinite’s graphics blur or crisp before their eyes. But over the constant pace of Multiplayer, it’s a fair cost to keep Infinite free of stutters and freezes.

Halo Infinite stayed incredibly smooth over my 2019-era rig. An Intel i9-9900K, RTX 2060 Super 8GB and 32GB RAM were all it took for the game to stay on Ultra to High settings. I even reached maximum for textures, giving surfaces the finest details without a hitch. Realistically, I could reach High for objects and edges.

343 took consideration for the game’s presentation with PC-standard video settings. Lighting, shadows and fog make Halo Infinite as pretty as its next gen console sibling. The PC version can look identical to the Xbox Series X version. But I spared my GPU with high to medium settings. Halo Infinite’s preview still looked wonderful without Ray Tracing. But I was concerned frames weren’t higher without them. This didn’t stop me from cranking most of my graphics to high, thanks to the minimum frame setting. Without it, frames would start to drop in a mix of hardware stress and occasional connection spikes.

PC players do have a big benefit over Series X players for connectivity. There’s no Xbox Live required. But the preview demanded a stable internet speed. Sadly, this didn’t stop Halo Infinite’s preview from torturing PC players with god awful matchmaking. It didn’t take long to load into a game. Until it didn’t, and sent my spartan ass back to the main menu. The preview brought out the need to fix this, while the free-to-play multiplayer format balances on speedy matchmaking. There’s no doubt millions of Xbox and PC players will come in full house on launch day. For 343, it’s a race to make sure more players can stay connected and play more matches.

Sweet PC gameplay aside, Halo Infinite feels messy. Bigger concerns came from delayed screens after matches. Halo Infinite’s PC preview missed plenty of animations and scoreboards at the end. There were also plenty of black screens which acted as a placeholder for loading. These missing details added to my worries and a lack of polishing 343 had delayed the game for. This was Multiplayer at its barebones. Despite this, the preview was still fun when it worked. Unfortunately, the first preview day was filled with loading. I was sick of being stuck on a black screen with startups. Halo Infinite shouldn’t take three minutes to start up, even by older PC standards. But I trust the game will be launchable after 343 gets its crucial feedback from insiders.

The preview only lets real players fight bots. This didn’t exactly tell players what matchmaking was like for online opponents. Halo Infinite’s servers paired me up with real players, but never against them. It’s a missed opportunity for PC players, eager to bring that competitive spirit. PC players might have an easier time managing some surprisingly aggressive bots. I appreciated the fight each one put up while making each match worthwhile. It was great practice against future players zipping around each map. PC players had plenty of opportunities to fine tune their setting before the game launches. Bots made it easier to focus on the technical feedback at hand while enjoying a killing spree.

Halo Infinite also teased three of its close quarter maps. An update a day gave me a new way to play. It’s no surprise that 343 packed smaller locations for 8 players. This made for some fast-paced gunfights. Even with bots on the challenging ODST difficulty, it didn’t stop my team of real PC players from winning every match. The AI was no match for mouse and keyboard players. Bazaar, Recharge and Live Fire are already some favourites of mine to pick when the game launches. They also showed off a playground which took spartans high and low. PC controls made parkouring more fluid. Halo Infinite also does away with thrusters from Halo 5 Guardians. It retains a red vs blue faction, but drops Guardians’ eSports arena design and makes Halo Infinite’s maps feel grounded to lore again. The maps and boots-on-ground combat bring Halo back to its roots.

I’m more curious than concerned with Halo Infinite. Its turbulent development cycle led up to a preview which told me something; more testing is needed. The gameplay is fun and fast over PC. Its photorealistic graphics were surprisingly not that demanding. Making Halo Infinite free-to-play includes giving the world an opportunity to access the PC version. That means expanding previews for a real stress test. There are only two next generation consoles to play Halo Infinite with. But a myriad of potential PC players the game can reach.

Halo Infinite releases on PC and Xbox Series X later in 2021. Its single player campaign will be a paid component. The full multiplayer mode will be free-to-play with live service. Players can also get some multiplayer practice ahead of time in The Master Chief Collection already available on PC.