The Walking Dead: Aftershocks Was Not What I Expected 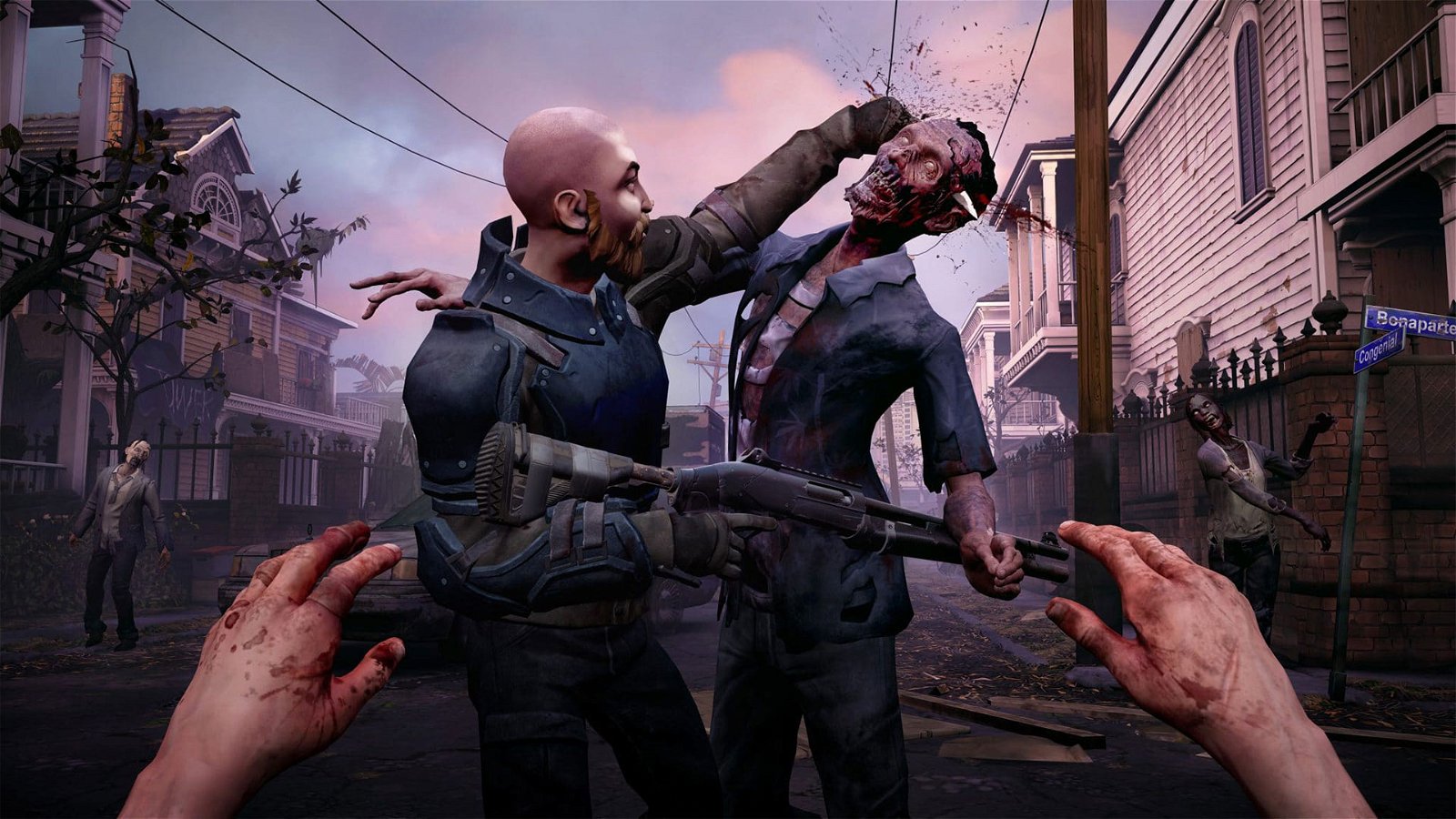 It’s been more than a year since Skydance Interactive brought a slice of The Walking Dead to VR. I still stand by my 8.5 review from February 2020, which gave Saints & Sinners credit for delivering a pure survival experience. It’s hard enough to spend 10 hours staying fed and energized. Zombies and crazed survivors didn’t help with the day-to-day cycle of exploring. As the dead grew in numbers, so did The Walking Dead’s stakes for thriving.

Unsurprisingly, most players like myself have had more than enough time to test our mettle against the undead. Its lengthy story mode might have ended. But this sadly left a huge void to fill for the Aftershocks update. The post-apocalyptic New Orleans suddenly felt like a place of wonder. Thanks to Skydance’s latest offering of missions, VR players finally have a reason to dive back in.

It’s worth noting I already reviewed The Walking Dead: Saints & Sinners last year. The VR first-person shooter aged incredibly well through updates which dropped after publishing. Jumping back in, Saints & Sinners still delivers a satisfying zombie killing experience. VR players have to do all the work – including plunging weapons into skulls. Shooting big and small weapons, before they break. Then screaming and pushing zombies who want nothing but to num-num (eat) you. It’s also a full-length RPG which lets players make or break alliances with others. This is still a definitive Walking Dead experience that other VR games failed to top.

Major DLC, like the Meatgrinder update, added a horde mode, letting me slay endless waves of walkers to my heart’s content. Aftershocks comes as the second major DLC in 2021, much to my excitement for a real story expansion.

But my gripes with this DLC come from loving the original campaign a bit too much. Aftershocks doesn’t exactly offer that same depth, carried by some engaging characters. They were believable enough to make me question my day-to-day supply runs. Mixed with some massive conflicts and choices, I was pulled into a drama of my own making. The Walking Dead: Saints & Sinners took notes from the AMC series for some human elements. It’s definitely not like the less-received Onslaught VR game by Survivors. Despite the influences, Saints & Sinners’ zombies were overshadowed by deep survivor encounters.

Flash forward to the Aftershocks update – essentially a post game expansion which picks up after things hit the fan. Without spoilers for the uninitiated, players absolutely left New Orleans in a worse shape than before. This means the semi-open world isn’t as packed as it used to be. Aftershocks put me back in an emptier world than before. There are still plenty of walkers, Tower mercs and Reclaimed acolytes. But they serve as one-dimensional enemies to hinder players from their supply runs.

I’ll admit Aftershocks suffers from a lack of cohesion and pacing. Players are simply given a chance to revisit New Orleans’ neighbourhoods in scavenger hunt fashion. The DLC serves as the post game, just to add these low stakes objectives. Here’s where Aftershocks feels more like an in-game event. Much like Fortnite or Warzone, players are given new things to do. But it’s grounded in The Walking Dead’s elements for hunting and gathering.

The Walking Dead: Saints & Sinners Aftershocks still plays to its strengths. Players are going on pure supply runs, which drive the entire DLC’s five to six hour run. Those who especially love collecting resources have plenty of things to do until the next update. Like the campaign, players are also rewarded for starting this new hustle. Without a returning cast to push a story forward, resources begin to speak for themselves

Players still get chances to upgrade their hideout. From the leftover recipes for weapons and resources, Aftershocks effectively fills in the gaps. These new caches are abundant with resources that were harder to find in the campaign. In a way, Skydance prepares players for an even bigger battle to come. But this doesn’t really come into fruition by the end. By finding some secret keys, each one leads to a new story nugget. These are smartly incorporated into the existing world.

Skydance has also made the post-game more challenging. Nearly every NPC is made up of enemies. Players never feel safe in a much scarier New Orleans. This quickly jump started all of my reactions, aim and backpacking skills laid dormant for over half a year. In other words, everything wants to kill you in Aftershocks. The world is bleaker than ever, without allies which aided players in their completed journey.

In a slight twist, Aftershocks flips some areas of a map around. A few familiar halls in schools, facilities and other dark buildings are cordoned off. I’m still struggling to see in the terrifying void of uncertainty under Aftershock’s indoor levels. A nice addition comes from explosive traps and noisy tripwires. But it takes one knife to render this DLC feature useless. I’ll even admit to deliberately setting off traps, clearing myself a stress-free path through a building.

The Walking Dead: Saints & Sinners Aftershocks DLC starts to blur the line of offering “more game” for players. One way comes from other undead games before. Resident Evil VII offered some post-game DLC of their own. Through a few story-based DLCs, players got original story nuggets before and after Resident Evil VII. The Baker mansion was the same, but players got a new perspective through the eyes of Chris Redfield and Zoe Baker. Same zombie shooter. But with DLC that offered a different way to play. In turn, there was “more game” through a quality story with gameplay twists.

Marvel’s Avengers might be a console game, but its post-launch DLC gives VR titles notes to take. The recent War For Wakanda is an overdue expansion like Aftershocks. But only one free update checked all the right boxes. War for Wakanda is still derivative of the Avengers game. Players are still doing much of the same. The difference lies in crafting a brand-new environment to explore in Wakanda. Then offering Black Panther as a new hero, with moves that add a twist to conventional gameplay. Clearly, the story needed some work. But Crystal Dynamics still met DLC standards with an original plot that expanded the entire Avengers narrative forward.

See where I’m going with this? Aftershocks presents a different kind of post-game after delivering a stellar story. It doesn’t strike me as having the same quality or pieces. Resident Evil VII and Marvel’s Avengers noticeably framed DLCs as a “game within a game.” But The Walking Dead: Saints & Sinners scratches the surface for something refreshing.

Aftershocks only gives “more game” without an added perspective DLCs should offer. It’s simply doing more of the same through looting caches. Where quality expansions would add something new to the design or gameplay, The Walking Dead holds back. Heck, there aren’t even new weapons or reasons to collect resources. Instead, the looting and collecting comes for the sake of it. As a DLC, Saints & Sinners remains without a twist. Or a real character presence to bring “the Tourist” back into action. After a long wait, players deserve some story elements which are still in the game’s pipeline. But unfortunately, it’s delivered in pieces which don’t really come together until the end.

This doesn’t go without saying The Walking Dead: Saints & Sinners Aftershocks proved me wrong in surprising ways. It deserves credit for setting up the next big thing. The free update contains plenty of secrets players might be shocked to discover. Skydance cleverly rebuilds the world as zombies gain dominance in New Orleans. Aftershocks uses the hub’s radio for some new dialogue, which leads to horrifying discoveries. When players eventually reach their caches, they soon find they’re no longer alone. Wall writing, fresh corpses and new crime scenes start to appear. Aftershocks restarts the tension and horror elements for the most experienced players. It’s scarier knowing New Orleans is empty.

Players might start to feel unsettled by this unseen presence. Much like the Rat Man in Portal, there are signs of life in a barren world. Without spoilers, Saints and Sinners teases it for another upcoming DLC. But here’s where I hope Skydance focuses on a true story expansion which reveals new characters. These would open up new stories for Saints & Sinners. Aftershocks feels like a reorientation for players who retired from the journey. It’s the setup for another romp which hopefully resurrects a quality story.

The latest DLC feels like a massive supplydrop of medicine, ammo and materials. Enough to fight an even bigger threat than New Orleans’ remaining inhabitants.

The Walking Dead: Saints & Sinners earned our Editor’s Choice for VR Game in 2020. It’s available with the free Aftershocks update on all major VR platforms. The latest Aftershocks DLC is unlocked after beating the main storyline.