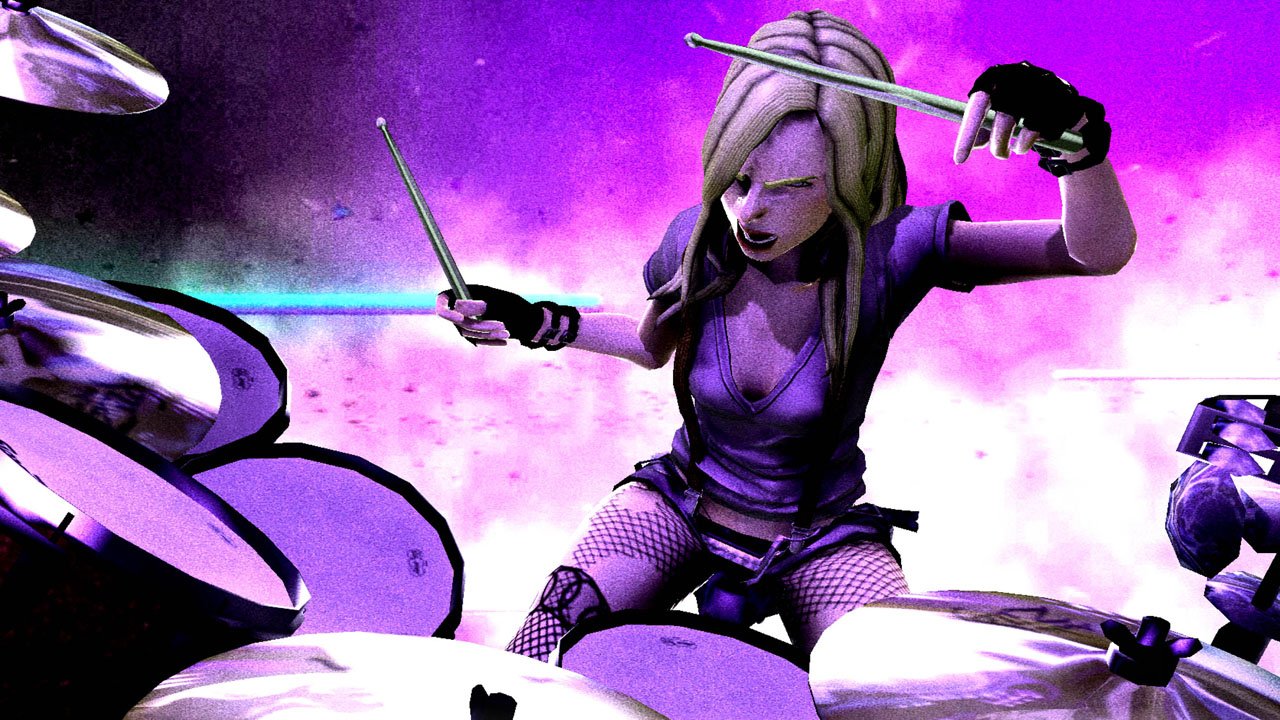 While we still have no official confirmation from Harmonix itself, the surveys, the anonymous sources and the rather deliberate selection of songs arbitrarily made available on Xbox Live and PSN all lead to one likely conclusion; Rock Band 4 is coming. That’s great news for the fans, the younger players that somehow missed out on the craze a few years ago and, more importantly, anyone that still enjoys actual local co-op multi-player. However, with a new Rock Band title comes concerns, especially considering how the rhythm genre flared out in the last generation of consoles. So what can Harmonix do make sure that when RB4 makes a comeback, it’s here to stay? Here are five things—two of which are no-brainers—that would help RB4 to work its way into the hearts of fans and stay there.

This one, especially for the hardest of the hardcore Rock Band fans, is a must. There are nearly 1700 songs available over the life of the RB franchise at an average of $2. If you bought all of them (and I’m not judging if you did, but my GOD, man…) that amounts to $3400 worth of songs sunk into RB1-RB3. I myself went nowhere near that crazy, and I’ve still got a couple of hundred songs. Now, if this were music that you bought digitally, it wouldn’t matter what platform you listen to it on, it’s yours to listen any way you want, any how you want. But consoles tend to be a more finicky place when it comes to specific software on specific platforms. If Harmonix wants to keep fans happy, they won’t let that investment go to waste and say “Yes, we know you already bought the Tenacious D collection, but if you want to play it on RB4, you’ll have to buy it again.” That’s a guaranteed rage response right there. Especially for those people with $3400 worth of songs.

This is another no-brainer, and is arguably interchangeable with the first in terms of importance to fans. Those old guitars, drums, microphones and even keyboards are taking up space in closets and basements all over the world. Some of them are major investments, like the Ion drum kit that actually doubled as a real synth drum set, or the RB3 Pro Guitar, which was an ACTUAL guitar. While it’s true that many people have cleared out instruments over the years as they abandoned the rhythm craze, many others have held onto their gear. I myself, for example, still have a Starpex “Peak” 3

party guitar that’s an actual, full size wooden guitar that beats the standard plastic instruments by a country mile, I can’t play RB games anymore without my beloved Starpex. If Harmonix tells people “Yeah, we know you spent hundreds of dollars on this stuff before… but you’ll have to do it again,” that’s going to be a hurdle some fans might not be able to overcome.

Of course, Harmonix WILL have to sell new instruments to cater to those people that either got rid of their gear, or are new to the franchise and never owned plastic instruments. But there’s a reasonable compromise to be made here. Harmonix can offer an olive branch to the existing fans by saying “Yes, your old gear will work with RB4. BUT, we have these new features, like, say, a wah-wah pedal for guitars, that will only work with new gear.” That’s probably an arrangement existing fans can live with. That way, if they don’t care about the drums, but really, really want that wah wah pedal, they can keep their drum set but splurge on the new guitar. And honestly, telling people their old USB microphone is somehow NOT compatible with a PS4 or Xbox One is just plain heartless.

Rock Band As A Platform Not An Annual Release

The heart and soul of Rock Band is, unsurprisingly, the music. It’s not the peripherals, the graphics, or competitive multi-player that keep people coming back. For some it’s being a child of the 80s and finally getting play “We Are The Champions,” or being a millennial and singing “Poker Face.” As a result, the Ubisoft/Activision business model of an annual release isn’t necessary. Rock Band doesn’t have a new story to tell, or need Kevin Spacey to make a performance capture appearance.

Harmonix could make things much more cost efficient and fan friendly if they release Rock Band as an initial investment that simply keeps growing thanks to DLC. People will buy new songs of course, but Harmonix could also make new modes optional. If someone isn’t interested in competitive multi-player, they don’t need to buy that add-on. If a new graphics engine comes out that makes the custom band look even better, people can “opt in” to buy that, or ignore it if they don’t care about how the background performance looks. If a new plastic instrument becomes available, sell it as an add-on, not a brand new retail disc bundle. In other words, Rock Band 4 doesn’t have to lead to RB5 and RB6. It could simply become Rock Band and grow as its owner dictates.

This one is a bit more technical, but for the hardcore fans, it’s an absolutely essential feature. Back in the day, when people played rhythm games on CRT TVs and the sound came out of the TV speakers, latency wasn’t an issue. But in a digital world with a signal running through an HDMI cable first into an amplifier, and then into a TV which is LCD, LED, OLED or plasma, significant amounts of audio and video latency are introduced. The end result? What you strum, sing, or beat on a drum isn’t necessarily synchronized with what you’re seeing or hearing on screen.

Rock Band had some calibration tools to handle this, but they weren’t very comprehensive. New instruments introduced a light and audio meter to try to automate the process, but even these were hit and miss. There’s nothing more frustrating than knowing you hit a note in time to the music, but the game doesn’t realize it because the settings are off. It’s not so much of an issue with slower songs, but insane drum or guitar solos where notes are played by millisecond… it really matters then. The average player, just messing around for fun, isn’t going to worry about this breaking a streak on “Green Grass & High Tides” or “Freebird,” but for the people playing to score and compete on leaderboards… this stuff matters a lot. Now, more than ever, there are latency issues with modern TV home theater systems. Harmonix really needs to tackle this issue head on.

It’s worked for movies, music, and even games, so why not music games? This is simply giving your customers more choice, so no one can protest that they’re being “forced” into anything. Some gamers will simply buy whichever songs they like and be content with that. Others, however, are digital hoarders and want everything. Giving people a subscription option to play ALL Rock Band songs for an ongoing, monthly rate is simply one more way to enable fans to enjoy the game. Not everyone is going to go for this, of course, but for people that want to play 1700 songs without paying over $3000, here’s one way to do it.