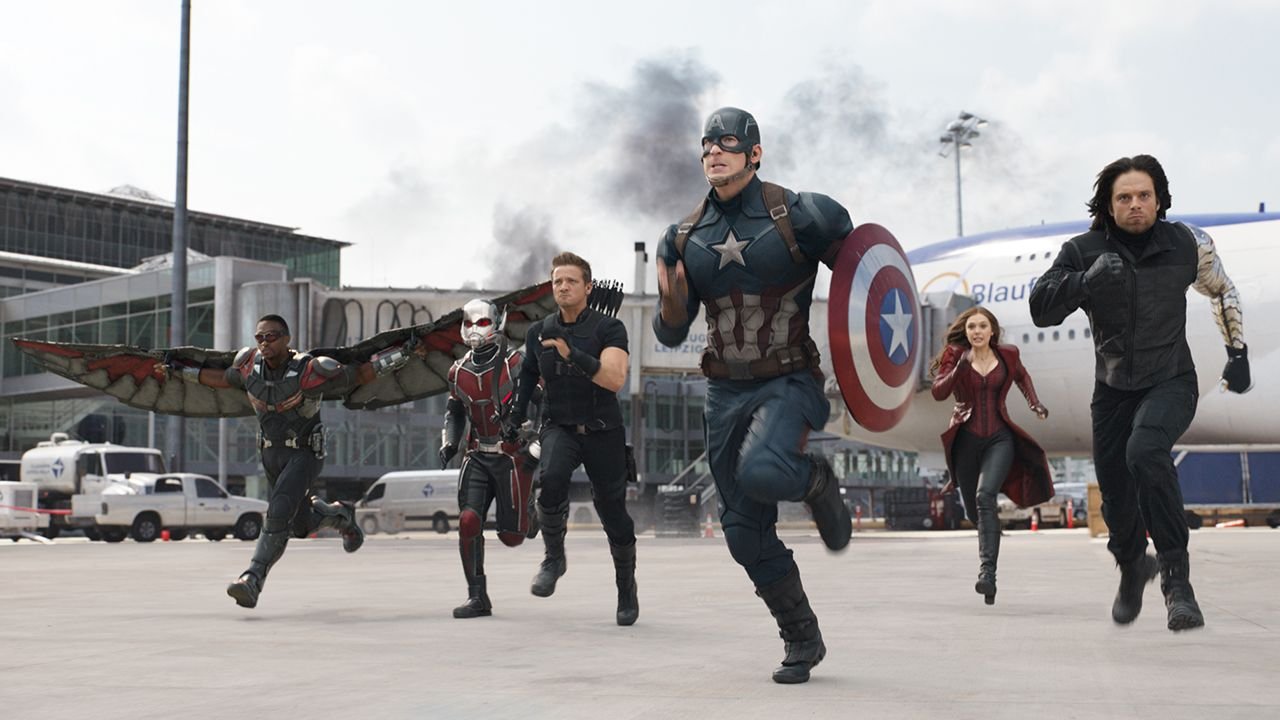 This week, the folks at the Marvel movie factory are hoping that 13 is their lucky number with Captain America: Civil War. The massive blockbuster represents the culmination of 8 years and 13 movies worth of episodic storytelling that transformed summer movie season into a grand comic book movie experiment. It all began with a calculated risk when Marvel decided to bankroll their own movies based on the properties they had left that weren’t sold off to other studios. There were some hefty bank loans and a distribution deal with Paramount involved and if things went poorly, it could have been a big problem for the entire Marvel empire. Obviously, that didn’t happen. Instead under the watchful eye of Kevin Feige, Marvel delivered a cinematic universe so endlessly entertaining and successful that all other studios in La-La-land are struggling to catch up.

A few years ago, no one would have imagined that Captain America 3 could potentially be the highest grossing movie of a given year, now that’s practically a guarantee and Marvel is about to kick off the third phase of a master plan that worked out better than anyone could have possibly imagined. To celebrate, we here at CGMagazine have decided to kick off the week with a ranking of all the Marvel Cinematic Universe movies to date, including Civil War. You’ll likely see quite a few of these rankings filling up the interwebs this week. However, ours is the only one that is correct and matters. That’s just a fact. Today you’ll get the first half of our rankings. Tomorrow, the second half. Then on Wednesday, the Civil War review that you’ve been waiting for. Yep, it’s a big Marvel week here at CGM because damnit…these movies are great. And now…on with the countdown.

At the bottom of the list is the redheaded stepchild of the MCU. Released the same summer as the game-changing Iron Man to decent if not earth-shattering success, The Incredible Hulk is a perfectly entertaining little time-waster. It’s essentially a massively expensive episode of the 70s TV series with Edward Norton getting all emotional as The Hulk and Tim Roth growling as the bad guy. It’s amusing and has a couple of nice action scenes (especially the finale that will amuse Toronto resident Marvel fans as they get to see the Hulk fight by The Big Slice and Swiss Chalet locations that apparently exist in Harlem), but there’s little to it beyond those surface pleasures. Norton was fine as Bruce Banner, but his recasting certainly didn’t hurt the character in any way. Weirdly enough, of the two MCU launching movies in 2008, this one got twice the budget because it was considered the most likely to succeed. Oh how times have changed…

Speaking of entertaining yet forgettable Marvel movies, remember this Thor sequel? It’s the one where Chris Hemsworth’s Thor and Tom Hiddleston’s Loki teamed up to fight some goblins in London or something. Yeah, I only vaguely remember any of those things happening as well. This one tops The Incredible Hulk only because the gently comedic tone of the MCU was in place by 2013, so it at least serves up fun thanks to the formula. Plus, Tom Hiddleston’s Loki remains the only truly great villain in this entire universe. So extra points for his presence are deserved.

Yep, Thor again. I’m not a big fan. The Norse god is easily the trickiest of all the MCU heroes to get right. He’s a little limited dramatically and has that Superman problem of being far too powerful to ever feel truly in danger. However, there’s no denying that this movie is fun (even moreso than the sequel). Shakespeare specialist Kenneth Branagh delighted in stylizing on the formal speech of Asgard and delivered a high camp tone filled with winks and nods and knowing silliness that helped sell the dated nature of the character. Plus he cast Thor and Loki to perfection, finding then-unknown actors who have deservedly become stars of the MCU. It’s a fun little romp. Just don’t think about the fact that the movie essentially apes the plotline of the brutal 80s Masters Of The Universe movie once Thor gets to earth. That’s…pretty, pretty, pretty embarrassing. Still, at least this one is an easier watch than its sequel!

Iron Man 2 often gets dismissed as the weakest entry in the MCU and that’s a little unfair. Granted, the film is certainly flawed. Director Jon Favreau may have gotten far more resources for his Iron Man sequel, but he had to spend half of his screen time setting up the next three sequels that would peak with The Avengers and went into production without a finished script. Toss in the instantly forgettable villain Whiplash (which was really just an excuse for Mickey Rourke to growl) and you’ve certainly got a sequel with some problems. All that said, the movie is far more fun than you remember and plays much better once you know what the pay off would be to all of the set up crammed into this two hour exposition factory. Plus, Sam Rockwell is so damn entertaining that he actually steals some scenes from Robert Downey Jr., which shouldn’t be possible according to science.

Ant-Man has the unfortunate distinction of being the only Marvel movie to hit screens amidst a flurry of fanboy controversy. Beloved genre director Edgar Wright (Shaun Of The Dead, Hot Fuzz and Scott Pilgrim vs. The World) quit the project mere weeks before production began claiming ‘creative differences’ with Marvel Studios. Peyton Reed stepped in at the last minute and did a furious re-write with Adam “Anchorman” McKay and star Paul Rudd to make the movie happen. Together, delivered something far better than anyone expected under the circumstances. Paul Rudd stepped up to deliver probably the most purely comedic hero in the MCU, Reed created some amazing 3D images and visual gags, while Michael Pena stole the show and all of our hearts. Sure, the villain is pretty useless and the plot is merely holding everything in place, but Ant-Man is just so damn charming that the flaws never really sting. Ant-Man is a damn delight that should only be improved by a sequel created by folks who aren’t working so heavily under the gun.

The biggest problem with Avengers: Age Of Ultron was Joss Whedon had an impossible act to follow. There was no way to possibly recreate the geeky joy of seeing the first successful cinematic superhero crossover picture. So instead, Whedon decided to make a blockbuster about the Avengers falling apart while also introducing a few new major heroes and tossing in the fan favourite robo-villain Ultron in the process. Like Iron Man 2, Age Of Ultron was hampered by studio demands and the fact that it couldn’t really wrap up longstanding plotlines that were saved for Civil War. Still, to claim the movie is a failure is ridiculous. Whedon delivers some fantastic slam-bang team action, writes snappy superhero interactions better than anyone, and I’ve got a soft spot for James Spader’s slithery take on Ultron (he made for a damn fine villain, which is rare in these flicks). Sure, it wasn’t the slate-clearing Marvel movie game-changer that everyone hoped for, but Avengers: Age Of Ultron is still the type of unabashedly nerdy superhero movie that no one ever could have imagined possible on the big screen less than ten years ago.

What happens when Robert Downey Jr. gets so powerful that he can essentially make any Iron Man movie he wants? Well, you get a snappy n’ sarcastic Iron Man flick in which Downey doesn’t have to wear the cumbersome suit for the middle third and his action movie guru buddy Shane Black (Lethal Weapon, Monster Squad, Kiss Kiss Bang Bang) got to call the shots. The result was an Iron Man movie filled with a distinctly 90s blockbuster sensibility defined by sudden-gear shift action scenes, ridiculous plot twists, and dialogue written almost exclusively in one-liners. Some comic book purists find Iron Man 3 to be a bit blasphemous. As a Shane Black fan, I love that he was able to make a threequel this true to his unique sensibilities (the Mandarin joke/plot is absolutely hilarious and if you think it was possible to deliver that dated racial stereotype faithfully in a contemporary blockbuster, you’re insane). Sure, it’s not the best Marvel movie. But it’s the only one that’s seasonally appropriate to watch around Christmas and given all of the casual snark and violence in the studio’s lone X-mas Marvel movie, I can’t help but be tickled by that face.

That’s all for now folks. Come back tomorrow for the best of the best…which you may have noticed includes the latest entry in the MCU.