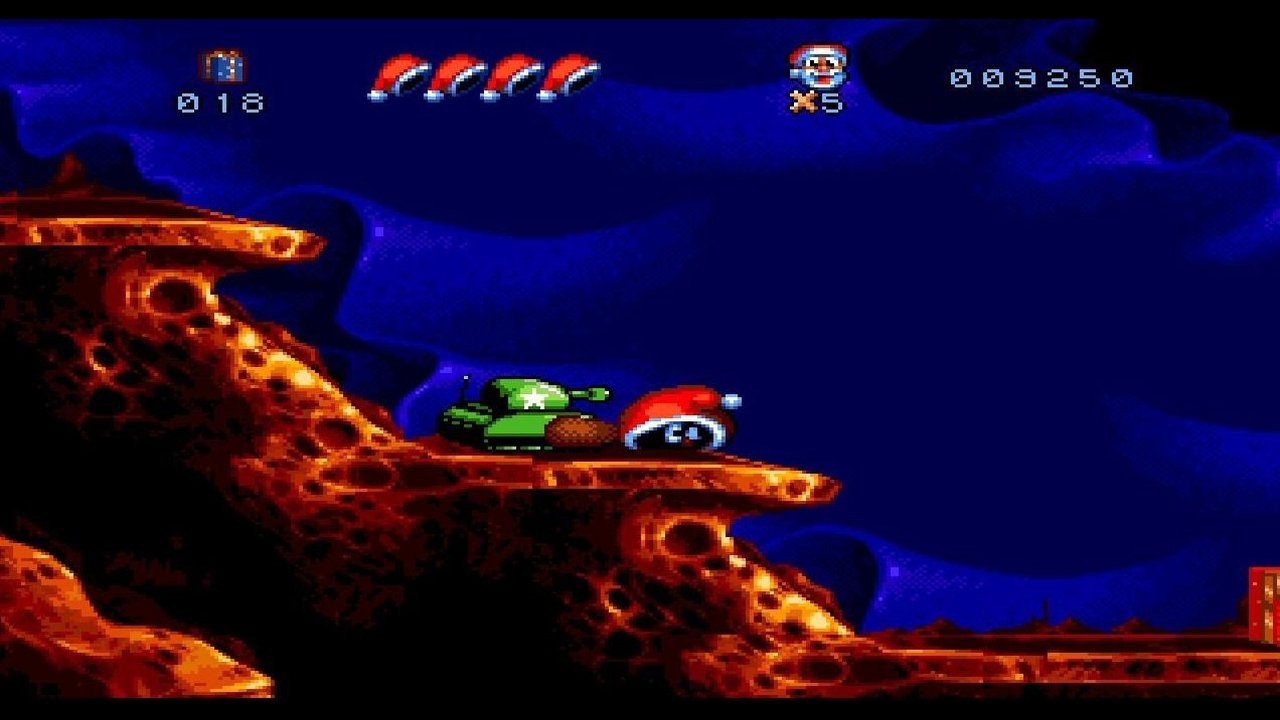 With the number of games that have been developed on the strictest of time lines in order to ensure an early holiday release date it’s a little surprising to note just how few of these games are actually holiday themed. It’s even more rare that any of these few holiday titles manage to pull together enough interesting gameplay to provide anything but a seasonal novelty. In fact, reflecting on any and all the Christmas themed games I have played only one manages to still hold a place in my heart. With a great blend of platforming, great music and fun animation Daze Before Christmas manages to stand head and shoulders over it’s peers.

The primary plot of Daze Before Christmas revolves around Santa Claus being forced in to an epic campaign to save Christmas from an evil living snowman and an equally evil mouse. The primary goals are to rescue trapped elves and reindeer, collect presents and eventually to defeat the evil snowman and mouse themselves. While this may seem like a fairly standard premise for a game, it’s the actual execution of the gameplay that really causes the game stand out. As Santa you will find yourself in a world of well designed platforming, a world filled with evil mice and toys gone bad. To defeat them you will find yourself armed with nothing more than the ability to throw snowballs and your own incredible agility (who knew a fat man could move like that?). The idea of having a simple ”jump and attack” may seem a little simplistic at a glance, but when you consider the recharge time on this attack the game does take a certain step up in complexity. Many of the evil toys, such as jack-in-the-box and several of the creatures move quite quickly and often vertically. Killing off these enemies while on the move often comes down to either quick reflexes or expert timing on your snowball attack. Reflexes and timing are of course the foundation of any good platforming and carrying over this skill set in to the actual combative elements of the game does lend it a certain sense of cohesion and flow.

As you progress through the game you will also find wrapped presents scatted through-out the levels which can be opened by way of hitting them with your snowball attack. These presents will either contain elves, enemies or one of the games power-ups. These power-ups include Santa hats which represent health, checkpoints and the occasional flame, which converts your snow throwing ability to a fireball, this fireball ability is necessary to melt ice in order to rescue reindeer or to damage the evil snowman.

The most interesting power-up in the game however, the coffee/tea cup, will not be found in these presents. Picking up the coffee/tea cup brings a profound change over Santa Claus, turning him in to the distinctly evil looking Anti-Claus. His suit turns blue, his skin red and devil horns suddenly sprout from his skull. Beyond the humor involved in this Satan Claus, the change actually adds a great deal more variety to the gameplay. While in his Anti-Claus form Santa is invincible and will not take any damage from enemies. The trade off is, however, that he also loses the ability to throw snowballs or fire as his generic attack reverts to beating enemies over the head with his sack of toys. This has several effects on the actual gameplay, most notably the sack attack will not allow players to open the presents found through the levels, many of which contain elves for rescuing, Santa hats and checkpoints. The loss of the ability to use the fire based attack also means that Santa can no longer melt the ice walls that imprison the reindeer. Finally, this change also prevents the player from collecting the presents dropped by defeated enemies. A factor that comes in to play later in the game when you encounter a between level mini-game revolving around dropping these collected presents down the chimneys of various cities around the world. Even beyond these effects on gameplay, the inclusion of this feature just adds a certain feel to the game, a little added touch that you just can’t quite put your finger on. It may be the extra animations or the additional music, regardless, it just adds a certain spice and variety to the game.

When you combine the more than solid gameplay presented in Daze Before Christmas with the smooth, colorful visuals and perfectly chosen music, it lends the game the feel of a well planned, AAA title from beginning to end. Although the game may be somewhat shorter than what you’d normally expect, I know while playing it I certainly assumed it was a relatively large budget release, that it was given every benefit and advantage a game such as Ristar would be granted. Accourding to Daze’s programmer, Carl-Henrik Sk√•rstedt, however, this may not have exactly been the case. In fact, when you look a little deeper in to the development work, the story behind Daze Before Christmas begins to shape up more like a tale of a talented and creative team overcoming adversity.

“The project was more of a contract, based on something a person at Sunsoft had come up with. I was told there was a plan somewhere and something about a kitchen with an oven that was overflowing with dough for example, but as I never actually saw the original document I don’t know what it contained. But as far as the planning and design for the game there was none, most of it came together anyway. I think the team, having very little actual game industry experience, really was one of the best I ever worked with.”

As is the case with many games planned for release around the Holidays, Daze Before Christmas was also subjected to some strict time constraints. I asked Carl-Henrik if the pressure of the release date was felt by the team.

“Indeed, but not directly for that reason. After signing up for Daze Funcom had taken on a shorter project and the one team had mostly moved to finish that up and it was right then that I started working at Funcom unaware of exactly what I signed up for. Luckily a lot of the artwork was in a good place and the Super Nintendo version was actually moving forward but I effectively had just one month until alpha. In the end I think we actually were on time”

It’s always remarkable, and a sign of a truly great team, when in light of these sorts of these sorts of troubles and adversities a game comes out playing the way Daze Before Christmas does. It really stands as a testament to what the team can do when these sorts of pressures can remain invisible to the end player, when any shortcuts taken or corners cut can be hidden behind the mask of a great gameplay experience. In this case, this effect seems to have been achieved with a focus on certain elements of the game and perhaps simply because the developers were actually able to have fun with what they were doing.

“We always felt that we needed responsive and intuitive controls, and that got a lot of attention. As far as the programming went we were always looking for elegant solutions which was a lot of fun even if it didn’t exactly add anything to the game, we did tend to put some poetry at the top of source files for example.”

The presentation for the game also added a great deal to the fit and finished feeling,

“I think the Animations and Backgrounds really worked well, and the musician really pulled off the Christmas spirit.”

In spite of the teams brilliance in bringing all of this together despite and disadvantages they may have faced, sadly, due to financial pressures on Sunsoft around the time of Daze Before Christmas’ scheduled release, the game saw an incredibly limited run of production. Even if you were among the few aware of the game at it’s time of release, actually finding it on a shelf nearly anywhere in the world was no easy task. In fact, according to Carl-Henrik even the developers had trouble squiring a copy.

“Sunsoft actually told us that they couldn’t make the cartridge production payments to the manufacturer so they couldn’t send us a copy of the game so they sent us a press preview copy. It wasn’t until about five years ago that I found the game on eBay that I realized they released it anyway.”

As a result, today both the SNES and Genesis releases of the game are considered to be amongst the rarest available for either system.  To this very day it’s difficult to tell in which regions of the world a release of the game actually made it to retail. With the advent of the internet the Genesis release can now be somewhat easily found, as copies do come up on sites like eBay from time to time. Anyone looking to pick up a copy of either release of the game, however, should expect to pay an absolute minimum of $150 for even a lose cartridge. To be truthful I can’t in good conscience recommend paying such an exorbitant amount for the game to the average gamer. Regardless, I must say that for anyone who has access to the game without paying it’s current collector’s price, the game remains a great play through at any time of the year and even more especially during the lead up to the Christmas season.