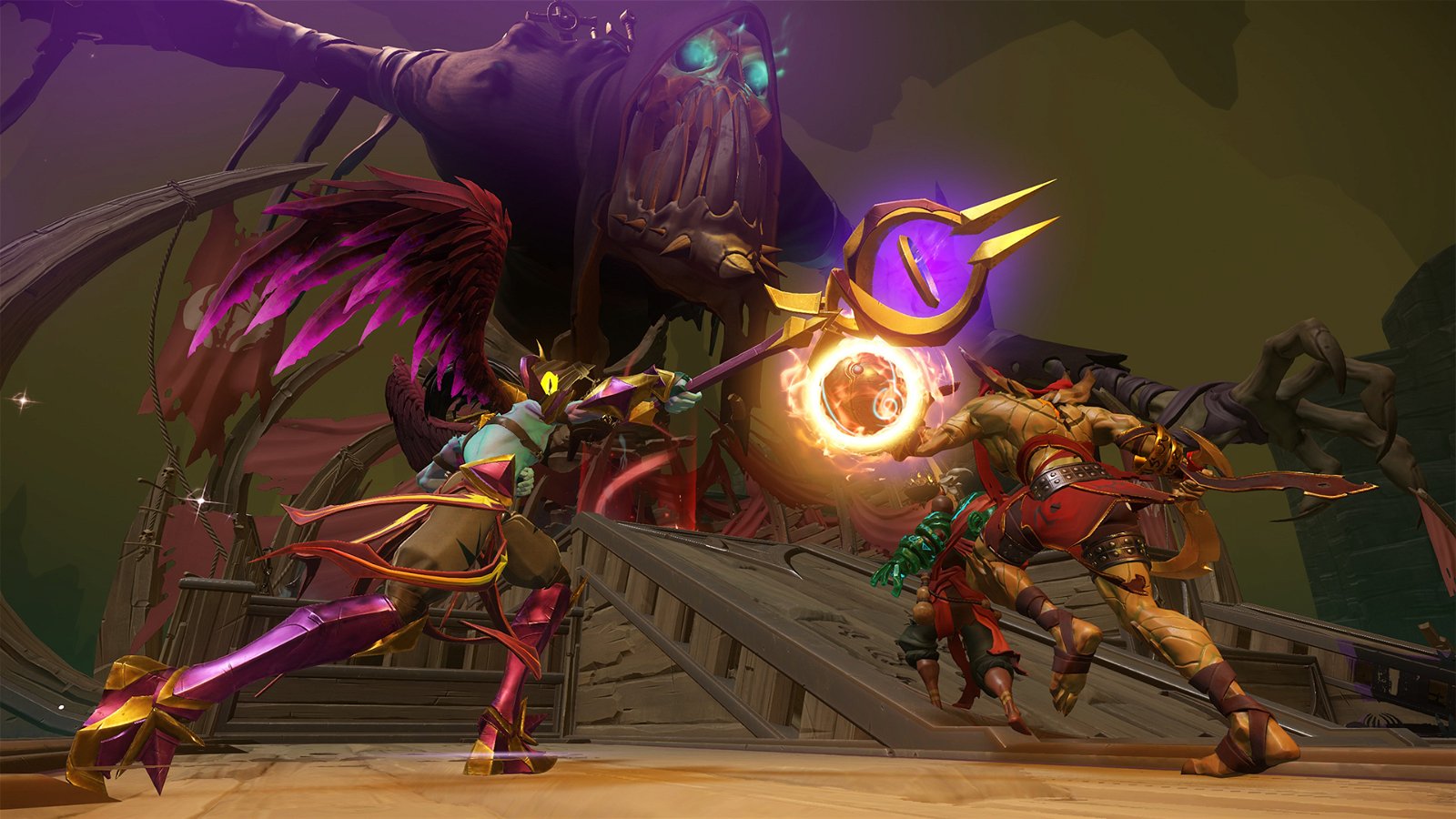 Not content with a film production company and enough money to buy four countries, Amazon has opened a game development studio, Amazon Game Studios, which has been working on their first game, a “fantasy battle sport” title called Breakaway. Combining the gameplay of Pyre with the art style of recent multiplayer shooters like Battleborn and Overwatch, Breakaway sees two teams of five pitted against each other with the objective of throwing a ball from the centre of the arena into the other team’s net. There are 11 announced playable characters organized into four categories: close-range melee fighters, slow but powerful tanks, long-range shooters, and supports. Each character has their own special abilities as well as a buildable, which are items such as turrets and walls that can be built on the map to add a competitive edge.

When one team scores a goal, eliminates all opponents from the map at the same time, or keeps the ball on their opponents’ side when the timer runs out, they win the round, with the demo being best-of-3. At the beginning of the game and in between rounds, players get to spend money they earn from dead opponents on upgrades that can give extra health, strength and speed, among other bonuses. With simple controls and gameplay that is also capable of strategic meta, Amazon’s aim with Breakaway seems to be to appeal to casual players looking for a fun multiplayer game as well as the hardcore crowd interested in its eSports and pro streaming potential.

Streaming is a big factor in the success of a game like this, and since Amazon also owns Twitch, they’re going to milk that integration for all its worth. Features include the ability to commentate matches in spectator mode, play with Twitch followers in Broadcaster Match Builder, display custom stats with Metastream, and “build awareness” with Broadcast Spotlight. However, the addition of these features assumes that this game will become popular enough with streamers to justify their addition, which is a bold assertion to make before the game has even released.

Despite Amazon’s pedigree and the clear confidence they have in Breakaway, it’s difficult to predict how well players will react to another multiplayer title like this. While I did have fun in the three matches I played, the success and appeal of a multiplayer title lives on how the developers support it after release, a factor that depends entirely on sales. We have had no less than three high-profile failures in the past two years that tried to break into the crowded multiplayer arena—Evolve, Battleborn, and LawBreakers—with Breakaway sharing a similar aesthetic with the latter two. In fact, the biggest smash multiplayer success of the year, PlayerUnknown’s Battlegrounds, became so successful in part due to deliberately avoiding the rigid style of games like this. Plus, as Evolve showed, audiences will respond very negatively if a publisher tries to push the eSport aspect of a game before the community even has the chance to evaluate whether it has that worth—and Amazon is clearly shooting for Breakaway to be an eSports contender right out of the gate.

If Breakaway is released with a reasonable price tag, there’s a chance that, with a strong enough push from Amazon, enough people will be drawn in. But considering its similarities to other, already successful games such as Pyre and Overwatch, there is little to no chance that this will survive as a full-priced game. This is a shame, because while I didn’t get a chance to try out all the characters and their abilities, what I played was a sharp and well-balanced game that hit the easy to play, hard to master sweet spot that these titles yearn for. It remains to be seen, however, if Breakaway can live up to its title and break away from the issues surrounding it.