Every year, Call of Duty manages to be one of the top-selling properties in gaming. This is due, in large part, to the love of the multiplayer by a large portion of players. With Infinite Warfare, Activision and Infinity Ward are pushing the multiplayer even further. They’re building on what they have done in past games, while still making it fresh and new. At Call of Duty XP 2016, I was fortunate to get some hands-on time with the multiplayer, and so far it has proven to be both fun and challenging.

Last year in Black Ops III, Treyarch added the Specialists. This enabled players to choose a class that fit their style of play. Each one had a unique payload that made them all feel unique while still maintaining that delicate multiplayer balance. This year, Infinity Ward is pushing this concept even further with Rigs, a new set of customizable classes built around different playstyles. From the fast-moving FTL to the more tank-feeling Merc, there’s something most players will be able to sink their teeth into.

Beyond selecting your Rig, the choice on perks and traits gives that second level of customization to really help players tweak the game to suit their needs. With each Rig having the choice of three different traits and perks, there are 50 different combinations that provide much more variation then would be thought. Payloads are powerful weapons or special abilities that last for a limited time, while traits are persistent enhancements or abilities. It is the combination of these two systems that gives players a character that will fit all the needs for battle.

Jumping into a match, it was readily apparent how the different Rigs would change the flow of a match. Starting off with the FTL, in the Deathmatch mode, I quickly discovered the Rig changes up the gameplay. With the speed of the FTL mixed with the perception trait, I was aware of what was going on around my character at all times. While these traits and perks will not make a great player out of a series newcomer, it ensures everyone that plays the game will have the chance to figure out what works for them.

These Rigs also add a different level to each different multiplayer mode. Moving on from Deathmatch into Domination, the need for a balanced team became quickly apparent. A team built for purely offence or defence will be outmatched quickly by a team with a good balance. Jumping in and seeing there was a need for support and defence, I managed to try out the tank-like Merc along with the balanced Warfighter class. Each proved to be a very different beast than the FTL. The Merc, being able to take much more damage, proved to be invaluable in defending the checkpoints. Meanwhile, the Warfighter and their well-rounded loadout proved ideal for an offensive run.

Alongside modes seen in previous installments, Infinite Warfare adds two new modes – Frontline and Defender. Jumping into the Defender game mode, it was easy to see how it would add a new interesting element to the Call of Duty formula. At first glance, it seems similar to a standard capture-the-flag gameplay mode. But when thrown into the thick of battle, it quickly goes beyond that. Players must hold onto a drone in a hot potato-esque mechanic. The longer you hold the drone, the more points you get. With only one drone on the field, the ability to stay alive while holding the drone is greatly reduced. The full force of the enemy team will be quickly put against you, and it is only through teamwork and skillful maneuvering that you will manage to stay alive. In practice, it was fun and rewarding. While it is not an easy mode to jump into, it’s simple enough to understand, yet very hard to master.

Even with all the changes Infinity Ward have made with this latest installment, a few things remained the same. The fast, vertical parkour style gameplay seen in Black Ops 3, is still alive and well within Infinite Warfare. Players can still scale obstacles, run walls, and generally traverse the landscape quickly ensuring gameplay is still fast and fluid. Call of Duty would also be nothing without the epic Scorestreaks, and Infinite Warfare is no different. Infinity Ward have kept the epic feel seen in past games, while ensuring they have that futuristic warfare feel. From the UAV and Counter UAV that have been seen in previous games, to the new monstrous R-C8, a massive robot that can be used for defence or act as a manually controlled weapon, Infinite Warfare manages to raise the bar on exciting multiplayer battles.

As with any new multiplayer game, the real test will be when it is in the hands of players in the wild. That being said, Call of Duty: Infinite Warfare is shaping up to be an exciting installment in the series. The team at Infinity Ward have managed that delicate dance of making something new, while meshing it with a formula people love. There is a lot to love with what has been showed off so far, and it will be interesting to see how the final product will turn out. 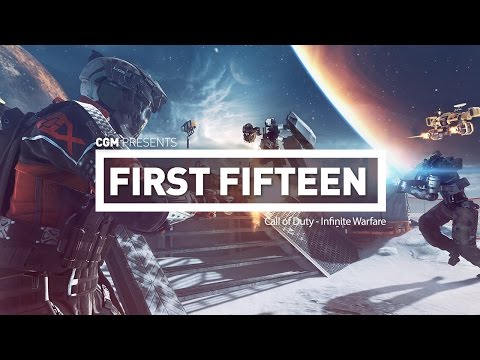 The Call of Duty: Infinite Warfare multiplayer beta will be launching October 14th on the PlayStation 4.