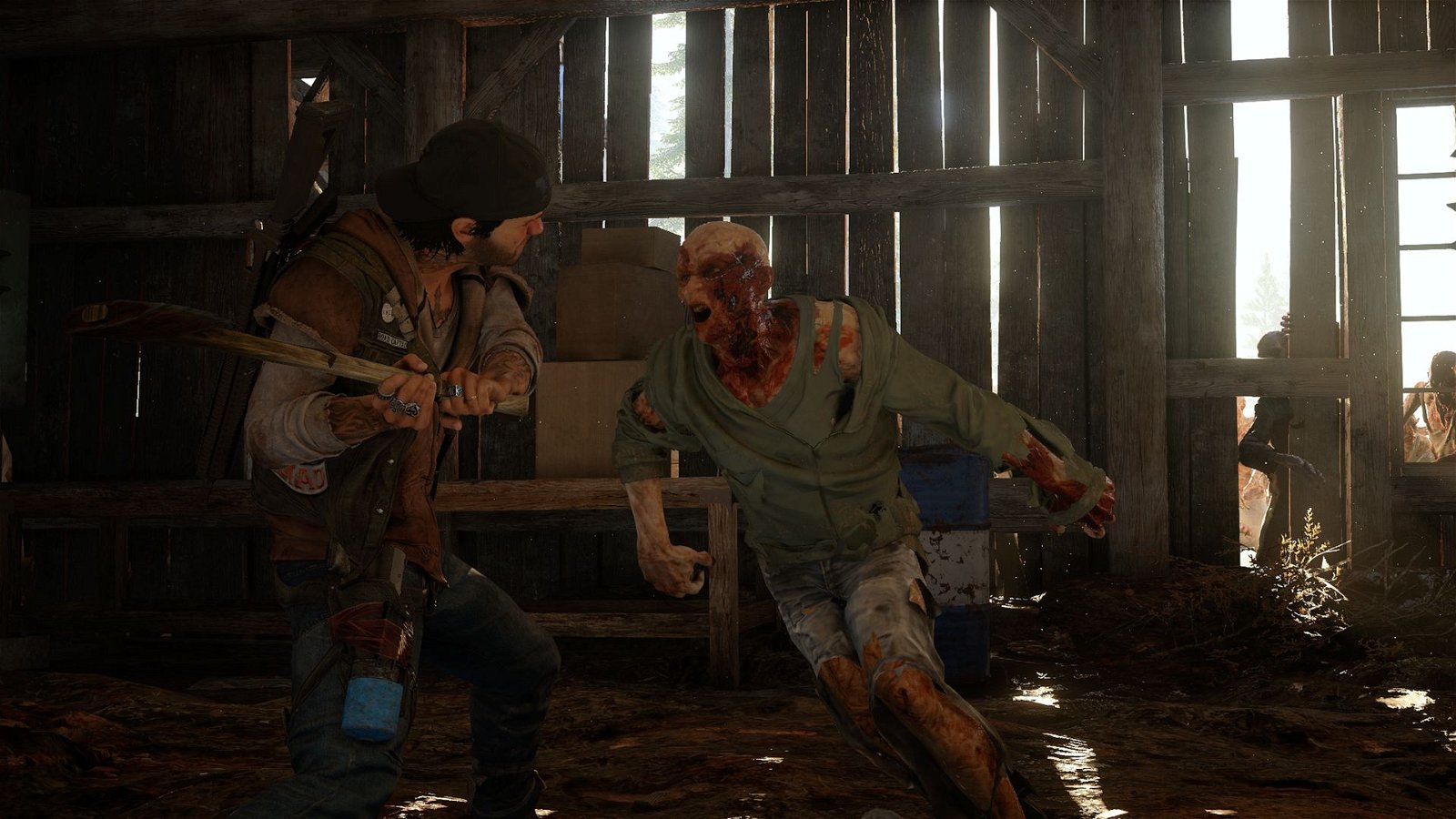 It’s hard to get excited about a zombie shooter in 2016, and I admit that the “Walking Dead meets The Last of Us” vibe in Days Gone left me feeling like videogames are clinging on to a worn narrative beat.  “Biker drifter with a sad-clown past survives open-world zombie apocalypse” sounds more like an Ubisoft parody than a legitimate concept, but hordes of zombies are probably the best pretense to show what makes Days Gone fresh: impressive herd AI and interactive environmental attacks.

If you’ve never heard of Days Gone developer Bend Studio, you’re not alone.  Bend previously made games like Uncharted: Golden Abyss and Resistance: Retribution, which were two portable spin-off titles. Is it possible that Days Gone began as a Last of Us spin off before Sony demanded a change?

PlayStation’s behind-closed-doors Days Gone session at E3 2016 was an extended, playable version of the press conference demo. It did show off some different things even though it was the same abandoned sawmill map.  Two dudes who looked like they hadn’t showered in a decade still got into one of those ridiculous personal fights you see in The Walking Dead, which of course led to noise, which – of course – caught the attention of the zombie horde. This is where things actually got interesting.

Days Gone throws hundreds of zombies at you in a fast-moving stream.  Based on the demo, you’re given a lot of ammo, but you still have to reload, and I can see how exhausting a clip at the wrong moment could spell doom.  The intended way to play the game seems to be is for the player to use areas of the environment to their advantage. There are log piles that can be collapsed, construction equipment that can take out zombies, placed C4 charges and so on. All this evens the odds between you and a sea of the undead.  Environmental attacks also result in some delightfully gory kills, like one in which a zombie’s head met a stationary saw blade.

When the zombie horde encounters an obstacle, the individual zombies don’t all react the same way.  They separate in several divergent directions.  Some correct immediately, while others stand there confused.  Similar things happen in response to explosions or fire. Some zombies drop right away, others take a while to die, and some survive the flames.  This leads to combat that’s fast-paced, exciting, and tactical – you need to keep moving because there are so many enemies, but you need to think about how the zombies will react to the environment.

Gameplay is definitely going to be the selling point for those like myself who have absolutely no interest in another zombie franchise.  However, I can see the appeal in zombies for Walking Dead fans regarding the motorcycle-riding protagonist. The bike serves as a method of transportation and an extended inventory around the open-world map, but let’s face it: the big selling point for this type of character is playing out fantasies of being Daryl Dixon.

I also noted hints of controversial content in Days Gone, and this has me intrigued.  The first zombie the Darryl clone encounters appears to be a zombie child, and the main character motivation seems to be a dead female love interest, so this gives me hope that Bend Studios aren’t at all worried about the disapproval of gaming’s growing politically correct crowd.  Am I thrilled that it’s yet another dead wife/girlfriend?  No.  But I’m glad that Bend is telling their story, instead of trying to cater to a faction of players dissatisfied with anything other than a polyamorous pansexual woman.

Many people like zombie fiction because it’s the ultimate horror: a person’s body existing in a gradually decomposing state after their consciousness has been hijacked.  Are they still aware in there and just trapped?  Is it just a shell?  Not knowing this is going to make it more difficult for me to blow a zombie child’s brains out, and I think this is good even though it isn’t pleasant.

Games can challenge our sensibilities and make us question our moral choices in a fictional crisis.  Single player experiences are fun, yes, but they also teach us a lot about ourselves, depending on how we engage.  Despite the groan that escaped me when I realized that Days Gone is yet another zombie game for PlayStation 4, the game shows a small but legitimate potential to give us a zombie experience that, at least from a gameplay perspective, does something new.