Re-assemble for the first time. 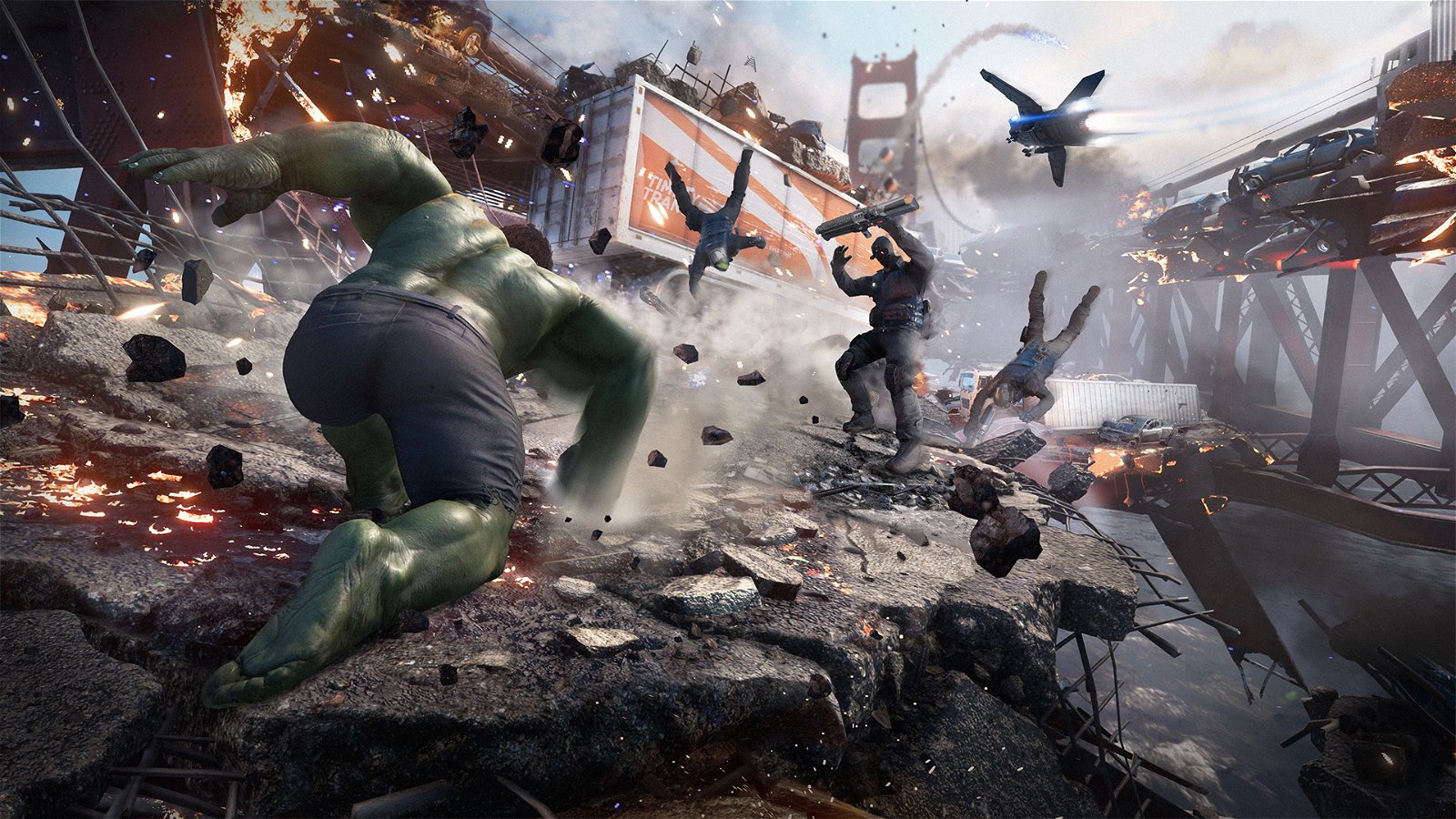 Marvel’s Avengers has a fair amount of pressure on its virtual shoulders, heading into its September release. In many ways, it’s the culmination of a near decade long longing from comic, video game and movie fans, who have been awaiting a AAA Avenger’s game, that allows them to play as their favourite heroes. That coupled with the expectations created by the Marvel cinematic universe, has put the game under a fair share of scrutiny that led to the game being delayed from May to September. After taking part in the game’s closed beta, I can say that Marvel’s Avengers makes playing as a superhero feel distinct and satisfying, even with the existence of some graphical and technical hiccups.

I played just over seven hours of the game’s beta and was able to see a slice of the game’s singleplayer and multiplayer offerings. Narratively, the story kicks off on Avengers Day with the Avengers fighting against a terrorist threat, which leads to an explosion going off and the presumed death of Captain America. The fallout from the explosion changes the body chemistry of certain people within the blast radius, giving them superpowers and the classification of Inhuman. From there, the story flashes forward into a world where the Avengers have disbanded and scientific research agency AIM is trying to find a cure for the Inhuman’s powers.

The beta was split into three distinct segments: the prologue, which was shown off at E3 2019, a single player slice starring the Hulk and Ms Marvel, and the multiplayer centered WarZone missions. Of the three, the single-player slice was the most engaging, as it featured a wide assortment of enemies to defeat, which culminated in a heavyweight bout of a boss fight between the Hulk and the aptly named Abomination. The single player takes place after the fall of the Avengers and Ms Marvel/Kamala Khan and the Hulk/Bruce Banner share an engaging dynamic. Bruce is notably changed by the events of Avengers Day and is hesitant about returning as a superhero, while Kamala is the polar opposite, and is beyond excited to be working alongside Bruce. She is both a fan of the Avengers and a fascinating superpowered being in her own right, and the dichotomy of the two character’s personalities parallel nicely.

The multiplayer takes the form of WarZones, which are missions that involve a team of Avengers being deployed at various hotspots around the world. The demo featured 9 missions across 3 locations which are the Pacific Northwest, Utah Badlands and Helicarrier. The first two play similarly and involve moving through off waves of enemies, destroying nodes and capturing and holding control points. They’re mostly indistinguishable from one another and are a bit bland as a result. I don’t remember much of any of the set pieces or enemy implementations in particular and that’s unfortunate for what is a major multiplayer component of the game. That being said, it was a joy to fight hordes of enemies together with others online. Sending a cluster of foes flying with your Hulk Smash, into the waiting arms of a 20 ft. tall Ms Marvel is a whole lot of fun, and the multiplayer serves as an energized sandbox for the various Avengers to pummel their way through. The Hellecarier distills the combo chaining fun into a wave-based survival mode that is a great way to get comfortable with the various Avenger’s playstyles.

One of the most talked-about aspects of Marvel’s Avengers, when it was first revealed, was its graphics and character models, and they’re still a bit of a mixed bag. After so many years of Avengers films and those actors being the face of the characters, it makes sense that there is some mental dissonance seeing a different looking core group in this game. I found that that strangeness only lasted for the first hour or so, and then I was able to buy into the characters’ designs and the interpretation of these characters. Unfortunately, their models don’t always look great in-game, with various lip-sync issues and slowed performance when fighting against a large number of expressive enemies. With over a month left until release the graphics and syncing issues could very well be addressed, but for now, they’re a little concerning. It’s also worth noting that the game was originally scheduled to release in May of this year before being pushed back to September 4th.

The saving grace for Avengers and the reason why it’s a game that I am looking forward to experiencing more of is that it feels good to play. The combat is fast and fluid and works on a combo-based system that rewards chaining hits together and momentum-based fighting. The hit detection is slightly forgiving but in a way that rarely makes you feel like you missed a punch that you should have hit. This is important because several enemy units require specific movement and damage to defeat them. Certain A.I.M units have energy shields in front of them that require you to break with a heavy attack, others require you to vault over them at just the right moment, while others teleport from location to location and require a well-aimed ranged attack.

Fittingly, the best part of the Avengers game is the actual Avengers characters. During the beta, I was able to play as Hulk, Ms Marvel, Black Widow, Iron Man, Captain America and Thor, and they all have distinct power sets and movement abilities. The Hulk is a force of nature that relies on lumbering jumps and knockback damage, in addition to sheer brute force. He’s the character that I played most as, and it’s remarkable how well the team at  Crystal Dynamics and Eidos Montreal were able to translate his physicality into the game. Ms Marvel is a faster, more floaty character who uses her stretching abilities to swing quickly to high places and fight enemies with ranged melee attacks. Most importantly, her grapple causes her arm to grow and stretch in a way that looks like those jelly hands that stick to surfaces, except unlike those hands, hers don’t fall apart after 10 minutes.

Speaking of 10 minutes, that’s the amount of time that I got to play as Thor and Captain America combined, as they only show up in the short prologue chapter. Still, they managed to make an impression with Thor being a beefy but floaty fighter who relies on his hammer Mjölnir to deal ranged damage. As for Captain America, his combat and move-set resemble that of Batman in the Arkham series, except that his only gadget is his shield. He has a significant weight to his punches that are fitting of the scrappy kid from Brooklyn that he is. Black Widow feels somewhat similar to Captain America, although with faster and more acrobatic combos and less power to her hits. She can turn invisible and relies on quick combos and mid to far ranged gunplay in fights. Iron Man is the weakest of the bunch, mostly because he’s got too much going on. He can operate as a brawler, chaining punches with repulsor blasts in a satisfying way. Unfortunately, the same can’t be said for his flight control which is far too floaty and slow to turn. He does well against far enemies but trying to shoot at mid-range feels incredibly stiff.

Progression wise, each character has their own level that goes up the more they are played and the more experience they receive. Levelling up unlocks branches in the heroes skill trees that allow for upgraded abilities and combos. In addition, you can and must attach different levelled gear to each Avenger, and these are available in loot boxes that are scattered around the various levels. This encourages exploration, as having higher level gear and the buffs that go along with them are integral to having a chance against high powered enemies. It does feel a little tedious to go searching for these boxes, but they’re almost always beside enemies which makes it more engaging. The level cap was limited to 15 in the beta and will be higher in the final game.

Much like the comics that it is based on, the Marvel’s Avengers beta has wonderful highs and disappointing lows. The teams at Crystal Dynamics and Eidos Montreal have successfully distilled the Avengers into their most pure form, with each one feeling distinct and enjoyable to play as. It’s a shame that they’re hampered by graphical and technical hiccups, but the fighting system and wacky abilities carry the experience and lead to an overall enjoyable package. The full game is set to release on September 4th with a pre-order beta running from August 7th to 9th and a public beta which goes from August 14th to 16th.