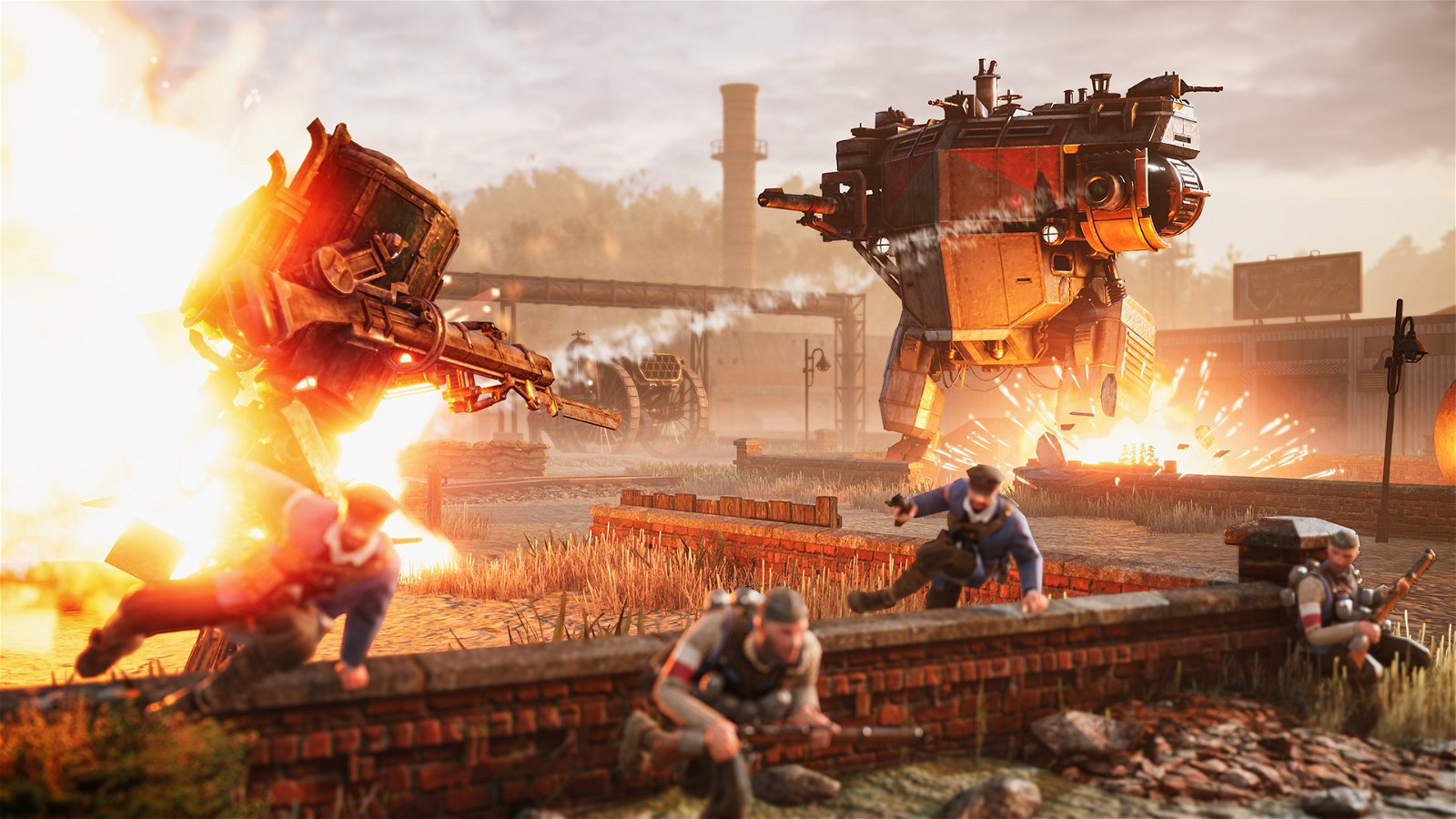 Recently, I was able to sit down with Iron Harvest, an upcoming real-time strategy game set in the 1920+ universe. If you have never heard of that particular setting, it is an alternate history based on the work of Polish artist Jakub Różalski. He later worked with Jamey Stegmaier to create the board game Scythe, also set in this universe, which received a great deal of well-deserved praise. It is important to note that, despite what a lot of folks have said, that Iron Harvest is not Scythe the video game; the digital version of Scythe exists, it’s on Steam and it’s fairly priced. Iron Harvest is its own thing set in the same universe and it deserves to be judged on its own merit. If you’re still confused about the setting then know that it’s a fair dieselpunk style universe taking place in the 1920s (Hence the name) with scrappy soldiers and rusty robots that is largely concerned with the Polish-Bolshevik War. If you’ve ever seen a picture online of rusted out mechs on a farm with a decidedly Eastern European vibe to it, it’s that.

Alright, now that the appropriate framework has been laid, I am happy to report that Iron Harvest is shaping up to be a pretty solid game. Real-time strategy games feel like they’ve come a long way from their roots, with a lot of them turning into these slow-moving games about armies and armadas doing large scale maneuvers, and everything else gets overshadowed by grand strategy affairs and 4X games. Please don’t get me wrong, I love all of those genres deeply, but smaller-scale RTS’s still have their place, even when they aren’t MOBAs. Iron Harvest certainly feels like it has its feet in the faster-paced, more nostalgic end of the pool with hero units and small objective focused maps with a focus on storytelling, more akin to games like Warcraft than anything in the Total War franchise.

That’s not to say that Iron Harvest is a relic of bygone days, either. There are a number of interesting a welcome mechanics here that I can’t say I’ve seen in other games from the genre. Units can be stacked against cover to give them a level of protection during a firefight, greatly increasing their efficiency and leading to interesting tactical play, and issuing a retreat command will provide them with buffs to their defences as they make their way back home. Unit classes are extremely modular and can be changed by simply equipping them with different weapons drastically changing their usefulness in a given situation. Your standard rifleman can grab a grenade from a downed unit or supply cache to make them grenadiers, which are basically rifleman with a new ability for some area effect damage, or they could grab a machine gun, upping their damage while lowering their range of fire. They can even grab a shovel to become engineers, which are terrible in a fight but can repair robots or build barricades and mines on a battlefield. This reflagging of units occurs on the fly, so you could even do so in the middle of a fight, assuming you could get them somewhere relatively safe before they start gearing up. Iron Harvest is full of these sorts of interesting tactical decisions.

However, there are some spots developer KING Art should shore up before it’s time for a full release. Unit AI is pretty rough, especially when trying to position units against cover effectively. With no indicator of what cover is being moved into, units going into the same space will just stand there shooting back completely exposed, that is if they decided that this incoming fire should be returned in kind. Similarly, the path-finding skills of your armies is a bit lacking as well and could benefit from having an onscreen indicator letting the player know what sort of insane route they’ll take to their next destination. They aren’t huge issues, though coupled with the lack of a pause mechanic it can make shootouts extremely chaotic. Hopefully, these issues will be addressed before the game’s looming release.

Other than that, it’s a pretty enjoyable experience thus far, and I look forward to seeing how things are update once Iron Harvest reaches its release window. There’s still work to do, apart from the AI concerns, some cut scenes were just ugly. It looks like the developers are pushing multiplayer and seasonal play as a focus if the menu is any indicator, which is certainly ambitious to say the least. Overall though, I remain optimistic about this RTS and the interesting world in which it sets itself.