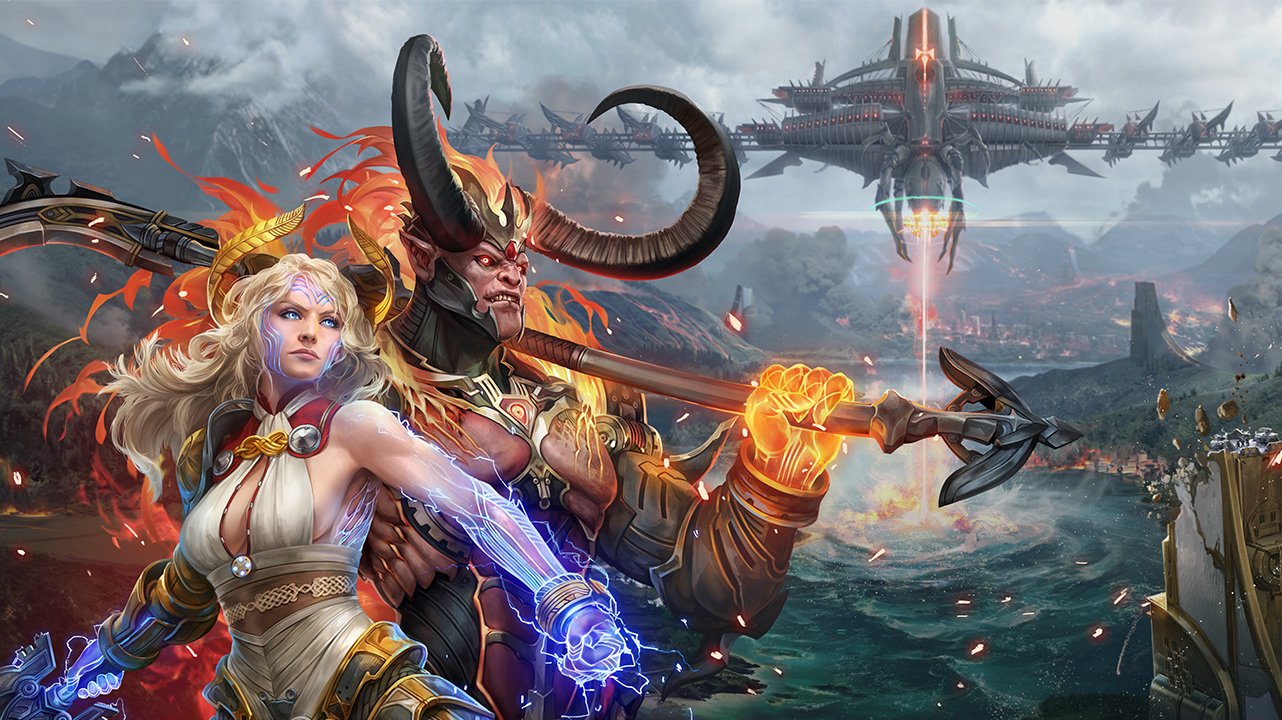 There are very few MMORPGs worth playing on consoles at the moment, let alone those which let you play for free. Skyforge, however, might well be in a position to fill this vacuum as a fantasy action MMO developed by Allods Team and Obsidian Entertainment, arriving on the PlayStation 4 later this spring. I’ve sunk some time into the game’s beta over the past week, and what I’ve seen has left me pleasantly surprised, though I’m not certain how long Skyforge could hold my attention beyond the dozen hours I’ve already spent with it.

Skyforge originally launched on PC in July 2015, so the crucial, often rocky, early stages of the MMO post-launch period is a thing of the past on consoles, meaning newcomers on the need not worry the growing pains that come with adopting an MMO early. In other words, Skyforge is a much better experience than it was nearly two years ago, and not just because of the graphical enhancements and visual overhauls which have been incorporated since then. Last year’s Ascension update, for example, added a new campaign, playable class, battle system, and all sorts of systematic reworkings to the core experience, and that all comes ready to enjoy for those jumping into the game for the first time on Sony’s console.

In terms of its production quality, Skyforge is a mixed bag. The graphical fidelity and visual artistry is surprisingly strong, signalled most notably by the impressive environmental vistas and a liberal colour palette which keeps the optical senses engaged. Though the game exhibits a creative flair when it comes to its art style – clearly influenced by a healthy mix of science fiction and high fantasy –  the sense of personality extends only this far.

Considering the oeuvre of Obsidian Entertainment, known for their work on Fallout: New Vegas, Star Wars: Knights of the Old Republic and South Park: The Stick of Truth, you may be wondering if the studio’s talent for storytelling shines through Skyforge in any way. Alas, the first few hours of Skyforge’s narrative suggests otherwise, going through the motions as another bog-standard tale of gods versus men, and good against evil. What’s more, almost every conversation is victim to a miserably written script, stymied by wooden dialogue and underwhelming voice performances.

To be honest, Allods Team and Obsidian don’t seem too bothered with telling a decent story anyway, and the game appears to expect players to be already up to date about the lore and universe of Skyforge as soon as they start. Considering the mediocrity with which the drama plays out, this actually might be for the best.

Instead, the highlight from my adventures in Skyforge has been, without a shadow of a doubt, the game’s fast and fluid combat. Unlike other MMORPGs, Skyforge plays more like a classic beat-em-up title than anything else, featuring complex combos, enemy lock-on tactics and evasion mechanics. What’s more, the set of 13 playable classes diversifies the proceedings (though the beta currently lets you pick from just three), and each comes rigged with their own unique move sets and fighting styles. All of them complement each other well on the battlefield, too, and the real-time immediacy of the combat allows Skyforge to work more effectively as a co-op game than most of its competitors.

Furthermore, all of this frenzied fighting takes on a whole new level of gratification when the game lets you adopt your “God Form,” which essentially embodies you with the power of an immortal and lets you wreak havoc with gleeful and glorious abandon. While the response of the hotkeys doesn’t always hit the mark when playing with the Dualshock 4, the mundanity of Skyforge’s repetitive questing is kept enjoyable thanks to the entertainment value of every fight. Combat is what makes Skyforge worth playing, the execution of which puts it on par with even heavy-hitter titles like The Elder Scrolls Online, at least in terms of the enjoyment you’ll get out of the moment-to-moment battles.

Though the game is still in beta, Skyforge currently suffers from some glaring technical shortcomings. It would be almost inaccurate to say the game has lip-synching problems since many of the voice lines are so far off from matching up with the character’s facial animations that you can barely call it a form of lip-synching at all. For some strange reason, too, the game often blocks out the lower quarter of the screen during cutscenes or NPC conversations, for seemingly no other sake than to overcompensate for the subtitles. It’s small but consistent problems like these that show Skyforge still needs some work, even as a game that’s almost two years old already.

In brighter news, while the overbearing UI and elaborate menu systems of Skyforge have never been its strongest quality, Allods Team have nevertheless done a fine job in streamlining it for the console experience. Navigating the game’s menus is easy to grasp, and new mechanics are introduced steadily so that players are not instantly overburdened by the game’s many systems all at once.

Ultimately, Skyforge’s PlayStation 4 port doesn’t look like it’s going to be breaking any new ground compared to the relatively few MMORPGs already available on the console, as a title which largely adheres to standardized genre templates and conventions. Even so, there is quite a bit to like here, including the dynamic combat and the game’s pretty presentation of a sci-fi fantasy world.

It’s worth remembering that there’s always room for improvement even after Skyforge releases in full on the PlayStation 4, and Allods Team’s history with post-launch curation for the PC version suggests that this may well be the case going forward. While we didn’t see everything Skyforge has to offer, what we did experience seems to set the stage for a disjointed but generally enjoyable action-focused MMO.