That however was the case this past weekend as the first NHL15 review copies were placed in the hands of critics, and reports began to trickle in that the game was missing legacy features like awarding the three stars, creating a player, custom camera angles, and more. Fans of the annual hockey franchise took to social media creating hashtags like #BoycottNHL15 and #FireRammer (a reference to the game’s producer Sean Ramjagsingh who twitter handle is @Rammer34). Some fans, like the person behind @We_Want_EASHL, created social media accounts to request that their favorite modes be put in the game.

Jason Brathwaite and Jason Venture, who both live in the city of Montreal, decided to protest these missing videogame modes by actually protesting in front of a building that Electronic Arts operates. 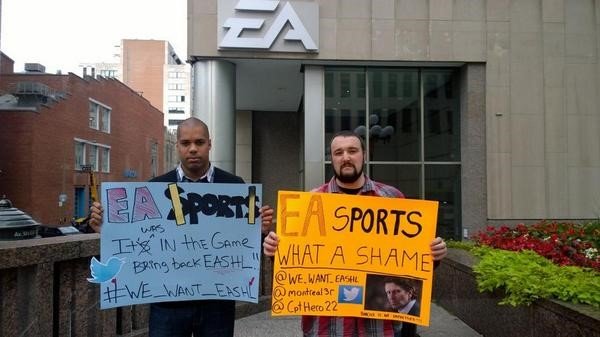 With so much anger and noise on the internet, how does one find the answers about the missing modes? We thought that the man taking all the fire would be a good place to start, so we tracked down the producer of NHL 15, Sean Ramjagsingh, to ask him what modes are missing and why?

Comics Gaming Magazine:  You guys had to leave some modes out of your game this year. I could go through the list, but why don’t you tell our readers what was left out, and more importantly why?

Sean Ramjagsingh:  The big ones that were left out were Online Team Play and the EA Sports Hockey league, which I know our fans are super passionate about and we’re committed to the EA Sports Hockey League. But working on the new consoles, when we stopped working on NHL14 and started working on NHL15, the new consoles had a lot of unexpected technical hurdles that we had to overcome. The great thing is that when you overcome them they open up a lot of new things that you can do, but sometimes the hurdles take a lot of time and a lot of resources. And with our dates, we have a set launch date of September 9

CGM: How did you decide which modes to cut and which to leave in?

SR: We had to make some decisions early about which modes were going to come over.  We have data on which modes people were playing, and how much they were playing. People think the mode they play is the most played mode, and when you look at the data that’s not always true. And everything we bring over we have to maintain year after year after year, which is not cheap to do as well.  So we wanted to become more efficient, so we could spend more time working on the cool stuff where fans are spending more of their time.

And the other part of it is that we’re rebuilding a technical foundation so we can do bigger and better things on this console; as opposed to porting everything over and being stuck with the same legacy code base.  Our game-play and presentation is fantastic and it’s still a full feature game. We have lots of different ways to play, lots of different modes in the game; whether it is be a GM, or be a Pro, or Hockey Ultimate Team, or Online Versus.  But the foundation we’ve built from a tech perspective allows us to do things bigger and better than before and really take our game to new heights on these new consoles.

CGM: This is the first time the NHL franchise is on the Xbox One and PS4. What does being on these new consoles allow you to do when compared to what you could do with the Xbox360 and PS3?

SR: It’s a whole new world for us. It allows us to do more of everything: running more math under the hood, having physics running all the time, having higher resolution textures, the ability to have 9000 new crowd models in there with specific animations and control over the crowd, more animations with our super-star skill stick. The puck physics is a big game changer as well. It really allows us to change the core game-play and presentation experience, and like I said before it really sets us up, from a game mode perspective, with the new tech to do bigger and better things moving forward.

SR: For me, throughout development, I see each of the different areas progressing forward and I’m seeing big wins. But at the end when it all comes together, and has to work together and get balanced; that’s the part I take the most pride in. The fact that it all came together: the game-play, the presentation, and all the different elements with-in those things and that it all works seamlessly. For me personally, that’s the most impressive part. It all came together, and the work that the team did to pull it all together and balance it near the end there is fantastic.

CGM: In order to keep our readers up to date, could you walk them through the new elements of this year’s game in more detail?

SR: The first thing is the next generation player model, which we’ve literally re-built from the ground up. We went from more of a Michelin man in Gen three, to a layered player model. We modeled the body, the equipment on top, and then dynamic cloth as well; so as the player moves the jersey is going to flow behind them in a realistic fashion.

Redoing our puck physics from the ground up as well literally changes the game. There are now more realistic bounces and the puck going places it has never gone before; and then the puck interacting with the player. Hitting the player’s jersey, or the goal’s jersey, and then the equipment underneath and reacting properly. So the puck physics really has changed the balance and the flow of the game.

New super-star skill stick, so more dekes in there. Really just focusing on giving the user more control, and the multiplayer physics as well. We were the first team sports game to have physics running in there, it was limited to two players being in physics at any one time on the old consoles. Now we can have all 12 players being in physics, so we’re seeing really cool things happening like: knocking one guy into another guy, or knocking over two guys at once, or having a small guy try to take down a big guy and fall over.

And then the presentation piece:  the authentic arenas, the crowd, the NBC presentation, and the video integration of the commentators. Which is something again that is a first for sports games, having the actual commentators in a virtual environment, so the package itself of game-play and presentation is something we’re really proud of.

CGM: Why put real commentators in a videogame? Did they not want to put on the motion-capture suit or something?

CGM: You guys have been making a big marketing push with the fact that you have authentic arenas in the game. Is every arena that is home to an NHL team in NHL 15?

SR:  So we have 30 unique arenas in the game. Unfortunately we could not license two of them: Chicago and Carolina. That’s just a licensing thing. As with anything that goes into the game there are contracts and there is paperwork that needs to get sorted out between the two sides. For many different reasons sometimes we can’t get a contract in place, so I am happy to say that we have 28 authentic arenas that are fully licensed and in the game; and, we’ll work on the other two going forward.

CGM: Since we’re conducting this interview on the ice of the Master Card Centre (the practice arena for the Toronto Maple Leafs) any chance of adding practice arenas in the future?

SR: Yeah, I think that’s a good idea. I think when you look at what people want to do; they want to practice with their team. I think practice arenas are probably the next extension and also looking at other leagues to and try to bring in some of their authentic arenas as well. Whether it will be the AHL, CHL, or some of the European leagues.