You, Me and an Interview with Patrick Gilmore 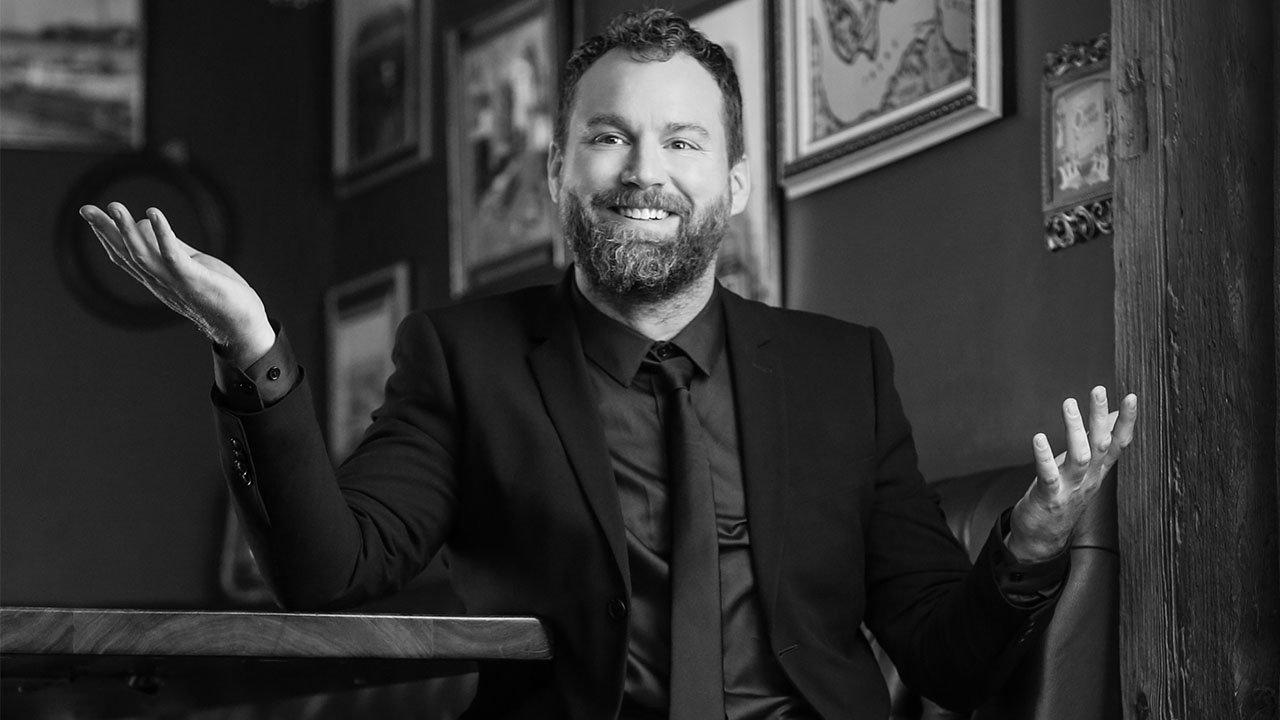 Anyone looking at a complete list of actors and various entertainers in the industry throughout the years will find a great number of them are born in Canada.

The Great White North is a deep ocean of talent from coast to coast and many of them still work here, producing shows and films that are loved across the globe. Patrick Gilmore is one of those great actors. His roster stretches pretty long but he is perhaps best known for his character of Dr. Dale Volker on Stargate Universe, and is currently working on two new TV shows. A romantic comedy called You, Me and Her and a science fiction time traveling show, Travelers.

CGMagazine: How did you get into acting?

Patrick Gilmore: I grew up on an acreage in rural Alberta so I spent a lot of time running through the fields with my best friends just playing with our imagination. When I was about 10 or 12 years old, my dad came home with a video camera and that kind of started my obsession. It just grew from there. I went into drama class in high school, then community theatre and then—it’s a drug. So I just kind of followed that addiction.

CGM: So you’ve always wanted to act? There was no other career you wanted?

Gilmore: I was kind of a late comer to the, “What should I do when I’m an adult?” decision. I remember hearing, “What are you going to do when you grow up?” when I was in grades seven, eight and nine; junior high. The questions just got more and more persistent in high school. Just to get people off my back I’d say, “I’m going to be an actor,” and it was the only thing I actually enjoyed doing other than sports. I wasn’t exactly sure if acting was what I wanted to do and I wasn’t even sure how to make a living out of it. I didn’t know anyone who did make a living out of it. Edmonton’s not really not known for its film and television production but it did have an amazing and (if not well-classed) theatre and festival community. I just told people I was going to be an actor and kind of made it up as I went. I managed to meet a number of influential people who pointed me in the right direction and before I knew it, I was in Vancouver, and had an agent, and was auditioning and…I’m still not convinced this is what I want to do.

CGM: How supportive was your family of your acting career?

Gilmore: My family was supportive to a fault. There were times in my acting career when I kind of wished my parents would sort of put their foot down and say, “No. You’re getting an employable degree from a university,” but they were so supportive, even though they had no access, or influence, or an idea of acting or how the film and television or acting community works. They said, “Do whatever you want if it makes you happy, absolutely.” They insisted I stay in school and get a degree, just as a backup plan, which is probably one of the better things I did because my degree is outside of the realm of acting. Just a General Arts degree in Literature and History, but I think that offered a grounding (and also a basis) in storytelling that has helped me. They’ve been my biggest fans my biggest supporters, even when I wanted them to kick my ass and tell me to get a real job.

CGM: Would you say your degree helped you understand and appreciate the medium?

Gilmore: Yeah I mean, literature and history really comes down to storytelling which is exactly what I do for a living. I tell stories, and so a lot of the time I’ve drawn on books I’ve read, or structure of plot, and it’s helped me immeasurably, probably more than most people who get General Arts degrees because you can’t really get a job in English, there’s no history job. This was probably one of the best ways to apply the degrees I had is in the art of storytelling, even though it’s a different medium. It’s something I’ve never regretted. I would love to go back to school as well.

CGM: Your new show Travelers came out, how did you end up landing that role?

Gilmore: I want to say I was lucky but I was lucky enough to audition and land a role in Stargate Universe. When Stargate ended, this huge family kind of went their separate ways… I [started] auditioning and Brad Wright (creator of Stargate Universe) to writing. Earlier this year, I bumped into Brad, and auditioned for Travelers and he said, “No pressure but I wrote this role for you.” He told me this as I was going into the audition. Brad’s like family but I love that they didn’t just give it to me, that I had to earn it. I had to audition a couple of times but yeah I guess it’s a role that’s been kind of peculating since Stargate ended six year ago.

CGM: What do you like about working on Travelers?

Gilmore: I like that even though it’s sci-fi, it’s a show that’s rooted in reality. It takes place in present day. We say if you watch the show with the sound off you wouldn’t even know it was a sci-fi show, and I’ve always said that sci-fi works better for me when it is rooted in reality. I don’t have to suspend my disbelief very much. I can relate to the characters, relate to theI know, reacting to things h situation, relate to the time and that’s what this is. David’s just a guy I know, in a world doesn’t understand and that’s exciting for me. It’s a lot more accessible to my imagination than, let’s say, put on this cape and tights; you’re a superhero. As much as I’d love to do that, there’s a big leap from getting to who Patrick is to getting to who a superhero is. Get me in a world I understand are start mixing it up very subtly and very darkly and very nuanced, and it’s the best sandbox to play in.

CGM: I notice you do a lot of sci-fi shows and movies. Is it a coincidence or do you going looking for that?

Gilmore: It’s more coincidence than anything. When you’re starting in acting you kind of say yes to anything that you can get your hands on, just so you can get the experience. I moved out to Vancouver when I started becoming an actor, and Vancouver has been put on the map by sci-fi. This is where the X-files was, this is where Outer Limits was, and of course Stargate.  It’s been this beautiful little hot bed of sci-fi and when you’re working in the city you’re going to end up in that genre. So as much as I didn’t choose to be connected to sci-fi, I love that I am, just given the fan base. The medical procedurals, or the police procedurals, as much as they have fans, they don’t have that community that gets together online and discusses theories and shipping. The fandom is so overwhelming and I got a good taste of it in Stargate Universe. People loved the show, and it was intimidating but when you get to meet them, who else is passionate about a TV show? In sci-fi there’s this built-in structure of community and family that know each other and support each other that I can’t seem to find in any
other genre. I’ve been lucky.

CGM: What has been your favourite project to work on?

Gilmore: That’s tough because I’m learning, every time I do a different role, I learn something new and that’s always very exciting. The roles I enjoy, the projects I enjoy, are the ones that challenge me and put me outside of my comfort zone. A role I had on The Killing was fun because that’s a role I probably wouldn’t have been cast in because I’m not normally seen like that, as an obnoxious billionaire, and I loved playing that. But I’d have to say that I’d have to go back to theatre. When I started it was theatre, and I played a woman, I played a 100 year old man, I played 15 year old kids, I played a father I played a son. You’re stretching your muscles and getting out of this cocoon of comfort that you had. Once I got into film and television, you start getting cast as neighbour, deputy, friendly neighbour, deputy number two, it’s a lot of the same stuff. Rarely do you get a chance to, when you’re starting out, to kind of push those boundaries and do something that you’re not even sure you can, that’s the fun part. It’s hard to pick one role or one project but I got to play a drunken karaoke singer once, that was fun.

CGM: Is there anything in the future that you’re hoping to be a part of?

CGM: Is there anything you’d like to say to anybody starting their acting career?

Gilmore: There’s no better time than now to get into film and television. When I started, getting a camera was a tough thing, I’m aging myself here but we didn’t have cell phones, let alone portable cameras. But now with the Youtube-oh my god, did I just say, “the” Youtube?

CGM: Yes you did.

Gilmore: Just put me in my grave! Given that iMovie comes with your computer, that your phone shoots better than anything that’s been accessible at home, anyone can start. When I started, I had to edit within the camera and getting a camera was complicated in itself. No one could watch my films because it was on a VHS tape that you’d have to lend out and it would be the only copy. Now anyone can do it so if you want to get started, just do it. There’s no one holding you back other than your own insecurities because you have it right in your pocket right now. Get a camera and just start filming yourself, putting stuff out on the internet and exploring what works and what doesn’t. The only way to do it is to do it.

Gilmore’s new show, Travelers, airs on Mondays on Showcase. You can also catch Gilmore on You, Me and Her.