Another year, another Call of Duty. And what’s a Call of Duty game without a few zombies? The popular co-op survival mode is getting an 80s-themed makeover in Call of Duty: Infinite Warfare, titled Zombies in Spaceland.

The story follows four aspiring actors who are invited to a mysterious movie theater by director Willard Wyler (played by Paul Rubens of Pee-Wee’s Playhouse fame). The actors are suddenly transformed into the aforementioned characters and must survive waves of the undead in a space-themed amusement park with help from a mysterious DJ, played by ultimate 80s icon David Hasselhoff.

A trailer featuring some of the ridiculous, tongue-in-cheek gameplay can be seen below: 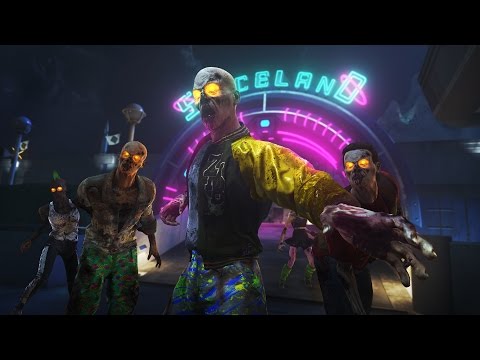 The Zombies mode has been a popular staple in the Call of Duty franchise since its original appearance as a bonus mode in Call of Duty: World at War. “Call of Duty and zombies in particular has such an incredible history with passionate fans, which inspired us to take all the co-op action that has made the series so great and fuse it with one of our favorite decades in pop culture: the ’80s,” says Brian Bright, Project Director at Infinity Ward. “Zombies in Spaceland is an all-new zombies experience where day-glow meets fright nights. It’s accessible for new players, but also has a deep layer of progression, brimming with easter eggs and various game features that will be a blast for hardcore zombies fans. We can’t wait for fans to go hands-on this fall.”

A special live stream will happen tomorrow on at 9AM Pacific Call of Duty’s Twitch, YouTube and Facebook channels; where comedian Jay Pharoah will speak with the game’s developers and show off more gameplay.

Call of Duty: Infinite Warfare is set to release on November 4th for PlayStation 4, Xbox One, and the PC.