The game will launch on February 14th and cost 4.99 USD and it is billed as a crossbreed of a visual novel, dating sim, and dark British comedy. In Purrfect Date you, a human, will get to date cats and uncover the dark secrets of the mysterious Cat Island. The game is developed by Bae Team, with publishing support from the BAFTA-winning Bossa Studios, the team behind Surgeon Simulator and I am Bread.

Purrfect Date is the personal pet project of Bossa Studios’ Oliver Hindle, and his girlfriend, Ruby-Mae Roberts. Looking back at the game’s origins, Roberts said that,“Oliver and I were lazing around one day, itching to play a game, but nothing really grabbed our interest, so we started talking about what we’d do if we could make the ideal game for us. Cats, intrigue, dating sims, the TV show Lost… all of these things became the ingredients that went into making Purrfect Date.” 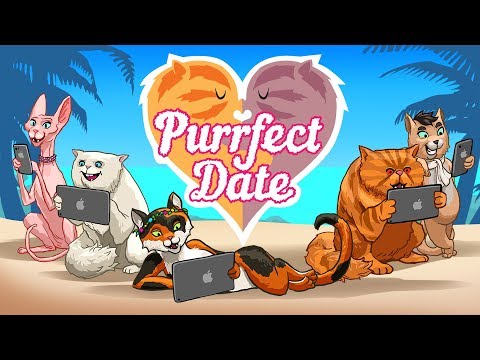 The game’s story lasts anywhere from 6-10 hours and is half the price of its Steam counterpart, which is currently listed at $9.99 USD. The game originally launched on Steam in December of 2017 to high user and cat acclaim.

Liked this article and want to read more like it? Check out Edward Bayley’s list of the Top 10 Cats in Video Games and Kenneth Sheppard’s review of Dream Daddy.