Darkrai Is Coming To Pokken Tournament

It’s no secret that I love Pokken Tournament; what I thought would be a typical fighter bearing the Pokemon brand, which actually had a lot of depth and was above all, very fun. But like many, my biggest problem with the game was what felt like a lack of characters, until now as the Nightmare Pokemon, Darkrai is being introduced into the game.

Bandai Namco announced the release of one of my favourite Pokemon through a trailer on their official Youtube page. While as of now, Darkrai will only be released in the Japanese arcade version of Pokken Tournament, a recent datamine suggests that files for Darkrai do exist within the Wii U version. The datamine also includes files for Scizor and Empolion. 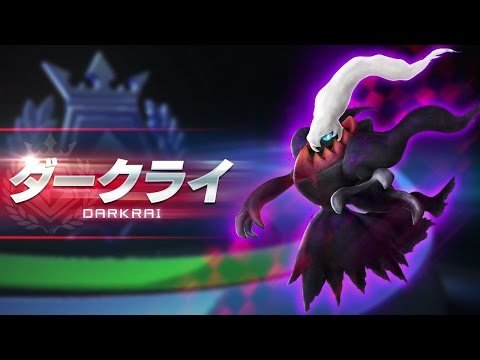 As well as Darkrai, the Japanese arcade version of Pokken Tournament will receive Garchomp, Braxien and Shadow Mewtwo; characters which were previously only available within the Wii U version.

Darkrai was well known as the “Freddy Kruger” of the Pokemon universe as the ghost-type Pokemon which caused nightmares to humans and Pokemon alike. Almost all of Darkrai’s moves consist of putting its opponent to sleep with its 100 per cent chance to hit attack “Dark Void” then dealing damage over time throughout the fight with its passive ability “Bad Dreams” and its “Nightmare” attack.

Within Pokken Tournament, Darkrai’s moves seem to reflect his style of play, leaving small traps and reality rifts within the battlefield and dragging opponents into the abyss to unleash a maelstrom of shadow-based attacks.

Darkrai was introduced within Pokemon Pearl/Diamond and was one of many Pokemon that could be caught through special events. While the data for these Pokemon did exist within the American versions, the events were exclusive to Japan (while access to the items which unlocked these Pokemon could be attained through Action Replay).