Dead End Job is a procedurally generated twin-stick shooter which tasks the players with the difficult job of exterminating paranormal ghouls with a large portable vacuum cleaner, reminiscent of Nintendo’s original ghost busting title for the Nintendo Gamecube, Luigi’s Mansion. The game uses a very highly detailed, cartoon quality art style that harkens back to classic cartoons like Ren and Stimpy. Music for the title will feature original compositions by Will Morton, audio designer for Rockstar’s Grand Theft Auto series. A unique feature to the game allows for Twitch integration, letting viewers help or hinder the streamer’s progress by being able to choose their powerups, a new form of interaction that adapts to how popular streaming has become in the modern era of gaming. 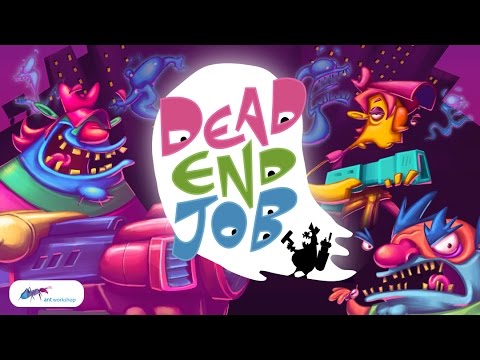 Ant Workshop was formed in January of 2015 by Tony Gowland who wanted to create interesting games with an off-beat sense of humour. Dead End Jobs will be the company’s third developed game since its founding.  Their last title was Binaries, a difficult 2D puzzle-platformer released on PC in April of 2016 and on PlayStation 4 and Xbox One. The game has players controlling a separated orange and blue ball at the same time through increasingly difficult stages, offering up to 100 levels. Before that, they made Run From the Sun, which began as a Flash game in 2011, where players would use the gravity of different planets to propel their spaceship forward while picking up a number of different collectables along the way. While the original was an endless runner, the game was modified to have an ending when it officially launched for free on mobile devices in January of 2017.

Dead End Job is planned to see a release on PC, PlayStation 4 and Xbox One early next year. A preview of the game will be shown at London’s gaming event, EGX Rezzed, next month