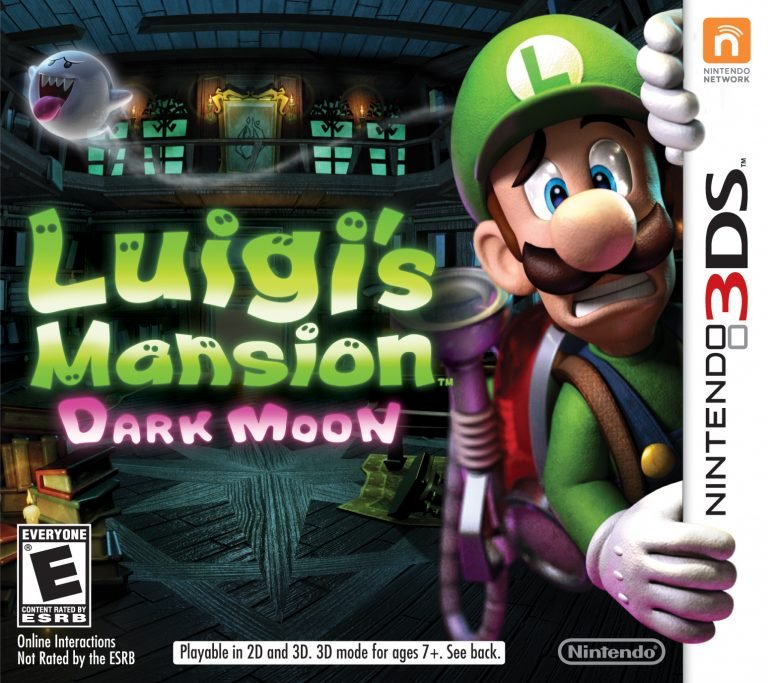 Oh Luigi, you’re one of the most famous faces in Nintendo’s cast of characters and yet you remain a perpetual second banana. Sure, you’ve gotten a couple of solo ventures like the disastrous Mario Is Missing (seriously, what were they thinking?) and the underrated Gamecube cult classic Luigi’s Mansion, but you’ve never really been allowed to be the star thanks to the overshadowing princess-saving exploits of your brother. Well, at least that was true until now. Luigi’s Mansion just got a belated sequel on the 3DS where the glasses-free 3D technology originally intended for the Gamecube is operating in full effect. It’s also one of the best games yet released for the sweet little handheld and is officially a title that must be on the shelf of anyone who owns a 3DS. This is a goofy, endlessly fun, slightly spooky, and visually gorgeous adventure that finally gives Luigi a game that will make Mario jealous. Sure, the guy still doesn’t get to find love like Mario and that’s sad, but Luigi just might end up having his own franchise as a ghostbuster if this sucker sells through the roof like it deserves. 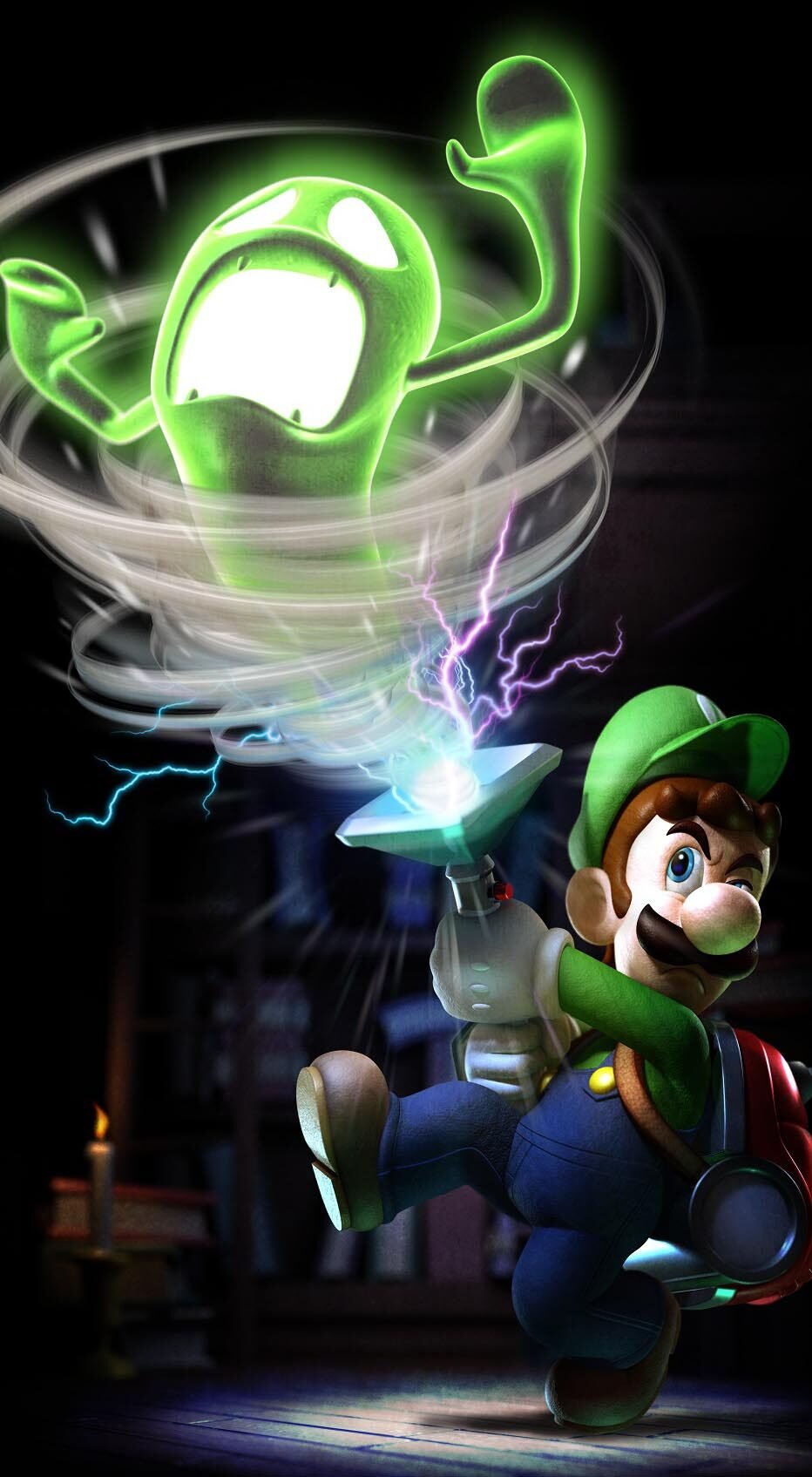 Luigi’s Mansion: Dark Moon (known simply as Luigi’s Mansion 2 outside of North America for reasons best known to Nintendo) takes everything that worked about the original Gamecube game and amps it up to glorious levels. Once again, Luigi has been chosen as a ghost hunter for the somewhat creepy manchild scientist Professor E. Gadd. You’d think Gadd would choose someone who isn’t terrified of his own shadow for ghostbusting missions, but he seems to take sadistic pleasure out of shoving a pants-wetting Luigi into spooky scenarios and you will too. From an all-seeing hub world, E. Gadd sends Luigi into no less than five separate haunted houses, each with its own unique defining traits. Armed with his trusty ghost-sucking vacuum, The Poltergust 5000, and a ghost-freezing flashlight, Luigi sets out to remove all the ghosts from the spooky houses and bumbles his way to success every time. That’s pretty well all there is to it in terms of story and thankfully, that’s all you need.

The first thing you’ll notice about Luigi’s Mansion is how absolutely gorgeous the visuals are and Next Level Games ensured that’s true from start to finish. Each haunted house is filled with creepy shadows, cowering ghosts, and hidden secrets to be discovered and it can be a joy simply to wander around and let the incredible design work tickle your eyeballs. Luigi himself is animated with an incredible amount of character; from his silent movie comedy run, to his gentle screams of panic, and his playful humming of the game’s theme music when he gets nervous. All of the ghosts and bosses are animated with the same care and as a result this just might be the prettiest game to appear on the 3DS yet and the incredible level of polish was well worth all of the production delays. The 3D is employed well, with each room feeling like a little diorama to explore with ghosts and surprises designed to pop off the screen. The franchise always seemed ideally suited to the 3D gimmick and Next Level/Nintendo ensure that it’s used to maximum effect. If you’ve been seeking a game that shows off what the 3DS can do, this is it. 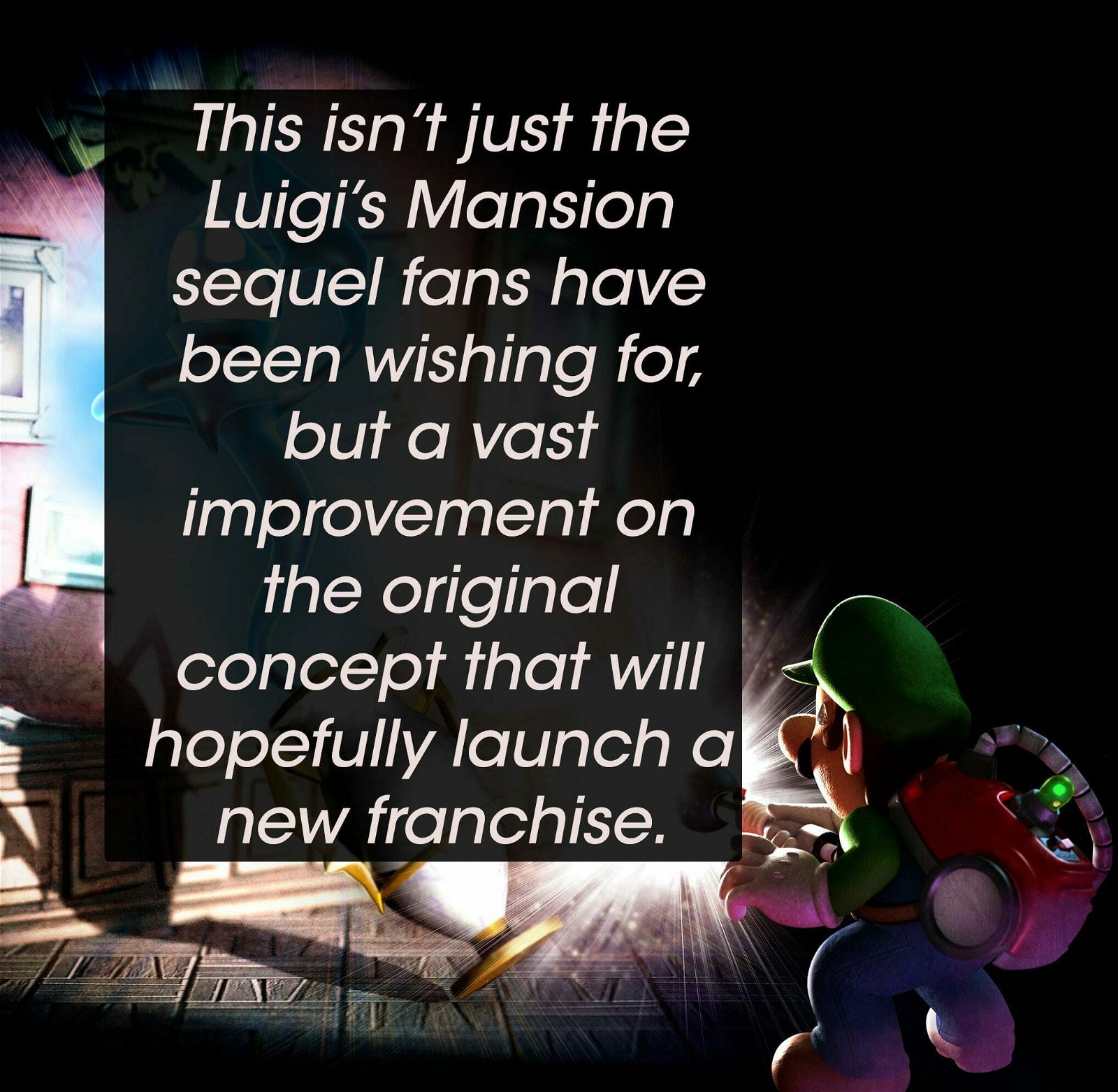 In terms of gameplay, if you loved the original Luigi’s Mansion be prepared for more of the same in the best possible sense (along with a few new surprises). Basically, it’s a puzzle/adventure game with Luigi constantly trying to figure out how to access locked rooms and hidden passage ways to find/trap a whole bunch o’ ghosts. By moving around the 3DS, gyro controls allow you to peak into the rafters for secrets and the new Dark Light Device shoots out a rainbow light that spots invisible walkways and other hidden treasures. Once you find your ghosts, you use the right trigger button to suck them up while pulling them around with the circle pad to loosen up their defenses. You’ll also be using the “blow” option on the Poltergust vacuum to inflate balloons and perform other functions. The central controls n’ options are simple, but the designers have come up with brilliant ways to change things up so it never gets tedious to play. There are five haunted houses total, each with their own unique design and challenges (one covered in ice and other overrun with a garden boasting Little Shop Of Horrors style carnivorous plants, etc). The puzzles can be tough and you will inevitably get stuck, but the solutions are always deceptively simple and amusing to prevent frustration from setting in.

The game is surprisingly packed with content, especially compared to its predecessor which now feels like a miniscule trial run in comparison. Playthrough could take anywhere from 10-14 hours depending on how slow you are at solving puzzles and yet this thing never feels padded. The designers had far too many ingenious ideas for that and threw them all into one epic haunted house romp. When you’ve finally finished the main story, there’s an amusing multiplayer mode to enjoy that allows up to four players to ghostbust together locally or online (co-op and competitive options are available). It’s an amusing bonus that adds additional play value; however, it is designed to play best with 3-4 players, so don’t expect to get much joy out of tackling this solo. The whole package is undeniably impressive and while there are problems (too much gyro here, too confusing of a puzzle there), none of them are more than momentary distractions.

I’ve been anxiously awaiting a Luigi’s Mansion sequel for years and was positively giddy when Nintendo revealed their plans for a 3DS revival. I’m thrilled to announce that the results deliver on the promise and then some. This isn’t just the Luigi’s Mansion sequel fans have been wishing for, but a vast improvement on the original concept that will hopefully launch a new franchise. Luigi finally has a mini-masterpiece of his own to prove he doesn’t always need Mario around and the 3DS has a franchise ideally suited to the new system. Hopefully this won’t be the last time Luigi is forced to fumble his way through a ghost hunt. Nintendo and Next Level Games delivered a truly magical, funny, spooky, challenging, beautiful, unique, and just plain awesome game to make all us 3DS owners happy we invested in the system. By it, love it, and don’t be embarrassed to jump n’ giggle while playing it in the dark, even if you’re technically an adult. With a game this well produced, you owe it to the designers to look silly when they deliver the goods.