A sequel to successful Warhammer: The End Times – Vermintide is coming.

Indie developer Fatshark has announced that a sequel to their first person Warhammer Fantasy title is in development. The title will go under a shortened title, simply being Warhammer: Vermintide 2. Details on the upcoming title are sparse but a Steam page for the game has gone up along with a teaser trailer and some screenshots. Warhammer: Vermintide 2 promises the same unique co-op experience that was found in the first game. 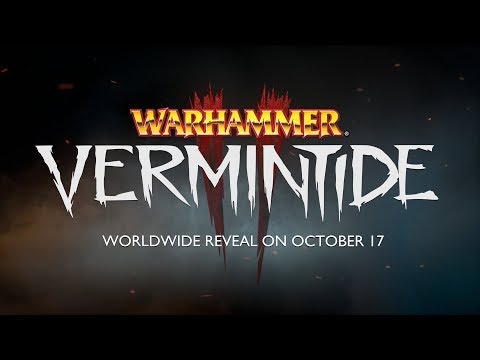 Warhammer: The End Times – Vermintide originally released on PC in 2015. Set in the Warhammer Fantasy universe, the game takes on an exclusively multiplayer structure. Up to four players can work together in order to fight against the Skaven, a race of rodent-like monstrous creatures. At the end of each match, players are given the chance to roll a dice and be rewarded with a random weapon.

Warhammer: The End Times – Vermintide was developed by Fatshark with the help of Warhammer Fantasy creators Games Workshop in order to ensure that the game remains faithful to the series’ lore.  Upon release, Warhammer: The End Times – Vermintide received praise for its gameplay and progression system, along with its impressive graphics and map design. The game was released on PlayStation 4 and Xbox One a year after its original release. Since its original launch, the game has sold over 1.5 million units worldwide.

Warhammer: Vermintide 2 will have more details revealed via a live stream being held on Fatshark’s official Twitch channel on October 17, 7 PM CET. The game will be available on PC as well as consoles.